Viggo Mortensen On 'The Road' And The Importance Of Human Connections 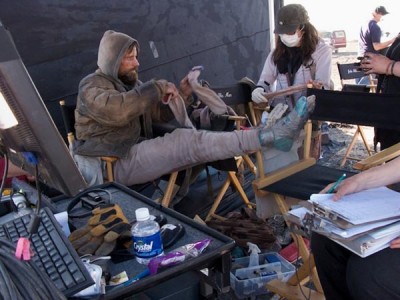 Image Macall Polay.
© 2929/Dimension Films.
At first glance, the actor Viggo Mortensen looks like just another celebrity. Strikingly handsome, the star of the Lord of the Rings movies is standing on the sidewalk outside the Regency Hotel on Manhattan's Park Avenue, taking a smoke break in his stocking feet. Adorned in a colorful soccer jersey, he's hard to miss.

The shirt's colors, bright stripes of blue and red, are those of the San Lorenzo soccer team in Buenos Aires, where Mortensen spent part of his youth.

"They're my childhood and adulthood idols, they can do no wrong. That kind of unconditional support I don't have for everybody," said the actor, sitting down for a long and rambling conversation in a restaurant inside the hotel.

It's hard to picture Mortensen, a quiet man who speaks with sensitivity and intelligence, as a rowdy sports fan, but the 51-year-old native of New York City, Venezuela, Argentina, Denmark and finally Watertown, N.Y., is a collection of contradictions. Not one for doing a lot of film publicity, here he was talking up his latest movie, The Road, with considerable enthusiasm.

"It's been three months straight, which is a lot for a small movie, but I think it has such an emotional impact and makes you think about life in a truly profound way, something that most movies don't do," said Mortensen.

The Road, which is now in theaters, is an adaptation of Cormac McCarthy's Pulitzer Prize-winning novel about a father and son trying to survive in a grim, post-apocalyptic world of death and destruction.

"I read it right after reading the script, same day, because I wanted to see if they chose well in their adaptation," said Mortensen. "I think it's the most faithful adaptation of a book that I've ever been involved in, including The Lord of the Rings, which was great and very true to Tolkien's spirit, but liberties were taken for the medium that were not taken here. If you loved this book and were moved by it, I think you'll feel very much the same about the movie."

While Mortensen acknowledges that audiences will likely go into The Road prepared to compare it to other genre pictures like the recent 2012, the actor emphasized that his film is not about the spectacle.

"You're not just going, 'Wow, look at that special effect.' It's not that. It's not about any particular iconography. We shot in New Orleans, we shot at Mount St. Helens, but it's anywhere," he said. "If you look around any major city there's a lot of people who live that way already, outside, no shelter. They have to scrap for food, and whatever possessions they have they have to keep them from being stolen by others."

"In the end," said Mortensen, "The Road is about the importance of human connection," a message he believes is more appropriate today than ever.

"Maybe they get to this place, the sea, and it's just as desolate and inhospitable, unfriendly, miserably cold and dangerous as anywhere else. And then what? And THEN what? Maybe it's what we already have, which is each other, simply," he said. "That's what happens in hard times. You hear stories about the Depression -- 'Well, we didn't have much, but we shared what we had and we had each other's company,' which in the end is the main thing, isn't it?"

During the film's grueling shoot, most of which took place in parts of Pennsylvania where burning coal mines have rendered large swaths of the landscape uninhabitable, Mortensen and his co-star, Kodi Smit-McPhee, who was 10 years old at the time, depended a lot on each other.

"Most of the time the weather was terrible, it was snowing or raining. We were always wet, we were always freezing our asses off. As Kodi said, 'It's a lot easier to be cold than to pretend to be,'" said Mortensen. "It's been a while since we finished so I've had some breaks, and I've appreciated being around my family in a different way after this experience. And I've recovered, but it took me longer than with most movies, I have to say, which is fine. That's part of it, you know, this journey."

During this interview Mortensen returned often to the concept of a journey. In addition to acting, Mortensen is also a photographer, a painter, a musician and a poet, and he sees all his creative pursuits as interconnected. While shooting The Road, he said, he took fewer photos than usual, "because I was too tired and I really wanted to stay in that world." But he did write quite a lot.

It's a creative thought process that he highly recommends, by the way.

"Kids all draw and make believe, but they don't make that separation -- 'Oh, these kids are artists, I'm not' -- when they're 6 years old," said the actor. "It's simply about paying attention to what's happening and having a reaction to it. It's how you walk down the street in New York City. It's how you go to the movies, even a bad movie. Everybody is an artist, I think. It's only that many people choose to think that they're not."
Top of this page
Last edited: 15 February 2011 10:59:30