On The Road, Signs Of The Apocalypse Hit Home 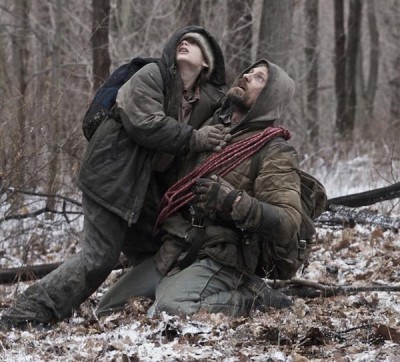 Image Macall Polay.
© 2929/Dimension Films.
To create the post-apocalyptic world of The Road - the new film based on the Pulitzer Prize-winning novel by Cormac McCarthy in which an undefined cataclysm has incinerated most life on Earth - director John Hillcoat (The Proposition) didn't have to use elaborate sets or expensive computer-generated imagery. He simply pointed his camera at landscapes that man or nature had already blasted. "We did an extensive tour of apocalyptic America," Hillcoat said during the Toronto International Film Festival. "These weren't global apocalypses, they were smaller-scaled. But when you're in the middle of one, if feels the same."

He and his stars Viggo Mortensen and Kodi Smit-McPhee - who play a father and son (known only as The Man and The Boy) struggling to find food, shelter and some measure of humanity in a world where the sun never shines and most survivors have turned to cannibalism - went to Mount St. Helens in Washington State, where a 1980 volcanic eruption had snapped the tops off trees or uprooted them violently, and littered the mountain roads with logs, boulders and gravel. They shot at a former strip mine in Pennsylvania, and in post-Hurricane Katrina New Orleans. Also in Pennsylvania, they found a picturesquely decaying section of interstate highway with mountain tunnels that had been abandoned when the turnpike was rerouted in the 1960s.

"It was an amazing experience to see all these fly-over zones that have been neglected and are actually devolving," said Hillcoat. Born in Queensland, Australia in 1961, he's no stranger to surreal landscapes: He spent 10 years (from age 7 to 17) in the steel town of Hamilton. From an early age, his parents took him, "probably inappropriately," to seminal films including 2001, Bonnie and Clyde and The Godfather, and the films "blew me away," he said. "It was such a huge, awe-inspiring experience that I never thought I could go there." Then an art teacher (whose name Hillcoat wishes he could recall) at Hamilton's Sir John A. Macdonald High School gave him a can of film for an animation project, "and that was the turning point," he said. He moved back to Australia and went to film school.

Hillcoat read The Road as an unpublished manuscript and fell under its "poignant, ancient, visceral" spell. "We didn't want to use a CGI world - well, we didn't have the budget, for one thing," he said. "But a CGI world is alienating, even if the audience only feels the difference unconsciously. Also, unlike most post-apocalyptic stories, this is not science fiction. It's more about America today, our own fears."

"In the beginning, you think it's just about surviving," said Mortensen, 51, whose recent work includes The Lord of the Rings trilogy and two David Cronenberg films, A History of Violence and Eastern Promises (the latter netted him an Oscar nomination). "My character keeps saying, 'We're going to survive this,' and his wife [played by Charlize Theron] keeps asking how and why. But by the end of the movie, though the 'how' is still up for grabs every day, I definitely know the why: It's to carry the fire. It's to love, to feel compassion, to know we're different from mere animals. And when my character starts to forget, Kodi's reminds him."

Mortensen has a son, Henry, 21, with his ex-wife Exene Cervenka, lead singer of the punk band X. Between takes, Mortensen and Smit-McPhee - 13, Australian, and currently shooting an American remake of the Swedish vampire film Let the Right One In - tried to keep things light, staging sword fights with sticks or teasing cinematographer Javier Aguirresarobe (who was constantly preoccupied with rigging up contraptions such as the padded camera he affixed to a tree limb to capture a terrifying scene in which a forest full of trees crashes down).

But Mortensen had lost a lot of weight to convey The Man's starvation - "I just ate less, basically, before we started shooting," he said, shrugging - so he felt unusually tired for most of the shoot. "It was something I had to do, having committed to the movie - that leap of faith that takes you a little further," he said. "My best movies, I look at them years later and think, 'I was kind of another person then.' At certain points, it's beyond you. It transports you. That's the magical thing about telling stories in movies, and even going to movies - there's something else that happens. You hope. Because you want to be transported. You want to come out feeling different."

Even if that means carrying the story's pain home, which Mortensen did, while filming The Road and for some time afterward. "I don't mind taking it home," he said. "Yes, I had some weird dreams, and it made me sad to think about my family, life, death, the world. But it was okay, I could be sad. It's part of my job, and it's also part of my life. I make an effort to remember as much as I can. As humans, our memory is faulty. We're deconstructing everything that happens to us all the time. And once it's gone, it's gone. So I'm not in any hurry to forget how it felt."

Mortensen speaks thoughtfully, softly, with a slight Spanish inflection picked up during a childhood spent partly in South America. He has a crow tattooed on one arm because "I've always liked crows," he said. "And it happens to be the mascot of my favourite soccer team," Argentina's San Lorenzo. In addition to being an actor, he's also a poet and a painter (for the film A Perfect Murder, he made all of his artist character's canvases). Is that why he's drawn to playing men of few words?

"Maybe," he replied. He paused just long enough to let the joke sink in, then continued. "The challenge of acting with fewer words is the same challenge I'm drawn to when writing poems. There's no room for error. When you have few words, you shouldn't screw up even one." He's never been shy to explore darkness in his movies, but lately he's felt that tug more personally. "There's been a certain amount of illness in my family, people have passed away, a lot has gone on in the past two years. So it didn't take much for me to go to those [bleak] places. But I'd never been in a movie that was as emotionally draining as The Road." He laughed. "I probably need to see a doctor soon."