King of the big screen a champion of poetry: Blake's poetry makes an impression on Mortensen 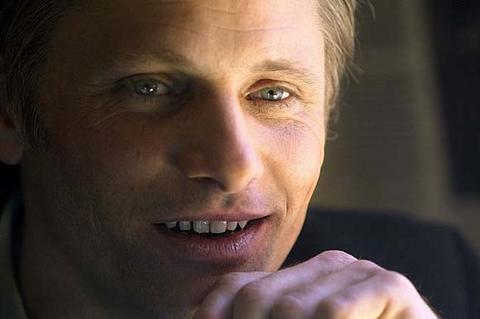 Image Lea Suzuki.
© San Francisco Chronicle 2004.
A black SUV pulls up across from City Lights, and Viggo Mortensen hops out. I suggested meeting at the North Beach bookstore to get away from the hotel where's he's stuck promoting "Hidalgo" -- a sort of "Seabiscuit" in the sand in which he charms the stirrups off a horse. Mortensen, a poet who read at City Lights five years ago, is delighted to return, and, surprisingly, Disney, which has $90 million invested in "Hidalgo," allows its star to go off subject for an hour.


Mortensen -- in a well-tailored plaid jacket (no grunge look for him) and looking slighter than he does on screen -- leads the way upstairs to the poetry room. He immediately heads for the used-books bin. "I might find something out of print or something I haven't noticed before," he says, perusing titles with experienced eyes.

A voice calls out, "Hey, aren't you John Waters?" Mortensen smiles and shakes hands with a City Lights employee, who identifies himself only as Peter M. "I sound more mysterious that way." He hands Mortensen $124.41 in cash, residuals from CD sales of his poetry reading. Mortensen says he'd be happy to do another reading in the spring. "That won't work. I'm already booking June," M. replies. You've got to love City Lights for not dropping everything for a movie star.

Since he starred in the "Lord of the Rings" trilogy, Mortensen's readings have played to standing-room-only crowds. "I've been asked, 'Doesn't it bother you that most people come because of the movies,' not because of my poetry? But it doesn't matter to me, because once they're there, they listen to the poems. I bring other poets along, and they listen to them, too.'' I ask Mortensen to pick out his favorite poets. He hesitates. There are so many, he says, he wouldn't know where to begin. Just then an older woman who has an obvious familiarity with the poetry section selects a William Blake volume and settles into the room's only comfortable chair. Mortensen, who believes everything happens for a reason, is convinced she's showing him the way. He reaches for another Blake collection and turns to "America: A Prophecy," a poem that eerily seems to predict the Sept. 11 terrorist attacks.

"Fury! rage! madness! in a wind swept through America," Mortensen reads in almost a monotone, letting the words speak for themselves.

"And the red flames of Orc that folded roaring fierce around / The angry shoes, and the fierce rushing of th' inhabitants together: / The citizens of New-York close their books & lock their chests."

The woman in the easy chair listens intently. Does she recognize her fellow Blake enthusiast? "No," she says. I tell her. She looks impressed, but I have a feeling she's making a mental note of Mortensen's name to ask someone who the heck he is.

Mortensen makes one last survey of the shelves in search of his poetry books. Not finding any, he says he'll send the store some. I brought along a copy of his "Coincidence of Memory" just in case. The book contains his photographs as well as poems, which he has serendipitously matched up. A picture of the sea is paired with an untitled poem that starts out, "Oceans take our secrets," and ends with, "Once I found a wedding ring uncovered by the receding tide. I didn't touch it. I was already married." "I wrote that a long time ago," said Mortensen, who's been divorced since the early '90s.

As a teenager, he found poetry boring. But in his 20s, after experimenting with short stories and novels, he was drawn to the economy of a poem. "Everything else seemed glaringly overwritten," he says. Mortensen will return to his old poems and delete a word here and there. He takes a similar approach to acting, stripping away emotions.

Mortensen, who also paints and runs a small publishing house, Perceval Press, has been warned about spreading himself too thin, especially now that his acting career is in high gear. But he sees his creative endeavors as related. "It's all about paying attention to your surroundings," he says. "I make a concerted effort to take part in my own life. If I have an idea I want to write it down or it may inspire me to take a picture or give me insight into a character. I find it a relief to turn my attention from one thing to another.''

Before we part, Mortensen insists on buying me Blake's "The Complete Poems," marking the passage he read. A moment later, he's back with Pablo Neruda's "The Book of Questions" and Perceval Press' "Twilight of Empire: Responses to Occupation." I protest mildly, accepting his presents but telling him, "Please, no mink coat.'' As I leave with my bundle, he's loading up more books for himself. That's when it comes to me: Mortensen is determined to pour every cent of his residuals back into City Lights. Have I mentioned what a good guy he is?