By Bernard Genin - translated by Chrissiejane 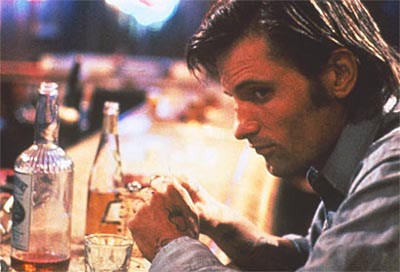 © Westmount.
In deepest night, in slow-motion, occasional flashes of light reveal a youthful Indian with a painted face, chasing a stag. The young warrior fells the animal, and as it dies of exhaustion, steals its last breath with a kiss. These rites of passage, undergone in earlier times by young Plains Indians, provide the opening sequence for The Indian Runner, Sean Penn's first film as a director.

Dissolve to the next scene: the territory where these customs were enacted is now called Nebraska. We are in 1968, in Plattsmouth, a little American town in the grip of winter. Ex-farmer, Joe, in his thirties, has had to retrain as a policeman. He needs to make a living! He is married to Maria, a beautiful Mexican girl, and they have a little boy.

Today, the door to the family house is adorned with a large banner: "Welcome Home, Frank". Frank is Joe's brother, his accomplice through hundreds of childhood scrapes, who, after three years absence, is returning from Vietnam. In another house a little further away, at the window, Frank and Joe's father (Charles Bronson, remarkable in an atypical role) seems uneasy as he awaits the arrival of his second son. Frank, the non-conformist, the hot-head, has always been a rebel. What will he be like, after three years in Vietnam? How will he re-adapt to the dull little life of Plattsmouth? Anyone inclined to equate Sean Penn with the somewhat simple characters he has often played will be surprised.

Granted, there is a thug in The Indian Runner, but what especially hits you is the fervour with which Sean Penn paints the picture. The Indian Runner, is the voyage, at the end of the day, of a free spirit, Frank, who will stumble his way all around this profound little corner of America. A dulled America where ugliness triumphs, where one dies a little of boredom, and where you want to scream without knowing why...... Where nobody puts an end to their lives violently.

It's logical to suppose that Sean Penn likes his actors. He gives them long scenes, allowing them to bring their characters to life. So, you enter into their dramas; you share their world-weariness.

There are poignant scenes in which Joe tries desperately to communicate with this brother, shattered by life. But Frank has cut himself adrift. Nevertheless, he makes an effort. Between two of his criminal offences, which habitually lead him into the police station, he finds a girlfriend. But Dorothy (Patricia Arquette, Rosanna's sister) fails, despite her talent for patience, and even though she is carrying Frank's baby, to prevent the shipwreck. Sitting next to his brother in a car, Frank breaks down into sobs. He reproaches Joe for losing his old fire, for resigning himself to a life of banality. "There are two types of man in this hell-hole" he says" heroes, and outlaws." Of the two, he has made his own choice.

After a last violent fight, Frank, face covered in blood, finally merges with the indian runner, in whom he seeks to rediscover some dignity. He sets off on a desperate flight, which enables Sean Penn to present a beautiful but somewhat contrived scene in slow-motion of a flashback to childhood. Because Sean Penn has the blues. Like his friend Cassavetes, a constant presence in this film, he has chosen to communicate his sadness with a beautiful film, serious, filled with despair, running totally against the current trend in American cinema.
Top of this page
Last edited: 6 February 2011 05:50:40