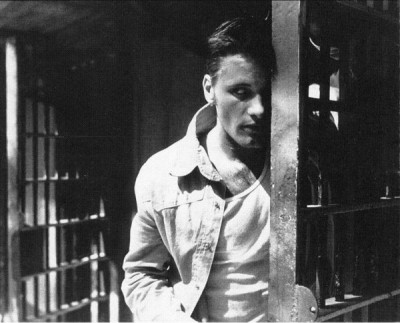 © Empire pictures.
The Halloweens and Friday the 13ths and their infinite sequels get all the limelight, but it's the genre-busters that inhibit the horror film as alive and kicking (or is that windfall?) as Jason Vorhees himself.

Take Prison, for instance. On the surface -- ads, previews, no-name cast -- it may look like every other cut-'em-up on the market, but it's really something more and something better. A thoroughly credible hybrid of the prison film and the supernatural, it has plenty of shocks, of course, but also an actual story.

Prison, played out in the now-abandoned but still chillingly gothic Wyoming State Prison, starts off with a sizzle as inmate Charlie Forsythe is electrocuted for killing another inmate. Ethan Sharpe, the prison's notoriously brutal guard, watches coldly. It's 1956, and soon afterward the prison is closed down.

Thirty years pass, and suddenly the prison must be reopened because of overcrowding. Sharpe comes back, this time as a notoriously brutal warden -- he's given to such acts as burning the inmates' bunks and then gleefully pointing out, "Now you don't have cells, you have cages."

Sharpe's been having bad nightmares, but they're soon outstripped by reality as guards and inmates alike start meeting grisly demises (as good as the best demises in Nightmare on Elm Streets 1 and 3). Turns out that maybe Forsythe was innocent.

So far, so so: The revenge plot is makeshift and certainly not unknown in the horror genre. What makes it work here is the skill and energy of a young director, Renny Harlin, and a surprisingly decent ensemble. Harlin, a Finn whose first feature was Born American, not only captures the claustrophobic containment and dark mood of prison but moves his players around like a chess master, including some four dozen real cons who give Prison that genuine lived-in look.

Among the pros, Lane Smith is buggy as the warden who's run out of time, and Viggo Mortensen is something of a find as Burke, an inmate apparently bred on James Dean and Montgomery Clift films. All the supporting roles are solid as well. As for the Spirit of Forsythe, he's not just another masked menace or a flesh-rotted presence, but more of a malevolent specter à la The Keep. When his hell breaks loose, it's quite chilling.
Top of this page
Last edited: 24 February 2011 13:46:53