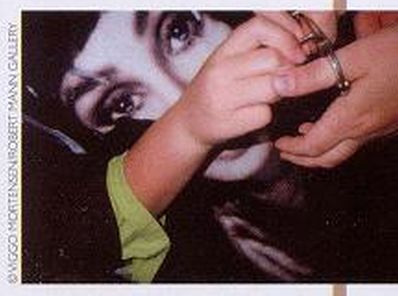 After starring in movies like A Perfect Murder (with Gwyneth Paltrow) and Gus Van Sant's remake of Psycho, actor Viggo Mortensen, who has been photographing for years, recently debuted with an exhibition at the Robert Mann Gallery in New York City. We asked him some questions about his art-the photography part, not the acting.

What was it that inspired you to start making photos?

Nothing in particular. Perhaps it has something to do with a sort of incurable, persistent nosiness.

How often do you find yourself photographing?

Whenever I can find the time. I usually have a camera with me wherever I go, whatever I do, and I take pictures when I can.

Style? That is one of those words that can more or less be understood, but never satisfactorily explained. I don't have a clue. I instinctively feel it is a subject best left to others, lest inordinate vanity of self-examination poisons what little remains unfettered and spontaneous in one's work.