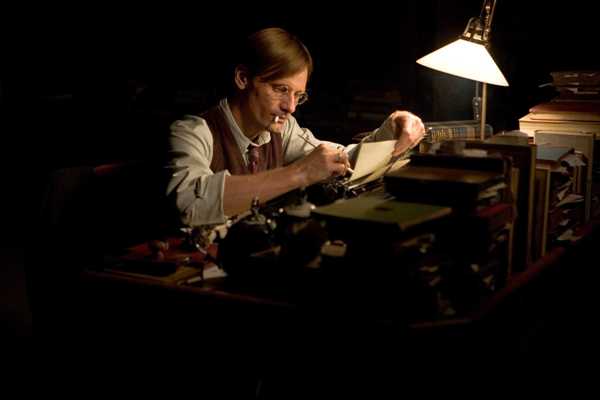 Image Larry Horricks.
© Good Films.
Here is the latest furrowed-brow drama examining the moral dilemmas faced by ordinary people in Germany's turbulent 20th-century history, one of a flood that shows no sign of abating. As in The Reader, the necessity to have all the dialogue in English means that there's something inescapably inauthentic about the film from the start; everyone talks in that careful stilted voice to ram home the fact they are not using a pantomime Chermin ecksent. And it takes a long, long time to get going; the ponderous, stagey feel is no doubt down to the fact it is adapted from a play by Scottish writer CP Taylor. But, to its credit, Good is at least a piece with something serious to say, with little of the meretricious responsibility-deflecting that The Reader dealt in.

Viggo Mortensen plays in a low key throughout, as a bespectacled professor called Halder who finds himself co-opted into the SS as a result of a bizarre literary coincidence: the ministry of propaganda has taken a liking to a novel he wrote as a young man, reflecting on the (as it happens, very contemporary) subject of assisted death. Halder was writing imaginatively about his dementia-beset mother; Goebbels, of course, is interested in the intellectual justification for euthanasia of the mentally ill. As the Nazi regime evolves, Halder can only stand by, almost in disbelief, as his career takes off.

In the traditional manner, the supporting cast is almost entirely British; Jason "Lucius Malfoy" Isaacs is probably the pick as Halder's raffish Jewish friend who resents being forced out of the country. The points Good makes are hardly original - very much along the "evil prevails when good men do nothing" line - and there's a lingeringly old-fashioned atmosphere overhanging it, perhaps because the play was written in 1981. But the gradual accretion of detail makes its chronicle of moral compromise appear, if not exactly plausible, then certainly well thought-out and absorbing.