By Valeria Melon - translated by Ollie, Rio, Sage and Zoe

Source: La Nacion
Few knew about the quick passage of the star of The Lord of the Rings through Buenos Aires, where, besides seeing San Lorenzo play, he presented the latest titles by Perceval Press, his independent publishing house. 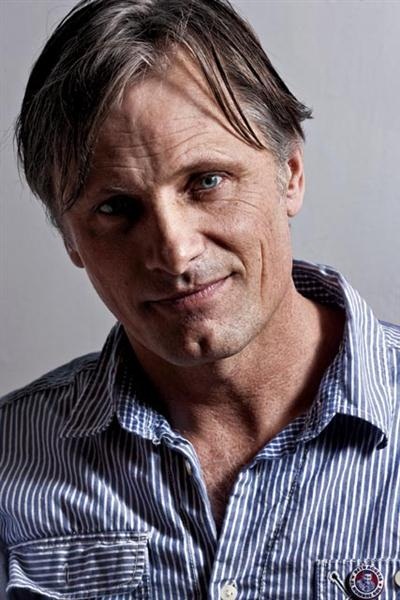 Image Federico Spatz.
© La Nacion.
The appointment this time was in the brand new headquarters of the Centro Cultural de España (CCEBA) in San Telmo. A big, rambling house with spacious gardens and rooms with walls taken over by visual artists. There, several hundred writers, actors, producers and a general audience came, in pouring rain, to listen to the poet-actor who presented his second book of poems. It´s Canciones de Invierno, a CD with the poems read and accompanied on the piano by Mortensen himself, adding to it a small book including, in turn, photographs taken by the same author. Next to him, in the presentation, sat the Argentinian poet Talo Kejner, author of an anthology also edited by Perceval Press. In a dynamic ping-pong reading, constantly tinged with jokes between the two authors, more than two hours went by that the audience praised with long applause.

Viggo Mortensen does not want to speak about his career as an actor. "I came to present my book and to introduce Talo, who is presenting his poetry for the first time publicly, following his long development as a poet." And he's right, the author of the third book published in Spanish by Perceval Press is a great poet and a strange case. Talo Kejner is a civil engineer who was well-known during the seventies, but who was forced into exile in Mexico and Venezuela for eight years. There, according to Mortensen, Kejner found an escape in poetry, and a profession. In an exclusive with LNR, Viggo talks about the experience of being an editor and author.

One can see that you have a very deep friendship with Talo Kejner. How did you meet this solitary poet?

"Camilo Kejner, Talo's son, worked in the public relations team of the production company for The Lord of the Rings. When they found out that we both spoke Spanish, they sent us on a tour through South America.

During the trip, we became very good friends and, knowing about my interest in poetry, he timidly showed me some of his father's poems. They were very good! I asked if he had more. (He bursts out laughing). Eventually, when I got in touch with Talo by mail, he sent me more than a thousand poems - it was insane! He asked me, as the editor, to choose the poems, because he couldn't. It was very difficult, and at the same time, an honor. I truly devoted a lot of time to these books."

Translating the poems of another author is not an easy task either...

"No. It's true. I wanted the book to be bilingual so that his work could be known in the US and in other countries. But for me, it was very important, because it helped me return to the strict grammar of both languages and to my personal double history. Nevertheless, I believe that translating a poem always causes damage; there are times in which one feels that justice is not done to it. Because of this, I'm very careful, because the cleaning up of texts is a crime."

And your relationship with Spanish?

Passionate about art, music and literature since he was little, he looked relaxed and informal during the private showing of his new literary work. It concerns his second book of poetry, intimate and in contemporary style. The poems were written throughout the life of this Hollywood actor who lived in our country as a child. In them, you can read, "We underestimate/damage done to the sky/when we allow words/to slip away/into the clouds." (Poem, The Hillside) or "Oceans take our secrets/what we don't want to see or smell anymore/we feel clear/when we throw our past away" (Poem, Secrets).

How did you get the idea of creating an independent publishing house?

"I've always liked poetry, but in 2002 I could put this project, which has two purposes, into practice. On one hand, to publish poets who are not well known, and on the other, to donate the proceeds from my own books to organizations that need them." (In this case, proceeds will go to the Padre Lorenzo Mazza Chapel. See "The San Lorenzo Chapel," below.)

What are the publishing house´s plans for the future?

"We are working on several projects at the same time. The idea is to publish a new bilingual anthology, in Russian and English, by the poet Ivanoff, and a second anthology of Argentinian poetry, because there are a lot of authors who could not be included in the first book. We will also publish photography and poetry books by American authors and from little-known visual artists from the United States, New Zealand and possibly Cuba, but it´s not totally confirmed yet."

All the proceeds from Viggo Mortensen's new book, Canciones de Invierno, will be donated to the Padre Lorenzo Massa Chapel. The work was financed by the actor and built in the sports complex of the San Lorenzo de Almagro club, under the direction of the architect Oscar Lucchini.