Of Couches And Men

By Catherine Poirier - translated by Celine

Source: Le Nouvel Observateur - TéléObs supplement
In A Dangerous Method, his new film, David Cronenberg evokes the rivalry between Freud and Jung through the affair the latter had with one of his patients. 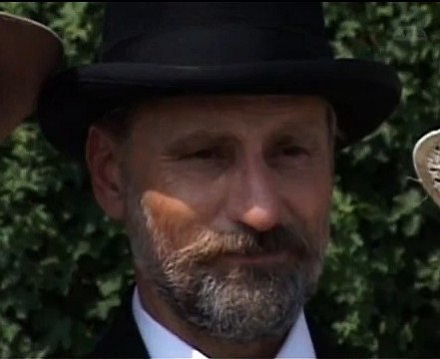 © APA.
Seestrasse, on the shores of Lake Constance, at the German-Swiss frontier. Extras in boater hats, pale linen 3 piece suits, and sporting small impeccably trimmed beards are walking nonchalantly on the arms of young women with umbrellas. A bit further away on stone steps disappearing into the water Peter Suschitzky (cinematographer) is finalising the set up of some very elaborate travelling: the camera is carried by a crane anchored on a dingy boat. In the shade, seated on a high chair, David Cronenberg is observing the scene. A soft torpor seems to be prevailing on the set of his latest film, called A Dangerous Method.

Adapted from Christopher Hampton's play, the film tells the the story of the intellectual rivalry between Freud (Viggo Mortensen) and Jung (Michael Fassbender) that took place during the rise of Nazism. The object of their discord: Sabina Spielrein (Keira Knightley), a patient, Jung's lover and Freud 's student. In 1904, the 20 year old young woman is interned in the hospital where Carl Jung is working. Jung, recently skilled in psychoanalysis and Sigmund Freud's disciple tested his knowledge on her and succeeded in curing her. Once safe from her demons - sexual deviance linked to her childhood - Sabina Spielrein starts studying medicine and psychoanalysis under the psychoanalyst's direction. But Jung breaks one of the fundamental principles in the psychoanalysis doctrine: he falls in love with his patient and becomes her lover. This passionate and violent relationship results in him being disowned by Freud. The irony of the story is that Sabina will become Freud's student and that despite her best effort she will fail to reconcile the men.

The story goes that Cronenberg would have been drawn to Hampton's play because of the distrust he feels towards Jung. Serges Grungberg (the director's biographer) explains: "One day he confided in me that he considered him [Jung] a psychopath. In the scenario the story became both lighter and more ambiguous, the relationship between Carl Jung and Sabina Spielrein is treated rather discreetly even though we know today that it was a totally sadomasochist one. However, we can continuously see Freud on the alert, obsessed by the possible deviance of his former student."

Why not form your own opinion with these lines from the scenario?

Otto Gross (Vincent Cassel) a man with a strong personality and Freud's friend comes to have himself psychoanalysed by Jung. This is a man who lives his desires without any restraints and claims it. His example profoundly disturbs Jung who is torn between his marriage of convenience and his fledgling passion for Sabina. During one of the sessions Jung asks Gross: "Don't you believe in monogamy?" Gross answers: "I can't imagine a more exhausting concept."

The shot is ready. Sabina's stand-in, a very thin young girl with blond hair who has been standing on the steps for two hours can now step aside. Keira Knightley in a long white linen skirt and semi see-through blouse, her hair in a bun and a straw hat in her hands steps forward with determination. She goes down the steps and stares at the horizon, while from the centre of the lake the camera is slowly moving towards her. Keira Knightley's delicate and slender figure stands out against the steel blue sky. The camera is shaking slightly and the steadycam must be stabilized again. Pause. The props person with a couple of silver knobbed canes in his hand comes and inspects the extras' walk. Between two adjustments, the cinematographer Peter Suschitzky, who has been working with David Cronenberg for more than 20 years, tells us: "It was a challenge to make a story completely based on dialogue into a film. David is very precise. There are no more than two takes per shot. By the way, we are two days ahead of schedule."

In the director's chair, his sister, Denise Cronenberg looks strikingly like him. A costume designer on her brother's films for 30 years, she explains the difficulties she has had to overcome on this one. "There are only few photographs of Sabina. Therefore I had the leisure of making her from scratch. At that time the stress was put on elegance. The bourgeois was very corseted, literally and figuratively speaking. Men never took off their jackets nor did they unbutton their waistcoats. If you look at archive documents even patients in a psychatric asylum were wearing 3 piece suits." Stephan Dupuis, a David Cronenberg collaborator since 1977 and head of the make-up department on this film, has had a fight on his hands to make Viggo Mortensen more credible for his role as Freud: "I had to fit him with a prosthetic nose and give him brown contact lenses. Viggo has such intense blue eyes that it wasn't working at all!" The actor has saved the film, so to speak. Indeed, Christoph Waltz, who won "the Cannes Prix D'Interpretation Masculine" for his role in Quentin Tarantino's film Inglourious Basterds was initially supposed to play the role. After pocketing his prize from Cannes, the Austrian actor pulled out of this project, prefering to give into "the bright lights of Hollywood". Jeremy Thomas, the British producer, admits: "It was a hard blow", especially as he was about to finalise the financing of the film, notably with German funding: "With Christoph Waltz gone some of the partners were threatening to pull out."

After several takes of Keira Knightley stoically facing the horizon, a dashing Michael Fassbender arrives on set, with his little steel rimmed glasses and his hat tight on his head. A dingy boat takes him towards a red sailboat that is anchored in the middle of the lake. Hidden in the hull a man skillfully manoeuvers the boat while the actor pretends to direct it towards the steps where Keira is standing. "This must be a very frustrating role for Fassbender. Carl Jung is such a repressed being," slips Peter Suschitzky. This is a man whose fights with Freud throws him into a state of severe depression. Founders of the two most important schools of psychoanalysis at the start of the 20th century, Freud and Jung nurtured between each other a relationship in turn filial then more and more hostile. And it was only in the 1970s when Sabina Spielrein's letters and diaries were published that we understood at last the true nature of their differences and the impact these were going to have on the methods developed by Jung. Because, according to the British philosopher Anthony C. Grayling, the relationship between Sabina Spielrein and Carl Jung was not only emotional but also intellectual. "She certainly influenced the direction of Jung 's research," he says. "She suggested to him the concept of anima and helped him in his work of word association. If Jung ended their affair it was for fear of being discovered, and it was only after their separation that Sabina went to study with Freud in Vienna." For six years, Freud considered Jung as his heir. The young Swiss, of Protestant denomination, accompanied him to the U.S. for a series of international conferences on psychoanalysis and helped to spread his theories outside Vienna. After that the Austrian decided to "break off" with him. "Freud speaks of him as a repressed and brutal anti-Semitic, and emotionally stupid. He didn't have words harsh enough for the man he had adopted as his spiritual son," Anthony C. Grayling explains.

In 1913, Carl Jung and Sabina Spielrein saw each other one last time. Pregnant and married to a Russian doctor Sabina returned to Russia and set up practice as a child psychologist. Jung was in a deep depression, still torn between his wife and a new mistress. He lived through the two wars without incident, whereas Sabina Spielrein, whose husband died in Stalin's gulags, was shot together with her two daughters by the Nazis in 1941.

On Lake Constance the handsome Fassbender on his red sailboat nears the shore. The camera focuses on his eyes filled with melancholy. Sabina, she has disappeared. Never trust a calm lake.
Top of this page
Last edited: 16 November 2010 16:32:25