Everything He Touches Is Poetry

By Maricel Chavarria - translated by Ollie, Rio and Zoe 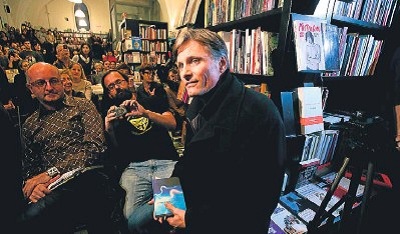 Promotion and reading of The Anthology of New …
Image Javier Gomez.
© La Vanguardia.
To have and continue having the luck of ending up with Perceval Press, that is the question. In the publishing house of the actor, poet, musician, painter, photographer... the sun never sets on Viggo Mortensen. And not because of the volume of business, which is actually small, but because of the guy's capacity for dissemination and his ability to attract people's attention. Not in its wildest dreams could the Central del Raval have imagined that the presentation of an anthology of new Argentinian poetry would attract such a crowd in Barcelona. Between the jam-packed displays of books in the mezzanine of the bookstore, two hundred people gathered yesterday: Argentines, of course; lovers of poetry in particular and literature in general, and loving fans of the protagonist of Eastern Promises, who in his colloquial Argentinian accent made them all forget - not entirely successfully - the cop embedded in the Russian mafia who unsettled so many souls.

So Viggo came back to Barcelona - and to Spain in general - after his parents overcame a health crisis that kept him away from his friends in the Peninsula and Ariel Dorfman´s Purgatorio, that along with Ariadna Gil and then Emma Suárez, he had expected to perform in Madrid. And he did it opening the way for Argentinian poets who are attracting attention. Washington Cucurto or Fabián Casas, to name two prominent ones, but also Gabriela Bejerman or Fernanda Laguna. And so up to 22 representatives of a poetry that "began coming on after the fall of the dictatorship, when hidden poets, exiled or censored, emerged and came to bloom in the mid-eighties", says Gustavo López, the editor of this anthology.

Poetry of the experience predicted by the corralito and freed from the prosodic speech of daily life. [Translator's note: for "corralito," see:en.wikipedia.org/wiki/Corralito]

Everything began when Kevin Power, the art critic, found the recipe Gustavo López needed: "I've got someone who can value that poetry and the Argentinian character," he commented to him. "He phoned me, Viggo," explains López "and we talked about poetry for a while, about Williams Carlos Williams, about T.S. Eliot... about the anthology I was proposing... He was a guy with a background. But it didn´t come to me who he was till later on."

The guy with background, for whom long trips by airplane and train were invitations to read poetry - "and if I´m driving, I listen to it being recited on a CD," says the protagonist of The Road - had trouble yesterday getting the print press to give him a break and let the poetry take center stage. With the crowd quieted down, he opened fire with Fabián Casas' "Without Keys and In the Dark", and dedicated it to the late "Néstor Kirchner, who did something good." A man is locked out of his house while taking out the trash: "It's temporary, I told myself;/ but death could also be like this:/ a dark passageway,/ a door closed with the key inside/ the trash in your hand."

If Rilke said that childhood is our homeland, Mortensen's - from two to eleven - was spent in Argentina. There he wrote "my first silly tales," he told this paper. With an American mother and Danish father, he used Spanish as well as English. But his own publishing house with headquarters in Santa Monica is multifaceted: photography, essay, painting...

Catapulted [to fame] as Aragorn in The Lord of the Rings, Mortensen interrupts his reading and reflects on the ingenious thing that violence can be: He reports that a supporter of an opposing team yelled at him, "Fucking actor, go on, put on the ring and disappear," when he didn't want to remove his San Lorenzo jersey. That guy, Mortensen, still cracks up laughing.