Source: Table magazine (Australia)
Except for an alleged off-screen romance with Gwyneth Paltrow, Viggo Mortensen has retained a certain anonymity despite have 30 or more movies to his credit. However, with the release of A Walk on the Moon, all that is about to change. 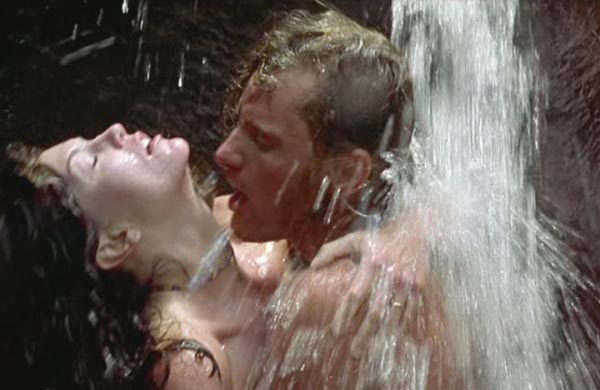 © Miramax Films/Village Roadshow.
At times it seems when Viggo Mortensen isn't beating up movie stars like Demi Moore in GI Jane, he's making love to them. He pursued Nicole Kidman in The Portrait of a Lady, became Gwyneth Paltrow's 'other man' in A Perfect Murder, and now, in his bittersweet romantic comedy, A Walk on the Moon, Diane Lane, married mother of two, can't keep her hands off him.

Although the ruggedly handsome 40-year-old actor has appeared in dozens of movies (betraying Denzel Washington in Crimson Tide, and waxing satanic in The Prophecy), Viggo has somehow managed to retain his anonymity, but with the critical success of his latest movie, those days may be gone forever.

The self-deprecating actor is amused at the hype. "I gave up a long time ago taking anything for granted in this business," he says, "and I don't know if I'll ever get to 'Easy Street'." He leans forward. "I've been told ever since I started testing for movies that I'd 'arrived'. People would slap me on the back, saying, 'You're the man, you've made it.' And the thing is, I do consider myself lucky to have worked steadily for the past 10 years, but I've arrived so many times, I don't know where I went."

After ordering a cup of green tea from room service in his plush New York hotel room, he continues, "I still can't get used to the fact that anybody would care about anything I had to say, and it's only as a result of being in this movie that I'd be sitting here doing this interview."

Although his professional life seems to have run semi-smoothly, personally he's had his share of bumps in the road. In 1987, while working on the low-budget film Salvation, he met punk rocker and poet Exene Cervenka, formerly of the band X, and now of Auntie Christ. The couple married, had a son, and divorced soon after.

"Henry is 11 years old now," he smiles. "And being a dad has really kept me out of trouble and made me focus on the important things in life, which is, of course, my son. I'm still passionate about my work, but it took the onus off movies as being the be-all and end-all," he says. "Henry definitely gave me some perspective."

Viggo maintains an amicable relationship with his former wife and the three recently went on holiday together.

So low-key is Viggo that the rumours of his off-screen affair with Gwyneth Paltrow (during the making of A Perfect Murder), and the subsequent accusation that this so-called tryst broke up Ben Affleck and the Oscar-winning actress, left him stunned.

"At first, it was funny because the stories were so absurd. My cousins in Denmark were happy for me. They said Gwyneth was such a snappy dresser and had so much style that maybe it would rub off on me," he quips. "But the worst part was I got some pretty mean hate mail."

He fires up a cigarette. "I've gotta say, I've never had so much press in my entire career."

The first thing you notice about Viggo, other than his impossibly chiselled cheekbones and soulful eyes, is his laid back demeanour. "I'm not an 'Everybody listen up' kind of guy," he says. "I kind of like to be in the background, but I'm happiest when I'm in a changing environment. I find it hard to sit still."

The oldest of three boys, Viggo's restless spirit developed as a child due to the family's constant travelling between America (where he was born), Argentina and Venezuela (where he spent several years), and his father's native country, Denmark. As a result, Viggo is fluent in Spanish and Danish.

A prolific painter whose work was used in A Perfect Murder (in which he played Gwyneth's artist lover), Viggo has regular exhibits and conducts poetry readings (his published book is entitled Ten Last Night) at Venice Beach's struggling poetry centre Beyond Baroque. He has also released two poetry/jazz CDs, Don't Tell Me What To Do and One Less Thing To Worry About, on which ex-wife Exene also appears.

Like most actors, Viggo has had his share of odd jobs. "I've been a bartender, furniture remover, waiter, forklift driver," he says. "And it's definitely helped me as an actor. Like anything, you can learn something about the world or about people, or you can learn very little, depending on how open you are to it."

The actor, once described by Michael Douglas as 'a method actor caught in a leading man's looks,' feels comfortable playing morally ambiguous characters. He received wide critical acclaim as the tattooed trouble incarnate in The Indian Runner opposite Sean Penn [sic], and as the mysterious brother of Alexander Godunov in 1985's Witness.

He muses, "No matter how evil and strange the characters have been I've never played someone I didn't like. I think that's partly a result of being exposed to lots of different kinds of people while growing up."

A Walk on the Moon is set in 1969, a pivotal time in American life. The Apollo 11 mission and Woodstock occurred while the Vietnam War raged on, dividing the moral fibre of the country.

This conservative Jewish family is turned upside down when Pearl meets a sexy, free-spirited travelling salesman who represents freedom and with whom she finds sexual ecstasy, relieving her bored, trapped existence. The movie has a lot to say about the colliding worlds of 'love-ins' and bar mitzvahs, but will probably be best remembered for a certain love scene between Mortensen and Lane in front of a Woodstock waterfall.

When he was 11 years old, his family split up and Viggo, his brothers and mother returned to the United States. "When I got back to America, it was when the astronauts had returned (I'd seen them land on the moon in Argentina), and it was a major culture shock for me. There was Mad magazine, Easy Rider, the Manson killings, and army guys smoking pot," he says, shaking his head. "It was really something."

He continues to balance a full career, dividing his time among acting, painting and making music. "I think the connection between acting and painting is evident. As an actor, the only control you have is to say no to a project. As a painter, you have control of your own work."

But what he doesn't have control over is his image, and his dubious status as Hollywood's 'official clandestine lover'. He laughs. "Actors who say that doing sex scenes is an unpleasant thing, that's bullshit," he says.

"It's obviously a bit weird with the crew around, but it's not as bad as people make out. When I did A Perfect Murder, I wanted to make sure that Gwyneth was comfortable because I don't think she had done many love scenes, so I sang an old tango song in Spanish to her."

He lights another cigarette.

"I've certainly worked with some interesting actresses, and if part of the story is that I become intimate with them on screen, then that's just a coincidence," he explains, referring to his lusty image.