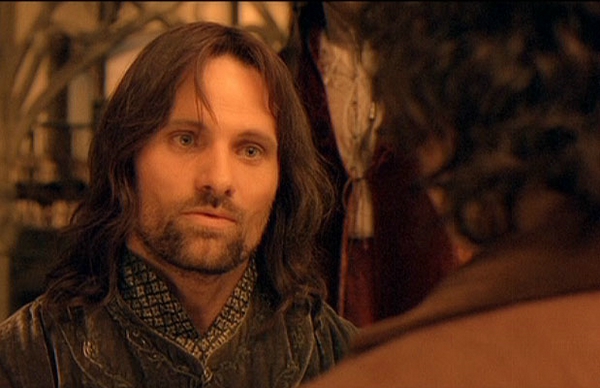 © New Line Productions Inc.
What Russell Crowe did for togas, Viggo Mortensen may well do for chain mail. In director Peter Jackson's The Fellowship of the Ring, Mortensen plays Aragorn, a reluctant hero with a vicious sword and whispery voice. Though Aragorn says little ("He's just happy to be anonymous," says the 43-year-old actor. "He has a lot of self-doubt and secrets."), Mortensen connects: His is the genuinely human face among Tolkien's many hobbits, elves, and wizards. "You look at [Viggo] on camera and think, Who else could be Aragorn?" says producer Mark Ordesky. "Who else could be the brooding man of action - dark and edgy but with a soul?"

Not many actors could steal scenes in near silence, but Mortensen has quietly burnished the technique over the past decade. Time and again, he's busted through cramped roles as outright bad guy (the tormentor of SEAL trainee Demi Moore in G.I. Jane), might-be bad guy (the betraying paramour of Gwyneth Paltrow in A Perfect Murder), and stormy good guy (the fellow rehabber who helps Sandra Bullock through 28 Days). In short, Mortensen's smoldering inscrutability gives Ring as much edge as its mass of CGI monsters. It also lends him a cool machismo while speaking Elvish - some of his favorite dialogue.

"That's as close as you get to pure Tolkien," he says. "It's like having his hand on your shoulder."

While audiences await the next Lord of the Rings instalment, the single dad is preparing for another breakthrough. A photographer and painter (that was his work in A Perfect Murder), he opens his latest show at L.A.'s Track 16 Gallery in February. "[Painting] is something where I can look at the end product and - whether I like it or you like it - I can say that's something I did. That came out of me. That's not true of movies." But Mortensen isn't dreading his Rings reception.

"The experience of having done it was worth it," he says. "If you're that long in New Zealand, with that group of people, telling this story, and haven't learned something or gotten some joy out of it, you've wasted your time. "
Top of this page
Last edited: 3 October 2010 09:24:25