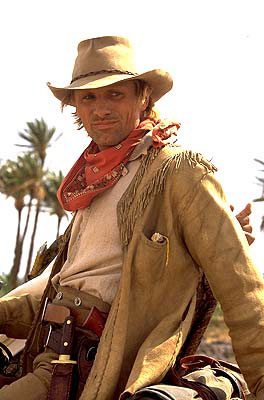 © Touchstone / Buena Vista Pictures.
When you hire Viggo Mortensen for your movie, you're not just getting a star, you're getting a professional.

According to Hidalgo director Joe Johnston, Mortensen not only shows up on time and knows his lines, but he gives a little extra something to make the job easier.

"He's really a technical actor," Johnston says during a recent San Francisco visit. "He knows the camera. He'll start to get blocked and he'll move over to clear the camera. And he's staying in character the whole time. He can feel the light; he knows how to put himself in the light. The DP just loved it. And the editor loves him because he matches. He knows how long his cigarette was and what the line was and what line he was saying when he put it out. A lot of actors, not only can't do this, but they don't care."

Johnston also praises Mortensen's talent, comparing him to a young Brando or Montgomery Clift. One day Johnston was filming Mortensen from a distance. It looked as if the actor was doing nothing. But during the dailies, on a big screen, "he was doing all kinds of stuff. He's doing all these subtle things that you can't see. And he knew, because he knew what the lens was. And what the camera was seeing."

Apparently Mortensen, 45, is good at everything in the movie business, including the hotel room interview. Late in the afternoon as the elusive San Francisco sun made a guest appearance, he suggested that we go out on the balcony. Since his room had no direct access to the balcony, it was necessary to squeeze out the narrow window, and so we did.

Sitting on the concrete and feeling the cool wind on our faces, Mortensen cradled his odd little cup of tea, a stone bowl with horse and snake etchings on the sides and a steel straw with a filter inside. "It's called mate (MAH-tay)," he tells me. He wears a dark green cardigan with a NAALA 2002 t-shirt underneath, jeans, black socks and no shoes. His hair, worn long during both The Lord of the Rings and [i/Hidalgo[/i], is now short and stylishly rumpled.

Like some of Johnston's earlier films, such as The Rocketeer and October Sky, Hidalgo is reminiscent of an earlier age when adventure films were less in-your-face and more, well, adventurous. The new film focuses on crisp storytelling and careful pacing, allowing the audience to enter into the fun rather than hammering them over the head with it.

"It's rare that a studio does that anymore," he says. "Because so much money's at stake, they want to get their money back and make sure that every 't' is crossed and every 'i' is dotted. It's just marketing. But this movie doesn't do that. It harkens back to that old good style, whether it's Howard Hawks or Bill Wellman or John Ford. I think of Howard Hawks a lot when I see Joe. It's just about the job of telling a story."

He begins to talk about T.J. the horse that played Hidalgo in the new film. Mortensen plays the real life Frank T. Hopkins, a down-and-out American cowboy with Indian blood who enters a race in the Middle East, riding his wild mustang Hidalgo against Arabian stallions. Apparently, Mortensen and T.J. formed such a bond during filming that the actor purchased the horse after wrapping.

"Most of it has to do with the lucky casting of T.J.," Mortensen says. "On his own, he just came up with one reaction after another that was totally appropriate; whether it was jealousy, or possessiveness, or annoyance, or nagging me, or guilting me."

Mortensen rode two horses in The Lord of the Rings, the second of which was a huge stallion with a difficult personality. "With T.J. anybody can go up and pet him or be around him and it's like, 'whatever.' I think of Andy Capp a lot when I look at him. You know that comic strip, the guy who's got the pint and the cap and the cigarette in his mouth? That's T.J."

"The more you ride, the better off you are," he says. "In preparation for this movie, when one wasn't available I would ride a different horse on purpose. I even rode some of the Arabian horses. It's like driving lots of different cars and bicycles. You'll just be more comfortable and flexible and able to react and deal with things."

Mortensen was also aware that his horsemanship would allow the director more options in shooting his scenes. He could use close-ups or long shots without having to cheat using stuntmen or dutch angles. It's just one more way the professional tries to be helpful.

"Sidney Lumet said something that was pretty valuable," he says. "The work consists largely of making the best possible preparations for accidents to happen. I never quit trying to figure out new stuff and trying to add stuff, until it's taken away from you to be edited."
Top of this page
Last edited: 18 July 2010 13:45:42
© Combustible Celluloid.