By Chris Stein - translated by Chrissiejane

Source: Grazia (France)
At the age of 51 he has the look and the attitude of a teenager who, without a word, takes off down the road with his backpack. Whilst he was doing promotion in Toronto, Grazia fell under the spell of Viggo the hero. 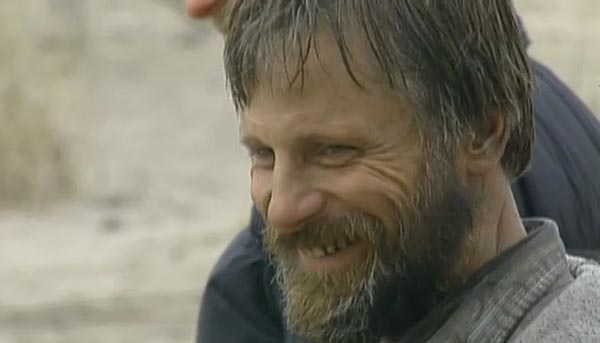 © 2929/Dimension Films.
Removing his shoes to respond to interviews....a specialty of this 50-ish actor who will only agree to trade his jeans and western shirt for a dinner jacket under duress (Oscars, Cannes, photo session for a stylish magazine....). So it's in his socks that the famous Aragorn of Lord of the Rings receives us in the Toronto hotel suite. Will he tell us, as he does after each job, that he's giving up cinema to devote himself completely to painting, sculpture, writing and photography? No! And even when he finally does that, no-one will believe him! Viggo can play the tortured artist well, but he always returns to the place where we love to find him: in front of the camera. In the flesh the actor seems slighter and smaller than the heroes he brings to life on the screen. But the small scar above his lip is always intriguing, the gaze of his blue eyes as guarded as is necessary, and his hair willfully messy. In effect, all his efforts to enact the anti-star make him into a mega-star...

You are very thin! Did you follow a diet for the movie?

Yes. In The Road my role is that of a man who, after the apocalypse, tries to save his own and his son's skin. I was obviously required to lose a lot of weight.

Poetry, photography, music, sculpture: you're not afraid that people would say about you that your work is admired because you are a movie star?

It's a risk, but I don't care whether people admire my work or not! I do it to please myself. Art for me is a release mechanism. I need to paint, write, compose. I set up a publishing house (Perceval Press) to publish my collections of poems and photographs. It's a very small company, I don't want to make a big business out of it. It would still be fantastic if we balanced the books some day. The success of the Lord of the Rings trilogy changed the deal a little. Before then, when I put on a poetry reading, there would just be a circle of my friends around me. Now there are hundreds of inquisitive strangers. If fame can make an under-appreciated art better known, it's perfect!

Is there an artistic field in which you feel you are no good?

Certainly there will be...I don't seek to be perfect. My philosophy is to increase my experiences throughout my life. There are indeed things which don't instinctively engage me but I make myself try them before passing judgment.

Do you consider yourself to be intellectual?

Intellectual, no. Citizen of the World, yes! Movies have brought me the opportunity to travel a lot, to my benefit. But I am also a responsible father. I spend a lot of time at home in Venice and my rare outings are made with my son (who is 21 - Ed).

You have said that your son has been your best friend..,what do you share with him?

We love to go camping together.

Any regrets? In his upbringing, for example?

None. Every day spent with him has brought its share of joys and adventures. It serves no purpose to think over the past.

Did you think about your son whilst preparing to film The Road?

Yes, the character of my son in the movie made me think a lot about my real son. Henry, pre-adolescent. He was wiser and more clever than the other kids of his age. But that wasn't always to my liking, I used to say that he could have done with being a little more carefree, but I accepted it in the end....like my character in the movie.

How did you prepare for this movie?

I talked to lots of homeless people because the characters in The Road lead the same kind of life as them.I have always been interested by the lot of people with no home. They all had the same story of their fall into hell after the loss of a job or a break up with a loved one. The ones living that way from choice were few. Their day consisted of finding food, a place to sleep and protecting themselves from attack.

It's hard to imagine you partying with friends, does that happen?

Yes, sometimes! Mostly at ice hockey matches. I love that sport. And then 2010 will be a great year for me because of the Football World Cup. When I can't be at a game, I like to meet pals in a bar and watch the replays with them.

When you really need to relax, what do you do? And don't say "read a good book by the fire"!

I like to go horse riding in the Hollywood hills at twilight. I spent many months with horses during the filming of Lord of the Rings and Hidalgo. it's wonderful!

On the contrary! Each time I have tried to charm them with my poetic cowboy side, it's ended in total failure.To seduce a woman, food is more effective than poetry. I love to make complex dishes. That always works!

After so many years as an actor, what is there about Hollywood you find totally intolerable?

Liars and big-heads. I have never sought to have a Hollywood career. These past few years I have had the chance to work in some sublime movies, like The Road. But it wasn't always so. In fact, my bank account can get close to the red well before the perfect script drops onto my desk. Sometimes that obliges me to take a film to pay the bills. I'm a poet, an artist, but also a pragmatist!

It seems that you have no personal assistant. How do you manage everything?

I do not manage anything, that's my secret! (Laughs.) If someone wants to offer me work they know how to get me. The rest of the time I prefer to disappear. Hollywood is not my reality.

Would getting an Oscar please you?

Personally, having an Oscar is not an end in itself. But for a movie it's an enormous help.

It is said that all Americans - and above all others actors - are big kids. What are your child-like qualities?

You represent a masculine stereotype: the untamed man of the wide open spaces, what do you think of that?

That is just Hollywood propaganda to sell my movies. (Laughs.)