Identity And Process: An Interview With Viggo Mortensen 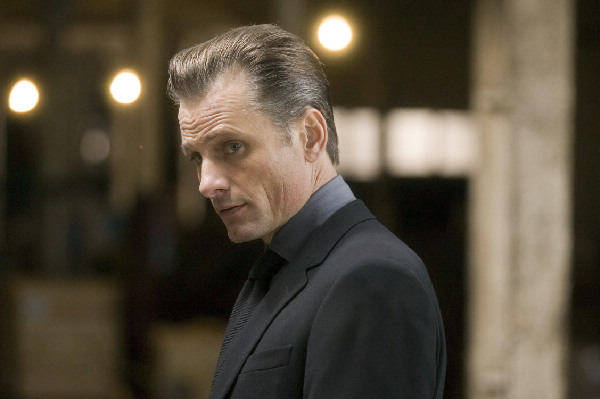 © Focus Features.
Eastern Promises, the story of a midwife (Naomi Watts) who finds herself involved with a Russian crime family after an unidentified woman dies in childbirth and leaves behind her newborn without a home, is now available on DVD . Viggo Mortensen, who portrays Nikolai in the film, a Russian driver who is moving his way up through the ranks, held a press conference to talk about the film, reuniting with David Cronenberg (whom he also worked with on 2005's A History of Violence), his process and that revealing fight in the steam room.

You have done two movies now with David Cronenberg that both deal with organized crime and identity issues, yet they could not be anymore different. Did you ever feel there was a danger of repeating yourselves?

Well, not really. I mean, one thing I like about Cronenberg as a director is that he doesn't reference other people's work and other directors' movies. He doesn't even reference himself, really. Obviously it's the same guy directing both History of Violence and Eastern Promises, so there are going to be signature traits in common. But I think that what makes him get better and better as a director and why he's such an original voice is that he doesn't work from a conceptual point of view. He doesn't think, 'I have to copy or avoid copying anything I've done before.' He tells a story on its own terms every time and I like to do the same as an actor.

I mean, there's sort of a deconstruction of our idea of family or of nuclear family in both movies. There's an identity issue. But any good piece of work from an actor or director where there's a story that involves people, people are complicated. All people are complicated and they're different everyday. Everyday when we wake up we sort of put together our personalities. We deal with different people we encounter in the course of a day in different ways. We present ourselves in different ways. So that's not freakish or unusual.

I would say that the two characters, from my point of view, the one I played in History of Violence and the one I play in Eastern Promises, I guess one difference you could say is that in Eastern Promises my character is quite clear on who he is and what he is attempting to do - what he is sacrificing, what's at stake. He's not lying to himself in any way, really, whereas the other character is necessarily - or he feels it's necessary in History of Violence - deluding himself on some level. And I don't think that's the case in this story.

What attracts you to these morally ambiguous characters?

I think all people are morally ambiguous. With any character, the idea is to get to know and be that person. It's kind of ridiculous because it's impossible to fully know someone that you're not, just like it's impossible for us to fully know yourself. I always ask myself, "If he's described as this bad, bad person, why is he bad?"

I think people are endlessly interesting no matter what you're playing as an actor. I don't look for someone who is morally ambiguous; I think that all people are contradictory in their behavior and in their personality.

One of the things that I was struck by with Nikolai were some of his physical characteristics: the very straight posture, the slicked back hair. Were these details that you came up with or did you collaborate with Cronenberg?

It was definitely a collaboration. I enjoy the teamwork of movies, and movies where teamwork isn't encouraged are movies that don't usually turn out that well - they're not enjoyable shoots.

I found some information about the history of Russian criminal tattoos, and I brought those to the attention of David and that became incorporated. And then Denise Cronenberg (Eastern Promises' costume designer) came up with the clothes and we fine-tuned and picked particular shoes and suits.

Are there any directors you are dying to work with?

There's not very many. But if there was someone who has passed away, I would say Carl Dreyer: a great Danish director, directed movies like The Passion of Joan of Arc, Gertrud and Day of Wrath.

So what is it about Cronenberg that is so different?

He never loses his sense of play. He takes his work extremely seriously yet does not take himself at all seriously; he's not heavy-handed as an artist or as a person. He's able to create a very relaxed, productive atmosphere on-set. And [he] has the same crew from movie to movie because they really enjoy working with him.

I don't think it's an accident that actors generally do their best work, or close to it, [when working with him] because he welcomes your suggestions.

That steam room fight, was that tough to do?

It was somewhat painful, but I knew that would be the case. For obvious reasons, there's no pads. It's just in-your-face work of nature and survival. And I thought on an emotional level, on a physical level, on a visual level, it was good. It was satisfying.

It's certainly not gratuitous because at the end of it, if the character can survive, you know that everything's changed.

Did you have to train especially hard for this film?

I went to Russia and found some military manuals on the training of hand-to-hand combat - defending yourself against someone with a knife, or turning the knife against them. Fortunately, the two guys in that fight, one of them had been in the Russian military, so he understood [the techniques] and he was helpful. Then the other guy was a boxer, so they were both really good athletes and very capable.

At the end of the film, when Nikolai is sitting in the restaurant, what was going through his mind?

Well, that's one sign that it was a good story. Most movies, you don't walk away with as many questions. With Eastern Promises, each time you see it, you see more and you have more questions.

And I'm not going to [say] what he was thinking. I know what he was thinking, but it's good that [viewers] wonder. One feeling you get from it is beware of what you wish for, because now what? At the end of the story, you feel that it will continue. And if you're particularly impatient, you might feel it's incomplete. Life is never complete.

Do you ever see yourself going back to a character like Nikolai?

You could easily carry on, not that you have to. If [Cronenberg] came up with a really good story idea, why the hell not? It might be interesting.

Finally, have you gotten any critiques from Russian mobsters?

Not mobsters, but from Russian journalists. Several have complimented us on going to great lengths to try to be accurate in some ways about behavior and, in some cases, about language because they're accustomed to seeing [Hollywood] do a really bad job and just seeing Europeans who are not Russians making movies or playing characters who are Russians. I think it's on a par with the way it used to be as far as the depictions of Native Americans or Spanish-speaking characters in the '40s, '50s, '60s, '70s, '80s and still once in awhile, but not so much anymore - that you could do a terrible job with the language and the ethnic aspects of Native Americans and Hispanics, for example, and nobody would care. But then once you see it done right a couple of times or better, then there's a higher standard required. And I think that's going to happen with Russians when they're portrayed in movies. I mean, it is the biggest country in the world.

The journalists have told us that they were pleasantly surprised to see us go to an effort where other people maybe hadn't - people who should have known better and just didn't even really try very hard. So I think that maybe we helped to set the bar a little higher as far as how Russians are depicted. [At least] I hope so.
Top of this page
Last edited: 14 July 2010 15:45:57