The Habit Of Giving It All

By Juan Manuel Dominguez - translated by Ollie, Sage and Zooey

Source: Perfil
Between quotes from Cortazar and before the opening of The Road, the actor speaks of the physical challenges, accuses the distributors of being pirates and gives us a heads up about his wish to work in Argentina. 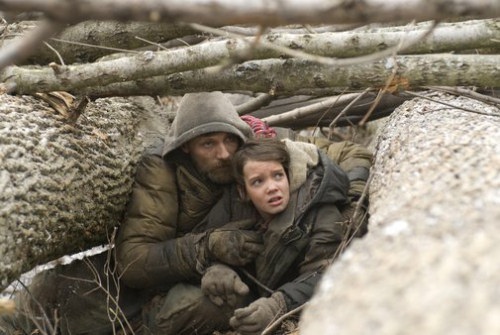 Image Macall Polay.
© 2929/Dimension Films.
The Argentinian. The cuervo. The Lord of the Rings. The one who teaches people to drink mate on million dollar sets. The incredible Viggo Mortensen has many names and many shapes: he can be "the King" of the biggest epic ever seen in the history of cinema (The Lord of the Rings), he can be pure strength and violence under the command of David Cronenberg, he can be the editor and writer of his own publishing house Perceval Press (where, thanks to his friend Fabián Casas, he published an anthology of Argentinian poetry). Today, at least in The Road, he has no name: he is only a father travelling with his son and surviving in a devastated world, in a future in ruins based on Cormac McCarthy´s book (the writer of No Country For Old Men, also taken to the screen.) He and a child. Nothing else. Well, but he, in his very personal Argentinian Spanish, who is able to quote Cortazar to speak of The Road ("Nothing is lost if you have the courage to proclaim everything is lost and that you have to start again"), a film that will open in this country on Thursday, or to put the San Lorenzo jersey on Cate Blanchett´s belly, defends what he believes in with his widely spaced teeth, his classic demeanour, with his extreme way of making a film and caring about it. As if he were a king.

The Road tells the story of the day-by-day life of a father and son in a devastated world and does it in a hyper-realistic way. Is it true that you lived with the homeless and that you worked a lot on your body for the role?

Actually, yes, it was a physical challenge as much for me as for the boy. It would have been strange for us to have the appearance of well-fed people in a movie in such a world. Cold, rain, snow, forest, carrying the child piggyback, more than a physical challenge, on an emotional level it was a mental one. Sometimes I got derailed. I would go into a sort of trance. It has a lot to do with the original book by Cormac McCarthy, rather direct, while at the same time poetic, combining the short phrases of Hemingway but, to me, with more of a poet's soul.

There´s something very physical in the movie: everything was filmed on location, which is surprising considering they are images of a dying world.

From the word go we knew it was complicated: I had to create a subtle but desperate character, knowing there were going to be very hard moments and, on top of that, in the midst of Pennsylvania's winter and destroyed neighbourhoods in New Orleans (that spectral thing, of ruins, of dead people ,are not special effects: it's the truth.) The landscapes are real; that's why one has to be equal to them. In fact, the landscape helped us: it affected you, you couldn't do that role halfway.

It shows that you have an unusual commitment to your work, risking yourself a hundred per cent. How do you choose your roles?

You have to be lucky: good things have to come your way and you have to be able to recognize them. There are people who only want to earn money and be famous; I don't. You have to be ready to make good use of luck. I worked many years before The Lord Of the Rings, but only after that film did many doors open for me.

In fact you gave this film a lot of support due to the problems it had being screened in the United States.

I'm very glad it is coming to the theatres. The truth is that the American distributors, the Weinstein brothers, and excuse me since there is no other way to say it, they completely fucked it up. They used the money intended to promote the film for something else, on films that compared to The Road are artistically inferior. I comment on it because the North American market carries a lot of weight when it comes to seeing a film abroad. We disappeared there. After all, it doesn't matter, because the film is not there. And it matters to me that it is. In spite of the dreadful way those pirates launched it, the film is going to last longer than they will.

Viggo maintains that we are among friends when questioned about his future:

"I am going to make a film in Argentina in the coming year," he assures us.

But, like the Renaissance man only he can be, he tells us of more plans: "Speaking with Fabián (Casas) was a new education for me. This year I will publish a bilingual book of mine, of poetry. I am going to present it in your country next October. And a series of books more centered on the anthropological are coming," he reveals, previewing what comes next in his life.

Viggo Mortensen feels a special affection for our country, feelings that he expresses explicitly each time he visits us. And above all for soccer, as he is a fan of San Lorenzo. Still and all, he balks at referring to Argentina nowadays. "Generalizing is complicated. There are messes everywhere, in the United States, too. Besides, I can't be objective because I was raised here and have affection for this place. And you know ignorance is the norm for any empire," he maintains. So, bar talk, but pretty accurate, capable of saying [the idiom] "loco de guerra" in place of "loco de la guerra," [the more accurate version of the idiom], Viggo comes across, rather than Argentinian or whatever, as a sincere, honest guy committed to everything he does.

And then he affirms that he never has plans and prefers to be attentive to each day: