Viggo Mortensen: "It's always better to be the good guy" 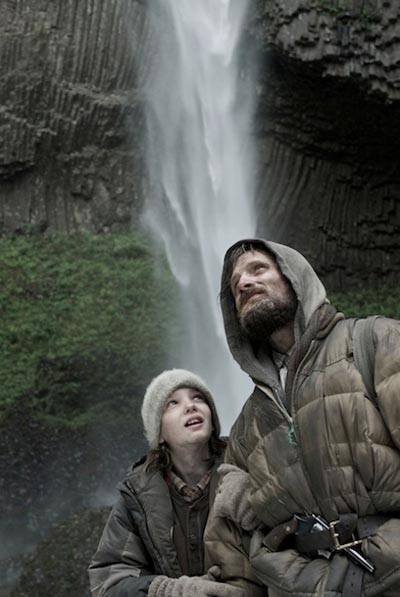 Image Macall Polay.
© 2929/Dimension Films.
Viggo Mortensen wondered if The Road, based on the Pulitzer Prize-winning novel by Cormac McCarthy, would ever make it to theaters. The powerful saga of a father and son searching for sanctuary in a dangerous post-apocalyptic world was completed more than a year ago.

Now, after endless delays, audiences will finally get a chance to catch Mortensen's riveting performance opposite a young new-comer to watch, Aussie Kodi Smit-McPhee. Parade.com's Jeanne Wolf found out why Mortensen almost said no to the role.

He just wanted a vacation.

"I was just tired. I'd been going from one film to another and I didn't want to do something if I wasn't going to be able to give one hundred per cent. But, then I realized that the fact that I was really exhausted was appropriate for the character. This guy is at the end of his rope. He's dying of tiredness. All that keeps him going is trying to keep himself and his son alive."

A lesson for parents.

"The son becomes the teacher, which is something I think a lot of parents can relate to. At a certain point your kid starts saying, 'You tell me I should do this and do that. Why don't you follow some of your own advice?'"

The challenge of being a dad.

"You worry about your child's future. You're like, 'What if I'm away from my infant son or daughter for a few hours, do I trust someone else to take care of them?' Then, later in life, you're more concerned about whether you'll be around anymore to help your children when they're out of the nest. This movie just takes all those concerns to an extreme."

"My son Henry is multi-talented. He writes poetry and music, he's a musician and has done some acting. He's also into archaeology. I think you could say he's well-rounded."

"It was cold, wet, and dirty. But the physical part was actually easy. The challenge was getting inside yourself -- just being honest about how afraid you are, how sad you are, and the determination comes from dealing with your own fear. In the end, I had to kind of throw away all the actor stuff because it was about being honest. What are the things that really scare me, what are the things that make me really sad? What is the thing that I'm most terrified of? I had to go to those places to make it real."

Living The Road for real.

"Every city has people who live on the street, and basically their situation was what ours was in the movie. They have very simple survival concerns like, 'Where am I going to find some food; how am I going to stay warm and dry; how am I going to keep people from stealing my stuff or doing me harm?' It was interesting to speak to the ones that wanted to talk. It made me realize how easy it is for us to ignore them while they're struggling right under our noses."

The downside of making a movie.

"I love the chance to control the end result. A movie is put together by a bunch of people and the end result, no matter how good, is never that direct translation of what you did, whereas a photograph or a painting is totally yours. Movies are about compromise. I can have as much fun figuring out a way to rewrite a poem, to wear it out until it really works. And it's the same with or music, or painting.

A lesson learned from The Road.

"No matter how bad things get -- you know, no matter how tough life is, it's always preferable to be a good guy, to be kind. You are going to feel better afterwards, no matter how tempted you are to be violent or brutal. This movie really earns that conclusion. It's uplifting to realize that there are people who, no matter how difficult the physical or emotional tests they're going through in life, somehow do the right thing anyway, not because there's a reward for it, not because anybody else is watching, just because it's the right thing to do."
Top of this page
Last edited: 10 June 2010 06:27:50