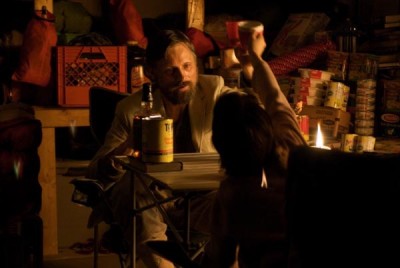 Image Macall Polay.
© 2929/Dimension Films.
"You don't know what might be down the road," the Man (Viggo Mortensen) tells us matter-of-factly in The Road.

True, but director John Hillcoat gives us a pretty good idea almost immediately. The washed-out earth tones of a post-apocalyptic America, strikingly rendered by cinematographer Javier Aguirresarobe, do little to hide the evil lurking within.

As the Man and his Boy (Kodi Smit-McPhee) make their way to the coast as winter begins to set in, they come across killers and thieves - and worse: "Cannibalism is the great fear," the Man says. Anyone who's read the bleak Cormac McCarthy novel - an unlikely Oprah Book Club pick - on which this film is based knows it's more than just a fear.

Mr. McCarthy wisely left the reason for America's near-annihilation open; it might have been war or terrorism, a natural disaster or an environmental catastrophe. He focused, instead, on the human reaction to it. So as they make their way under gray skies across a lifeless landscape, the unnamed man and son try to hold onto their humanity as they contend with men and women who have lost theirs all too easily.

It's a world the boy's mother (Charlize Theron) couldn't face. Her decision to abandon them is seen in flashback, and her increased role is the only major departure from the novel in Joe Penhall's exceedingly faithful adaptation.

The Road is a grim film, yet it's a beautiful one. There's a masterful performance by Mr. Mortensen, who brings a single-minded intensity to everything he does. Every emotion seems etched on this great actor's angular face.

The young Kodi Smit-McPhee is simply a revelation, which is lucky because his character carries the theme of the film. "We would never eat anybody, would we?" he rhetorically asks his father. " 'Cause we're the good guys. And we're carrying the fire." Those two lines are echoed throughout the film and represent the Man's legacy to his child.

Those stark lines of good in the midst of evil are clear enough that we don't need Nick Cave and Warren Ellis' soundtrack intruding so obviously in the end. It's the only misstep in this thoughtful adaptation that indicates that hope - though this message feels slightly tacked on - comes not from one man, but from one passing a torch to another.
Top of this page
Last edited: 8 June 2010 14:18:04