'The Road': One Of The Best Films Of The Year 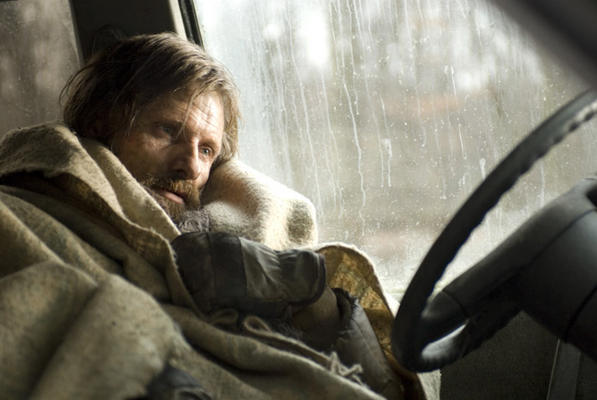 Image Macall Polay.
© 2929/Dimension Films/MGM.
It seems a strange thing to say about one of the most depressing films ever offered as popular entertainment, but The Road is a beautiful movie.

Not visually beautiful, for John Hillcoat's adaptation remains stubbornly true to the grim end-of-days scenario depicted in Cormac McCarthy's novel. This is a world in which sunlight never reaches the ground, where all plants and animals (save humans) have perished and the color green no longer exists.

But this film is beautiful in spirit -- in its defiance and refusal to give up, in its depiction of parent/child love that transcends the worst the world can throw at us.
Viggo Mortensen and Kodi Smit-McPhee are quietly spectacular as the Man and the Boy, a father and son pushing a shopping cart across what was once the southeastern United States. Some unnamed great disaster has befallen our planet -- nuclear war, perhaps, or maybe a collision with an asteroid, or a volcanic eruption on the other side of the world.

Whatever the cause, the Earth is dying beneath a shroud of dust.

In the film's early minutes screenwriter Joe Penham deftly limns the dangers they face. The Man and Boy avoid other people; the father carries a revolver with two bullets -- one for each if it comes to that.

An encounter with a band of armed men suggests what has become of civilization -- these marauders are constantly looking for game to eat. All that's left is the two-legged kind.

The apocalypse. Cannibals. Normally this is the stuff of cheesy exploitation.

But The Road is a pitch-perfect study in dramatic restraint. Striving to find a cinematic equivalent for McCarthy's sparse yet evocative prose, Hillcoat avoids numerous opportunities for action-driven excitement, opting instead to put his audience in the grasp of an unrelenting dread.

Instead of dwelling on the lurid, the director catches the ghastliness almost out of the corner of the camera's eye. One of the book's most shocking incidents is presented here in a couple of brief shots that last only seconds -- and that's enough.

And while the film's depiction of a dead planet is unrelenting, Hillcoat's focus always is on his two protagonists, who are heading for the coast hoping to find ... well, they don't really know.

Mortensen, whose wiry physicality in other films has suggested a powerful coiled spring, is magnificent as a drained, shuffling scarecrow, a dying man whose driving object is the survival of his son. And not only the Boy's survival, but his continuing innocence.

We're the good guys, he tells the Boy. We carry the fire. It's an oft-repeated mantra that separates them from the horrors they encounter.

Later in the movie the desperate Man behaves cruelly toward a thief who has taken their meager supplies. The Boy, his innocence blessedly intact, will remind his father that they're the good guys. Despite everything that has happened to him, the lesson has been learned.

Smit-McPhee does something incredibly difficult here -- he perfectly portrays a child born too late to have seen a TV show or listened to a radio, too late even to have tasted a simple meal of salad, meat and dessert. And yet there's a wondrous sense of discovery about this child. When his father proudly presents him with a decade-old can of soda scavenged from a rusted vending machine -- it may be the last Coke on Earth -- the boy tentatively sips, and his grimy face beams with wonder.

The Road is practically a two-person drama. But there are a few other players here. Charlize Theron shows up in several brief flashbacks as the Man's wife and the Boy's mother, who long ago gave up hope.

A nearly unrecognizable Robert Duvall plays an old man the two encounter in their wanderings; Michael K. Williams evokes our sympathy as the thief who suffers at the Man's hands. Finally there's Guy Pearce and Molly Parker as a couple who offer a smidgen of hope.

My main complaint is that the casting of recognizable faces in cameo roles is counterproductive, taking us briefly out of the utterly convincing world Hillcoat and company have created.

The Road paints such a grim picture of one possible future that it will take a massive act of will for most moviegoers to seek it out. If you're looking for mindless entertainment, this isn't it.

But if you're ready to face the best and worst that humans can be, if you're willing to be moved by kindness in a brutally unkind world, then you will find in The Road not just one of the great films of this year, but of this decade.