Source: Canadiens Magazine
Even A-list movie stars aren't immune to the allure of the bleu-blanc-rouge. Best known for his role as Aragorn in The Lord of the Rings trilogy, modern-day Renaissance man Viggo Mortensen knows all about the fine arts: acting, singing, painting and cheering on his Canadiens. We caught up with the 2008 Oscar nominee for Best Actor during a break from promoting his new blockbuster, The Road, to learn more on how he became one of Hollywood's biggest Habs fans. 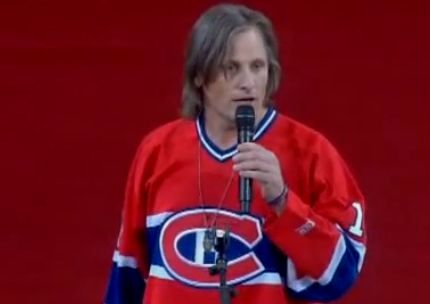 © RDS.ca.
So how does a kid born in NYC and raised in Argentina and Denmark become a Habs fan in the first place?

Viggo Mortensen: The sport that I grew up watching and still love is football - or soccer. When I moved up to northern New York in 1970, we didn't have Internet or cable TV. I would listen to Canadiens games on Radio-Canada, which is actually how I started learning French; watching Montreal play in the early '70s is when I really started to learn about hockey. My favorite player was always Guy Lafleur.

So just how big a Canadiens fan are you?

VM: I'm a really big fan and I have been since the early '70s. Apart from just the fact that they had such a great team, there was just a certain flair that team had. Lafleur, Bob Gainey and then later on in the '70s, Guy Lapointe, Serge Savard, Larry Robinson, Yvan Cournoyer, Steve Shutt all those guys just brought so much excitement to the game. You could have put together any combination of those great legends at any time and they would have won; they just had such great depth. But it was really the fans that got me into it. The way they got so into it reminded me of the fans in San Lorenzo. There's a certain spirit and tradition that goes along with that kind of glorious history. I guess it's easy to hang on as a fan since Montreal has had so much success, but there's still this die-hard quality that the fans have where you know that no matter what, that spirit isn't going anywhere.

Did you ever play hockey as a kid?

VM: No, I'm sure they must play hockey down in South America, but I was never really exposed to it. I got a pretty late start getting into it in my late teens even just as far as being a fan goes.

You're definitely not a bandwagon fan - didn't you even brave wearing your Habs jersey on the Toronto set of A History of Violence?

VM: (laughs) Yeah, I wore it all the time. I got a lot of heat about it at first because David Cronenberg and his entire crew are Toronto-based, so they were all big Leafs fans. They were good sports about it but I made sure to wear it around the set a lot.

We heard a rumor that Aragorn is also a big Habs supporter - did you really wear a Canadiens T-shirt under your armor while filming The Lord of the Rings trilogy?[/b[

[b]VM: I did - I wore it quite a bit, actually. I'll always look to see if the shirt peeks out on screen but I've never been able to see it. In []The Road[/i], you'll see it a few times. It sort of stands out because it's a movie that's very muted in terms of its colors so you'll notice my red, white and blue under there.

Is it a blessing or a curse to be best known for being a part of that epic film franchise?

You're a guy who delves really deeply into his roles. Did you really carry your sword with you offscreen?

VM: (laughs) That's been taken a bit out of context and exaggerated, but what happened was that I signed on for Lord of the Rings pretty late - they were already underway - so I had permission to take my sword home and practice with it there. I wasn't running around with it in the forest or anything like I've read in some places.

Explain how you channeled your inner Alex Kovalev to prepare for your role as a Russian mobster in Eastern Promises?

VM: (laughs) Him and a few others, too. It was more just his steady-as-you-go attitude and his body language that I was looking at, but it was sort of a composite character. I went to Russia and spent some time there, learning by interacting there, but I like the way Kovalev seems to carry himself.

You got your first Oscar nomination for that role. How big was that for you?

VM: It's kind of a weird, circus atmosphere being there, but of course it's a big honor; you never know if that's going to happen - if it ever happens - and even then, you never know if it will happen again. I figured it may be the only time I'll get to go into that building so I just wanted to have fun. I took my niece, which was fun to see everything through her eyes. I found it so strange walking out to see a lot of long faces and people just taking it so seriously, or sulking about losing - life's too short for that.

Being a dad yourself, how much easier was it to prepare for your role as a father willing to do anything to protect his son in The Road?

VM: That definitely helped. But the thing about The Road is that people know that book by Cormac McCarthy and they really care about it so it got everyone really into it. It felt almost like performing live in a way. There's always pressure in a situation like that, but I put more pressure on myself than anybody because at the end of the day, I want to feel like I've earned the right to play the character. The Road is also a really tough story mentally and emotionally even more than it is physically. It's a beautiful story and very emotional and even as we were shooting it was very moving.

Word is, you speak fluent Spanish, Danish and English and you're pretty well versed in French, Swedish, Italian and Norwegian. Which one really makes the ladies swoon?

VM: (laughs) I have no idea. I just know it's way easier to communicate with people if you can speak more than one language.

You also put those language skills to good use as a translator to get yourself into the "Miracle on Ice" game between the USA and the Soviet Union at the 1980 Olympics. As a New Yorker and hockey fan, what was it like to experience that in person?

VM: It was an absolutely amazing, surprising, exhilarating, incredible experience. I think more than anything, people were really stunned. The Americans, the Soviets, the fans - everyone was just sitting there in shock at the end of the game.

Growing up in Argentina, chances are good that you've been to a soccer game or two. How does the atmosphere at a pro soccer game compare to a game at the Bell Centre?

VM: You know what? I've never been. I never saw a game at the Forum, either. It's always been on the radio or on TV. A couple of times I've had my plane tickets all ready to go and then something would come up. Last year was the Centennial of San Lorenzo, my soccer team in Argentina, and I was working but I managed to sneak down there to catch a game. No matter what, in December, I will be in Montreal for the December 4 game if it's at all humanly possible.

You play the tough guy in a lot of your movies. When it comes to your favorites on the ice are you into the fighters, the grinders or the goal scorers?

VM: I like players who just keep fighting and don't quit. In both hockey and soccer, I'm a fan of players who lead by example. Players who don't whine and who don't talk too much - they let their actions do their talking. That's why a guy like Andrei Markov is great.

Who is your favorite Habs player these days?

VM: Well, I'm most loyal to the oldtimers - the Hall-of-Famers like Lafleur, Dryden, Savard, etc. But I'm excited that despite all the changes, Markov is still there. I like Cammalleri's style, but I think the interesting thing for me will be to see how the Kostitsyns and Carey do this year.

You're a painter, a musician, a photographer, an actor, a poet and you're a natural at swordplay. Is there anything you won't try at least once?

VM: You know what? I'm not so interested in skydiving. I'm not sure why anyone wants to jump out of a plane that's working perfectly well. I hike and I love horseback riding, but I'm not into extreme sports like skateboarding or snowboarding or anything like that.

You've worked with everyone from Al Pacino and Michael Douglas to Sylvester Stallone, Denzel Washington and even Demi Moore and Sandra Bullock. Who have you most enjoyed working with over the years?

VM: That's so hard because everybody's so different. What I appreciate in athletes is no different than what I like about fellow actors; I like people who go about their business and when success comes to them, they're grateful and they don't treat it like a given or like it will just be there forever. A lot of people can get lucky and have one great season or one great role, but it's what you do with it that matters.

VM: I haven't taken on any other movies yet and I'm not in a big hurry to do so. I'm still promoting The Road but after that I'm going to be doing a play in Spain called Purgatorio by Ariel Dorfman. I haven't done a play for 20 years or so. It was a scary proposition and the only way you learn is by being out of your comfort zone and not just doing the same things all the time. There's a certain nervousness you get in those few minutes before going up on stage like "Why did I say yes to this?" but once you go out there, if you don't put up a barrier and the audience connects with you, it's really special.