Source: Star Tribune
The Lord of the Rings hero tackles the most emotionally demanding role of his life. 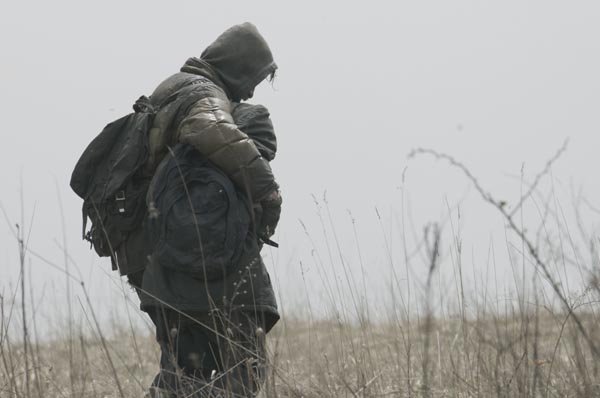 Image Macall Polay.
© 2929/Dimension Films.
It's easy to destroy the world in a movie; it's been done dozens of times. It takes great acting to make Armageddon meaningful. In The Road, Viggo Mortensen's potent performance puts a lump in your throat, forcing you to think about the people who've died and the families they left behind. He embodies the primal fear of losing the ones you love and being left alone in the world. He raises the post-apocalyptic tale to the rank of Greek tragedy.

The soft-spoken actor, best known for the Lord of the Rings trilogy, also has a broad creative streak. He's a photographer, musician, painter, poet and owner of Perceval Press, a small publisher specializing in art, essays and verse.

"'Artist' is what I put down on immigration forms when they ask your occupation," he said in a phone interview from New York City. "I figure that kind of covers it.

"I do like the movies as a job, because if you're willing to learn from it, it's pretty complete. It has all the other creative outlets in it. Music, painting, design, literature and photography. All those things are part of it, and I enjoy that. What I also like is that while the process of writing or painting is a solitary pursuit, making movies is definitely a team sport."

Mortensen, who has worked with such acclaimed directors as David Cronenberg, Jane Campion, Ridley Scott, Brian de Palma and Sean Penn, manages to find challenging roles consistently while other actors sit idle or make unwise choices. The trick, he said, is "I read 'em all and try to find ones that are good. The reality is there aren't many scripts that are well written, just a few.

"Then if I see something that's good, the next question is, am I afraid of it? If the answer is yes, that means it's something I don't know, 'cause that's usually what we're afraid of. I gravitate to things where, as I envision myself playing the character, I'm not sure how to do it."

The Road, which opened Friday, presented him with challenges unlike anything he had taken on before. It is a tale of a father and son struggling to survive a world where animals and vegetation are extinct, the cities ruined, and the scattered survivors stripped down to their basest drives. The project made him nervous "on an emotional level more than anything I've done before," he said.

"It's the boy who really breaks your heart in the book," he said. He was equally concerned that his role was reliant on whatever the young actor cast as his son would be able to do, "how talented the boy was and how wise he was, understanding the story moment-to-moment, and how tough he was mentally."

Mortensen is generous in his praise of Kodi Smit-McPhee, his 13-year-old co-star.
"There are certain things in terms of behavior, in terms of acting, that are beyond explanation. There's a commitment there that comes through in the eyes. You definitely see that with Kodi. What I was really happy to find was not only did he have really good instincts, beyond being precocious and emotionally available and willing to play make-believe, he was really well prepared. He understood the book and he was a very mature, inventive performer.

"I can't imagine this movie working as well if we hadn't found that person. You can prepare all you want, but then you've got to throw it away and hope that you're lucky."

A quote from Eleanor Roosevelt

A stickler for research and realism, Mortensen prepared for the film by talking to homeless people and studying Depression-era photographs. He also dieted to the point of emaciation, dropping about 30 pounds from his already lean frame.

But the great challenge he couldn't prepare for was carrying his character's emotional distress for weeks on end.

"The only way to do it is to go there and feel that," he said. "It's necessary to believe that you're in that situation, that you are that desperate and undernourished."

Throughout the shoot, Mortensen kept a quotation on his wall that summed up the film's themes of selfishness and altruism. It came not from McCarthy's novel but from Eleanor Roosevelt: "When will our consciences grow so tender that we will act to prevent human misery rather than avenge it?"

"Kindness is the most important thing," he said, "especially when everything is taken away from you - security, shelter. Being compassionate and loving, no matter how hard things are, is the most valuable thing in life. If you want the answer to what's the point of being alive, that is it. And it's easy to forget. It sounds almost trite. But if you go through that journey in an emotionally honest manner, you can come to that conclusion in a profound and memorable way."