Viggo Mortensen On 'The Road'

Source: MTV
Star says film must 'be tough to earn that uplifting ending.' 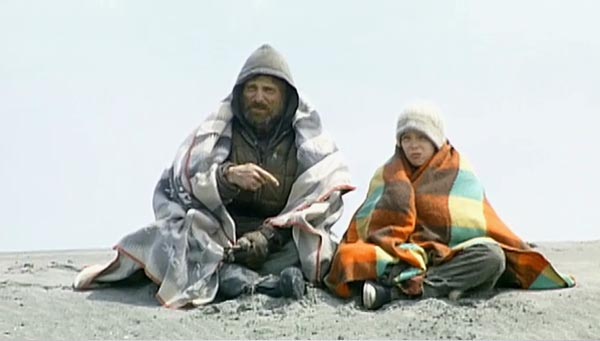 © 2929/Dimension Films.
Viggo Mortensen isn't just a celebrity, as you're probably aware. He isn't even just a fine actor. He's also a painter, a poet and a photographer, and he makes records, too, often in collaboration with Buckethead, the masked wizard guitarist. In addition, he's also conversant in half a dozen languages -- yet another body blow to an interviewer's self-esteem. But I soldiered on.

Mortensen stopped by our offices the other day to promote his new movie, The Road, which is based on Cormac McCarthy's Pulitzer Prize-winning 2006 novel. The book is very dark, and the director, John Hillcoat, has gone to great pains to replicate its tone. Mortensen plays an unnamed man making his way with his son (Kodi Smit-McPhee) across a country laid waste by an unspecified apocalypse. The land is prowled by bands of other men who've been reduced to barbarism in a never-ending quest for food and fuel. Wracked by hunger, they've become cannibals, bushwacking stray wanderers on the lonely roads, often raping and killing them, and sometimes penning them up in order to consume their flesh one limb at a time. The only respite from this desperate situation that Mortensen's character can find is in dreams of his pre-apocalypse life with his beautiful wife (Charlize Theron), now long-gone.

The picture is, as I say, very dark, but with points of light. It seeks to illuminate fundamental issues: What it means to be human; what becomes of our humanity when civilized values collapse; and how a parent, nearing the end of his life, can best send his child out into a harsh and dangerous world in which he'll no longer be around to serve as protector. This is not what you'd call a pretty picture, but it stirs considerable thought.

You knew the book before the movie was offered to you, I suppose?

No, I didn't. And I had read all of McCarthy's books, but I hadn't gotten around to that. I was just probably being stubborn because everyone said, "Oh, you've gotta read it. It's the one. It's his best one." I said, "Oh, I'll get to that." But when I did read it, which was as soon as I read the script, I realized how good of an adaptation it was. It's very faithful to the book; it's just as heartbreaking. So I said, "OK, now how do we do it?" Some people said, "You can't really adapt this properly. You'll never get the emotional impact that the book has because so much of it is in McCarthy's prose description of the feelings and the landscapes." But I think we did.

Were you daunted at all at this idea of having essentially two characters in this wasteland making this?

As soon as I said yes and hung up the phone, I thought, "Now what am I going to do?" It's fine for them to think that I can do it, but how am I going to do it? Not so much that it would be a physical ordeal, which it was ... but the emotional journey was something that I hadn't done to that degree before -- you know, that intense emotional journey. Based on that, my big worry was that they find a boy who could [play that role]. And we were lucky, Kodi Smit-McPhee is his name, he's from Australia, but you would never know it. In the movie, he sounds like an American kid.

Did you have long discussions with him about, "Here's how we're going to do this, and this relationship is very warm and intense because you are in a world with nothing"?

Not really. We just goofed around and we just did silly things before shooting. His dad -- who is also an actor and, I think, an acting teacher -- once he realized I wasn't some kind of sociopath and that his son would be safe with me, he'd let us hang out. So I said, "Let's go out for a walk," and we'd do that every day and hang out in Pittsburgh and it was snowing, and that was amazing to him because he had never seen snow. [During] the first week there were some really tough emotional scenes in very cold weather, particularly for the boy, and it was getting through those difficult first couple days that really pulled us together.

There's an ancient human theme running through the movie, obviously, of a parent trying to prepare their child for the time when they no longer will be around. What would be the best way to do that? I don't want to say facing your personal life, but ...

I'm a dad and that did help me get into this. I mean, obviously, the story is in some sense a parent's worst nightmare and as far as what you are talking about ... it's not just, "Well, you want to have enough money to go to college or [buy] a car." There is nothing. I'm gone. There's no roof. There's no food, and there are people near and far who, if they could get a hold of him, would do terrible things to him and eat him afterward.

At the beginning of the film, there is a father telling the son that "we have to carry the torch of humanity forward and not become animals," but as the movie moves along you can see that the father might be losing some of it.

Yeah, [the boy] reminds his dad, "You're not the same way, you're one of the good guys and good guys don't do this, they treat people this way -- and you're not doing any of that now. I think that means you're a bad guy." That's kind of what he's saying: "You taught me. Walk the talk." And I do realize he's right and it's a pretty intense moment when the boy calls me out on it. I'll say, "Yeah, we're still the good guys," and I try to justify it, like parents will. "Well, I'm scared. I'm trying to protect you. It's for your own good."

Was there any concern about how to get this movie to the public without making them think it's this enormous downer?

Well, I think they are still worried about that, because it is a good movie, and because I know that it's not that, it's tough. But you need it to be tough to earn that uplifting ending.