Source: E! Online
Aragorn, the king who reclaims his crown in the final chapter of the Rings trilogy, is a tower of quiet strength, dauntless courage and soulful sensitivity. In other words, the ideal man. And - ask any of his swooning female fans - the multitalented artist Viggo Mortensen was perfect casting. The royal mortal advises us on the pressures of being a role model, sex symbol and father to an Orc. 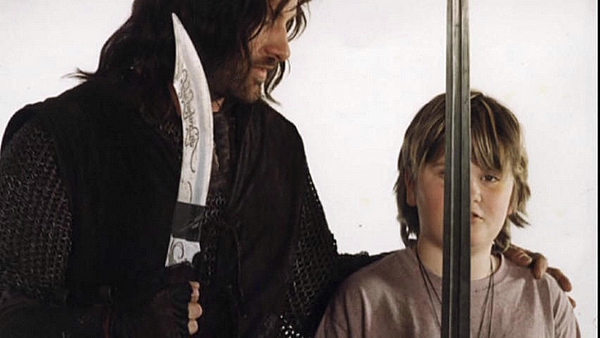 © New Line Productions Inc.
We hear that, life kind of following art, you eventually took a leadership role among the castmembers.

I think everybody, in different ways, had to step up to the plate. There were times when I, just like everyone else, had weak or uncertain periods. When, physically or mentally, I wasn't at my best, there was always someone who stepped up to, quote unquote, help get me through the day. And I certainly was available to the others when they needed me to be.

Did that reflect what you were doing as the Fellowship?

The characters in the story, just like us, are not shamed to show affection. They're also not ashamed to admit they're not sure how to do something or that they're afraid. That's one of the strong points of the story and one of the reasons why audiences from Japan to Argentina to Canada can connect. They can apply it to their own lives: "I have doubts too," "I'm afraid, too."

And maybe it's not such a bad idea to be interested in other people and to make the effort to look at things in a more compassionate way. Those are the things that Tolkien inspired in his story and that Peter and his crew also inspired in us.

You inspire just plain old passion in many female viewers. You've probably had more experience than your costars with this sex symbol business, but has The Lord of the Rings changed that part of your life at all?

I think all of us involved with these movies have gotten a lot of attention, more than we could ever expect. For the most part, I think that's positive; people have been kind and all of that. I think the message is that Peter and his team got something right, at least.

The odd part of it that I don't think you can get used to is it forces you to make an extra effort to protect your work space and your personal space. It's different now. But it's not gonna last forever, and I guess one ought to say thank you or accept a compliment. It's not such an oppressive thing, really. It's strange.

How did your teenage son, Henry, like playing an Orc in Return of the King?

He liked it. And the stunt team liked him - he's very good at martial arts. But he also did other jobs, like a lot of people. He helped armorers on the set, took care of weapons. He also worked in the wardrobe department and made some of the clothes. But the thing he most enjoyed was being an Orc. He was pretty good and pretty scary.

Does Aragorn kill him?

Luckily, the choreography called for me to evade him and Gimli to kill him. I might not have made it to that point.
Top of this page
Last edited: 15 April 2010 08:54:14