"You must have faith"

By Diego Santonovich - translated by Ollie, Sage and Zooey

Source: Ole
The Ciclón turned a hundred and two and celebrated it by inaugurating a chapel in Bajo Flores, paid for by Viggo Mortensen. The actor believes... the team will move up. 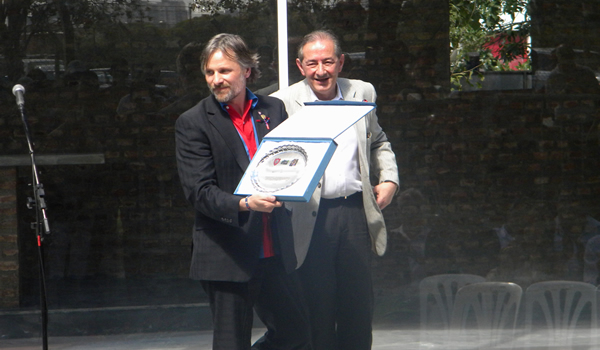 © san lorenzo usa.
It is one 1 o´clock in the afternoon and the Hollywood megastar celebrity, soon to embody Sigmund Freud himself in the cinema comes driving into the Ciudad Deportiva acting like any neighborhood fan. San Lorenzo has turned a hundred and two, and even though the team's real situation does not set off fireworks, it deserves the motorcade that took place in Boedo and the inauguration of the chapel in Bajo Flores, financed by Viggo Mortensen, the character described earlier, of course. About three hundred supporters and prominent names from the life of San Lorenzo joined in the cutting of the ribbon on the building ; among those present were Héctor Veira, José Sanfilipo, Roberto Telch, El Sapo Villar, Agustín Irusta, Angel Bernuncio and Alberto Acosta, among others, as well as the executives and three representatives of the professional team: Diego Rivero, Jonathan Bottinelli and Bernardo Romeo. Talking specifically about the rough patch the club is going through, the actor, about to premiere in this country his film, The Road, in which he plays a father protecting his offspring in a post-apocalyptic world, doesn´t detect the Four Horsemen in the azulgrana sky. "I support them all. The team isn´t going through a good moment, but you must have faith," he told Olé, in keeping with the occasion that brought him to the country where he spent part of his childhood and where he will remain to see the match against Lobo.

Viggo was the main orator of the day, as well as contributing two kinds of souvenirs. First, an impressive crow in bronze that he also donated to the chapel. Then, about 120 t-shirts, which took only a few seconds to fly from his hands. He also got a plate that almost moved him to tears and for which he expressed his thanks with a choked "Thanks for this, to all of you." Then came his speech which began with a "How good it is to be among so many faithful supporters and important sportsmen, especially on this Holy Thursday."

It was his words, also, that generated the most enthusiastic moment. "This inauguration is a way to extend the 102nd birthday celebration that began last night where the Old Gasómetro was. There are many people who are working little by little to return there. I'm in favor of the repatriation efforts. We must not forget where we came from, or underestimate what we have achieved. It makes you proud to be a Cuervo" brought the supporters to their feet. He invited everyone to the chapel even those without banners or a particular religion. "I hope that those who come will feel good here. And feel the colors."

Mortensen was so much on top of the construction work that prior to the event, he met President Savino to ask for a higher railing in the chapel area because it's very close to the fence on Avenida Cruz and the windows are very exposed. Also, he follows closely the players´ performance. His website, (Perceval Press.com) has supported them, including Simeone. It's a question of faith.
Top of this page
Last edited: 8 April 2010 15:50:03