By Román Perroni - translated by Ollie, Sage and Zooey 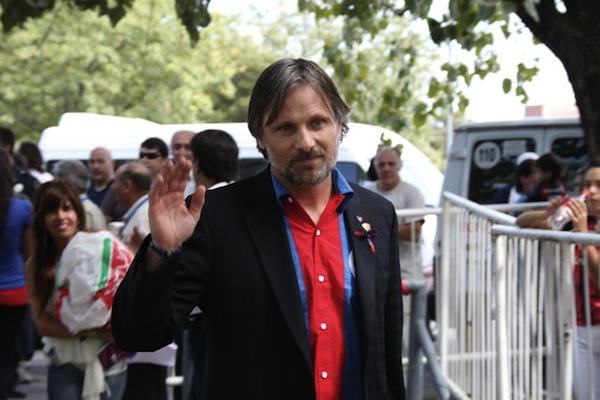 Image Juan Ayala.
© Prensa Casla.
His beard gave him away. Viggo Mortensen is already preparing to portray the father of psychoanalysis, Sigmund Freud. The actor finally accepted the offer by director David Cronenberg for the film The Talking Cure, to be filmed shortly.

Nevertheless, his face is already adjusting to the role he will be playing. Therefore, his visit to Argentina will only stretch until next Tuesday. A press conference for the show business world also figures in his plans. This Monday he will speak with the press to promote his new film, The Road, which will be premiering next April 29.

In the meantime, this Saturday more precisely, he will be present at Pedro Bidegain [the stadium nicknamed Nuevo Gasometro], against Gimnasia, to encourage San Lorenzo, which, on it's 102nd anniversay, received this illustrious visitor from the United States, his native country. And he showed that his passion for el Ciclon gets more intense every day.

On this Holy Thursday, Viggo arrived at 3 p.m. at Ciudad Deportiva, and quickly attracted the attention of everyone. In spite of the heat, he took care to be elegant in a finely checked black two-piece suit over the classic jersey of the Matadores [another name for the Cuervos], the team that he's admired since his brief childhood in Argentina.

At the end of the presentation by the official speaker and words of welcome from President Rafael Savino, Viggo took charge of the ceremony with a speech filled with charm, capturing the attention of some four hundred present.

But beyond the attention his presence provokes, he never abandons humility and from his position, raises San Lorenzo as high as possible.

At the end of the inauguration of the "Lorenzo Massa" Chapel, he gave away dozens of t-shirts that he had made himself and that were left over from the Centennial celebration. One by one, cuervos and cuervas of all ages were accepting this noble gesture by the Cuervo ambassador.

So it only remains for Mundo Azulgrana to thank him for all his work. For his continued support (besides buying a property in Boedo, the man has donated to the Instituto del Tango!) and obviously for his quality as a human being. As they say, "a great guy."
Top of this page
Last edited: 4 April 2010 13:14:34