Turning To Dust - The Gothic Cinema of Philip Ridley 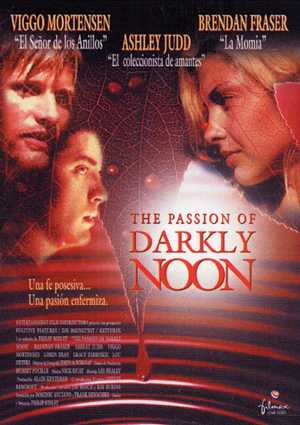 DVD Cover.
© Fugitive Features/Hauskunst/Keytsman Productions.
The Reflecting Skin (1990) and The Passion of Darkly Noon (1995) are two films that may have been forgotten in the steadily growing pantheon of contemporary British Cinema. Written and directed by novelist and playwright Philip Ridley, both films are visually elaborate and brutal meditations on the loss of innocence. Set against the blue skies and golden wheat fields of 1950's Idaho, The Reflecting Skin chronicles eight-year-old Seth Dove's premature transition from child to adult. By the film's end, he will have watched his father immolate himself, his mother lose her sanity and his only brother slowly die of radiation sickness. As his family slips into disarray, his few friends will be abducted and murdered. The film, as one character, Dolphin Blue, says "It's all so horrible isn't it? The nightmare of childhood... Innocence can be Hell."

If innocence is indeed Hell, then naming the film's protagonist Seth Dove is without irony: Seth is the Old English for Devil whilst Dove connotes peace, freedom and purity. By combing these two meanings into a name, Ridley implies that this character is a 'devil of purity', one whom is simultaneously innocent and corrupted, a child on the cusp of adulthood. Ridley subtlety places emphasis on this through a reoccurring image of Seth looking back. Having caused or participated in some violent act (be that exploding a frog, breaking into a house and destroying its contents or watching his friend being kidnapped) Seth runs away only to stop and look back at the immediate consequences of his actions. The camera lingers upon his young face, his black hair and black clothes a sharp contrast to the endless yellow of the wheat fields or the equally endless blue skies. His expression is blank as he takes in the dreadful moment. The more Seth looks back, the more he understands the small world in which he lives, slowly but surely realising that it is a world stained by death. Perhaps predictably, The Reflecting Skin concludes with an image that depicts Seth's final understanding of the horror within: he runs from his dying family into the sunset, stumbling down a furrowed field until he falls. Clawing a handful of dirt in each hand, he raises his head to the blood-red sky and screams in a painful catharsis of knowledge.

Given the traumatic ending of The Reflecting Skin and the beginning of Ridley's second film, The Passion of Darkly Noon, it is possible to interpret its protagonist as a grown up Seth Dove. Found wandering through a forest, Darkly Noon has escaped a Waco-like assault upon the religious community he was raised in. With his family dead, Darkly is an orphan in a world he barely understands. Under confident and unsure of this new world, Darkly stumbles through both the narrative events and his evolving emotions, unconsciously aware that both will inevitably come together in a violent conclusion: whereas Seth collapses under the weight of knowledge, Darkly's gradual understanding of the world in which he lives transforms him into a destructive force, another 'devil of purity'. Believing Callie, the woman he loves, to be a witch, Darkly decides to purify her through death and so, as the sun sets, he wraps barbed wire around his torso and then covers his body and face in red paint. He becomes a physical manifestation of his repressed rage, an avenging force of both good and evil. Arming himself with a coffin chisel, he then assaults Callie's fragile family unit in another protracted scream of cathartic release.

Because of these similarities, it is possible to say that The Reflecting Skin and Darkly Noon are almost interchangeable for both are concerned with a young male protagonist whose naïve understanding of the world causes them significant personal trauma. They reflect each other through keeping of a box of possessions - Seth hides an aborted foetus and catapult in his box whilst Darkly keeps a photograph of his deceased parents, a blood splattered Bible and a dead bird in his. These boxes function as symbolic coffins for their past, a mourning for the steady loss of innocence. This comparative content alone implicates a fledgling auteur status for Ridley, one which is given validity by his later novels and his work in theatre. When examining his oeuvre, regardless of medium, there is a strong emphasis upon the family, almost to the extent that it would seem that Ridley's sole autueristic preoccupation is with this one dramatic element. Both The Reflecting Skin and Darkly Noon function upon the unity of the family and how repressed secrets bring about its inevitable collapse. By placing this predominate element against other aspects of the narrative - the past, the horrific and the abused - it is possible to interpret Ridley's cinema as a contemporary reconfiguration of the Gothic. 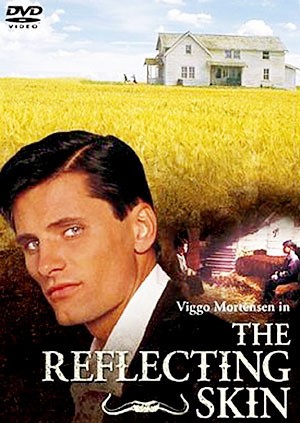 DVD Cover (Japan).
© Miramax/Zenith.
As a literary tradition, the Gothic can be elusive to define. Critics continue to debate its 'true' generic content by attempting to provide a definition that would encompass its many permutations. When considering cinema as Gothic, it would often seem that it is the visual quality and a palpable sense of atmosphere that acts as the defining traits - each film is dominated by a labyrinthine space that is poorly lit, a fetid environment in which the monstrous threat roams towards a predictable conclusion. But Ridley's films are Gothic in content and so reject this sense of style and replace it instead with an overwhelming amount of light. The events of The Reflecting Skin are constantly bathed in the burning orange glow of the midday sun whilst Darkly Noon unfolds in the soft dappled light that filters through forest canopy. As a consequence of this there is little visual darkness within each film and for those scenes that do take place at night; they are bathed in the cold and silver glow of moonlight.

For Ridley, the Gothic manifests itself through the monster, physical abuse, assumed incest, the past manifesting itself in the present and the repression of family secrets. Throughout The Reflecting Skin Seth believes that one of the villagers, Dolphin Blue, is a vampire. With her pale skin, black clothes and circular sunglasses, Seth's interpretation of her is fuelled by her comments to him: "I hate sunshine" and when asked her age, Dolphin replies "I'm two hundred years old." She continues to tell Seth that her husband made her young and now that he is dead she grows older, greyer, and deader with each passing day. When his friends start to go missing, Seth initially believes it is her but the local Sheriff, aware of an incident in the past, suspects his father. Similar qualities are present in Darkly Noon where the forest in which Darkly lives is also home to a monster, one that his friend, the widow Roxy, says is "vicious, mean, spiteful. Teeth like knives. And you know what it feeds on? Men! Beautiful young men. Men just like you." Roxy also tells him that the woman he loves is a witch because she seduced her husband and then killed him. For that sin she is an outcast, even more so because Callie also sleeps with her brother - another sin for which Darkly must cleanse her.

A further Gothic element to Darkly Noon is contained within one of its more disturbing scenes: fuelled by Roxy's comments and steadily slipping into a state of madness, Darkly prepares himself for the cleansing task by wrapping his torso in barbed wire. This scene is as beautiful as it is horrific, with Ridley's camera again lingering on the reaction of the protagonist: Darkly looks down at his smooth white skin against the silver wire, noticing the staining of his skin with his crimson blood, all bathed in the glow of the moon. In this singular moment Darkly's torso becomes the archetypal Gothic Body as it is one which is graphically and violently attacked, one racked with excessive pain and one which gives visual form to the horrors of religious tyranny.

Yet, by each film's end, these unnatural elements are finally revealed for what they actually are and all sense of horror dissipates in the vivid light of early morning. Dolphin is only a mourning widow who is desperately clinging to the memory of her husband in order to keep herself alive. Seth's friends are not being killed by her but by a group of young men who drive a black Cadillac. And the past that comes to haunt Seth's father is his painfully repressed homosexuality. Darkly's perverse act of wrapping himself in barbed wire can be interpreted in a similar way - he self harms as a means of suppressing his sexual desires for Callie, the girl he knows he cannot have. The "vicious" monster of the forest transpires to be Callie, albeit Callie as a deranged manifestation of a widow's jealously. The alleged seduction emerges as an attempted rape and the incestuous relationship unfounded as Callie is adopted.

Within Philip Ridley's work the world can be a dreadful place. Beneath the blue sky, within the wheat fields and dappled green forests are moments of painful darkness, pitch black memories that are waiting for the setting sun. And when the last golden glow fades and the truth becomes apparent, it manifests itself in a terrible fury: people are ugly on the inside for they lie, accuse, torment and murder the innocent as they slip into insanity. For those like Seth Dove and Darkly Noon the truth is better hidden behind fictional horrors because the acceptance of that knowledge is too painful to experience and one that can only lead to irreversible actions.
Top of this page
Last edited: 7 March 2010 06:38:33