Review: The Passion of Darkly Noon 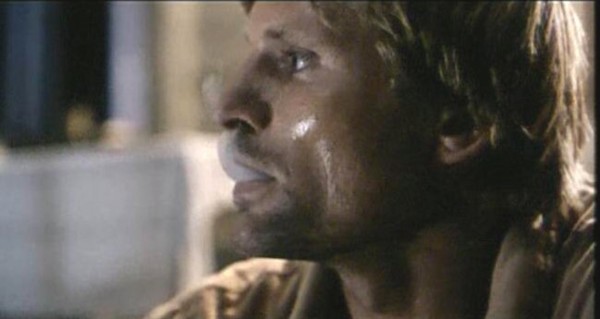 © Fugitive Features/Hauskunst/Keytsman Productions.
A twisted, haunting fantasy-tale, The Passion of Darkly Noon weaves the fate of strangers together and plunges them headlong into destruction. Stumbling through the forest, disorientated and exhausted, Darkly Noon (Brendan Fraser) spins into unconsciousness by a dirt-track. More through luck than judgement Jude (Loren Dean) manages to bring his speeding pick-up to a shuddering halt, narrowly avoiding the prostrate form of Darkly. Plucked from a solitary end, Darkly is placed under the care of Callie (Ashley Judd). A stunningly beautiful young woman, Callie lives in the middle of the forest with her lover Clay (Viggo Mortensen), who happens to have disappeared for a few days. Ordinarily Clay makes coffins for the town undertaker Quincy (Lou Myers), who sends Jude to pick them up. When Darkly awakes Callie learns that he was brought up in an ultra-religious community, which explains the battered bible in his pocket. When his parents died tragically, Darkly began walking and ended up lost in the forest.

As Darkly gradually recovers, the scars of his repressed upbringing act to suffocate every normal thought and feeling. Callie, used to being virtually alone, presents something of a dilemma for Darkly. Her unashamed physical sensuality stirs previously dormant reactions within him, yet these are without doubt sinful thoughts. The Bible says so and that's all the proof Darkly needs. Callie, unaware of Darkly's inner conflict, blissfully nurses him back to health, listens to his past and does her best to make him feel part of the family (now that his are all dead). During an afternoon walk through the trees, Callie takes Darkly to the most special place in the area, a hidden cave which contains neolithic paintings and thick stalactites. A cooling swim only heightens Darkly's frustration, a stark contrast to the extrovert manner of Callie.

Eventually Clay returns from the forest, into the overjoyed arms of Callie. Spying from the leafy darkness, Darkly crushes the freshly picked flowers intended for Callie. Stranded between the force of his own desire, inbuilt parental teachings and the radiant love of Callie and Clay, Darkly is tearing himself apart from the inside. Escaping into the forest, Darkly stumbles across an old woman, Roxy (Grace Zabriskie), and her precious dog (Dunja). Taking him back to her silver caravan, deep in the wilderness, Roxy explains her connection to his protectors. Callie was taken in by Roxy and her husband many years ago, when she was found abandoned on the edge of the forest, while Clay is her birth son. Lapsing into an embittered rage, bordering on madness, Roxy proclaims Callie to be a witch, evil and deserving of God's wrath. This is the key that Darkly requires, a catalyst allowing him to focus the emotional storm raging within onto a single task.

A masterpiece of visual exuberance, Philip Ridley has gathered a handful of naturally stunning locations and squeezed out an atmosphere laden with overtones. The forest itself is almost an extra character, paralleling the tone of events with a transformation from sun-dappled boughs to shadow-casting skeletal fingers. In many ways Callie is the Beauty, fair of heart and body, Darkly the beast of the woods and Clay the valiant but dumb (literally) knight. As such, each character brings certain elements to the plot and acts in a way guaranteed to lead to some form of final catharsis. However, as in most fairy-tales, the storyline is slight and only a small element of the final picture. Instead the interaction between characters, symbols, sound and light provide the engine which drives Darkly on his inexorable path towards chaos. It is these factors which make The Passion of Darkly Noon such a compelling and absorbing experience, encompassing viewers willing to experiment with a little logical relaxation. While unlikely to appeal to all, The Passion of Darkly Noon is worth a visit by those looking for something off the beaten track.