"The Passion of Darkly Noon" 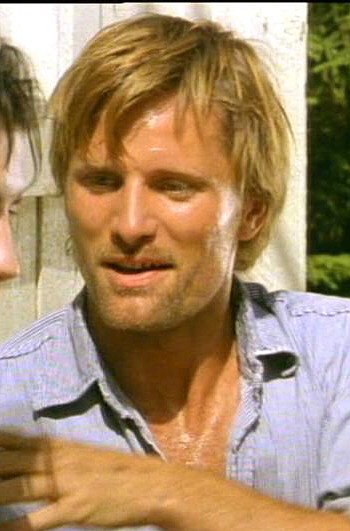 © Fugitive Features/Hauskunst/Keytsman Productions.
Philip Ridley has learned little from the UK reception for his debut feature. It could be because 1990's The Reflecting Skin was almost universally reviled in his homeland, but like fellow writer/director/artist Peter Greenaway, lavished with awards on the Continent. The Passion of Darkly Noon can only polarise the divide. "We're brought up in a culture of understatement," he recently told The Big Issue. "And the critics love it because it means they don't have to react. It's Merchant-Ivory syndrome. I don't buy that for a second."

Darkly Noon is a Gothic fairy tale set in the vast North Carolina forest (although shot in Germany). Teenager Darkly Noon (Brendan Fraser) stumbles into the life of Callie (Ashley Judd), who lives in the heart of the forest with her lover Clay (Skin veteran, Viggo Mortensen). In the beginning he's off lurking in the woods, leaving Callie to discover that the young stranger is the sole survivor of a Waco style siege. When Clay returns they endeavour to live as a family, but Darkly's passion for his new mother will eventually destroy them.

Like The Reflecting Skin, this is super-heated stuff. Every line drips with apparent significance - "Anyone to do with coffins is thriving"; "You've got to purify the forest" - every shot deliberately composed. Ridley as both writer and director is passionate about his symbolism. Clay is mute and makes coffins. Darkly bleeds onto his Bible. Callie chooses to call the mysterious, stuttering stranger Lee. The child-killings and nuclear fallout of his first film eventually worked against it as pure, impressionist cinema - the film buckled under the conflicting manners of story telling and the beauty of its painterly images. It's a mistake he doesn't repeat.

Best known for the eerie, homoerotic script to The Krays, Ridley is well aware of the portentousness of his tale, leavening it with a little dark humour. Halfway through the outside world imposes itself in the incongruous shape of a gigantic silver shoe that floats past on the river. By now the film is working outside of itself, the director shooting for a cinematic ambience beyond simple logic. The scene is absurd, funny, and at the same time oddly disturbing because the audience, like Darkly Noon, has no frame of reference.

John de Borman's camera drinks in the wonderfully lush, verdant forest at first, admiring its beauty and mystery. As the film unfolds, however, it becomes progressively darker, more threatening; the whole tone of the picture shifts with it. As Darkly's tenuous grip on sanity deteriorates and he takes to graphically wrapping himself in barbed wire, the editing is increasingly anxious and expressionistic. It cries out for a twenty minute, fast-cut, hallucinogenic catharsis as Darkly plunges through the house, everything his out-size chisel touches exploding in a shower of sparks.

Difficult stuff then, especially for British cinema. Its saturated colours, Nick Bicat's superb, superbly used score, and its refusal to engage in conventional story telling owe nothing to costume drama or social realism. For precedents we have to look to supreme sensualists like Michael Powell and Nic Roeg, especially the latter's brilliant, jagged experiments with editing. There are echoes in the blazing finale of the late Donald Cammell's masterpiece White Of The Eye.

The Passion of Darkly Noon is cinema as opera - huge, iconic, occasionally ridiculous, sometimes moving, undisputedly spectacular. Understatement is not Ridley's middle name: "Either people are going to get it big, or they're not going to get it". It will baffle and astound audiences in (unequal) measure, but the sheer drive and ambition he displays are undeniable.