Viggo Mortensen Interview: "This film has made me feel closer to my father"

By Laura Sacksville - translated by Ollie, Rio and Sage

Source: Cuore
Writer, musician, painter, photographer, actor... Few are the arts that do not yield to him.

The actor knows how to chose the projects he brings to the cinema. With his most recent movie (The Road) just opened, we meet a powerful Viggo who tells us about everything this movie has given him as a person. 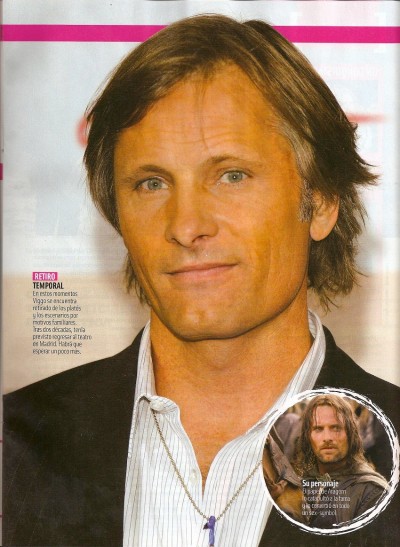 © Entrevista Cuore.
He was nominated for an Oscar (Eastern Promises), he starred in three of the biggest blockbusters of all time (the trilogy of The Lord of the Rings) and was declared a sex symbol after his acting in A History of Violence. But what motivates Viggo Mortensen (51) is not fame, but creating and collaborating with other artists. Poet, painter, photographer, musician and editor, as well as polyglot actor, Viggo is a clear example of a Renaissance man. We almost enjoyed him live, at the Teatro Español de Madrid, performing the play Purgatorio, but he had to abandon it to take care of his mother who is ill. We are happy to have him in theaters where we see him now in the adaptation of Cormac McCarthy´s (76) The Road, about surviving in a post-apocalyptic world surrounded by cannibalism and other horrors. Viggo plays the part of a father who, with his son, travels towards the coast looking for a safe place to live.

The film shows a very dark future for our planet. What do you think about that?

I´m a born optimist, and although sometimes I forget because I immerse myself in the hustle and bustle of everyday life, I believe in what my character says at the end of the movie: "If I were God, I would make this world just as it is." In other words, even if I could, I would not change this world or this life for any other. Any story that makes you think, accept and be thankful for the life we share on this planet, brief as this could be, it's positive. I don´t believe that people are stupid or evil and would repeat the same mistakes. I believe in the evolution of the spirit.

How much weight did you lose to play a character who is starving during the entire movie?

About 15 kilos. Enough for the audience to believe the character. The only thing I did was to eat less. That was not the hardest part, nor were the physical conditions, but rather the emotional journey of our characters.

Tell us, how did you prepare to face that challenge?

I have always thought that the end of the world or the end of life can happen any time, just like the sun comes up and sets every day. It´s something natural, part of life's process, therefore you don´t have to be afraid but be aware of it, and whenever possible or appropriate fight for it to happen in the best possible way. I have played characters who have deeply charged emotional moments, but I admit that this time has been very different. I, as well as Kodi (Smit-McPhee) the actor who plays my son, had to make our characters as real as the landscape surrounding them. The feeling of guilt and sadness they carry is very heavy and we were afraid we would bore the audience, but Cormac McCarthy created an extraordinary relationship between the father and the son, which is what keeps your interest in the story until the end.

Did the fact that you're a father help when it came to understanding the story?

I don't know. Given that I am a father, I don't know how I would have done it if I hadn't had a child, but in my conversations with Cormac McCarthy we talked about this matter, about the relationship between father and son. During the filming I thought as much about my son and about my father as about myself when I was Kodi's age. When all is said and done, it's a story of the love between a father and son, and of how their relationship evolves: the son comes to be the father's teacher. That's why any man could understand it and identify with it, whether or not he has children.

Does the movie evoke any particular memory from your relationship with your father?

Nothing in particular, but in general it reminds me of times when I was more critical and less understanding with my father. He's still alive and this movie has made me feel closer to him and that I should make the most I can of the time, that I should learn from him and keep communication open.

And with your son?

I've always been very close to my son, but naturally the movie has contributed to my appreciation of the time I spend with him much more.

Do you continue to have a good relationship with his mother?

Yes, I always have, not only because she is the mother of my son, but also because that I feel a great respect for her as an artist. She is a woman with much talent besides being a person of great integrity and strength, especially when things are hardest.

What is your biggest fear?

Not being honest with myself and not getting the most out of life. This is one of the reasons I stay very active, always doing things that interest me in the field of art, by editing books, writing, drawing, painting, photography... My biggest fear doing this movie was not to have sufficient courage to open myself as much as possible to the character and to be honest emotionally with myself and with Kodi.

Before, you were saying you are an optimist by nature. What are you doing to protect the environment and prevent the planet from becoming what it is in the movie?

Everything that's in my hands. I have a hybrid car, the first Prius that came out on the market; it still works great. My son shares it with me. I recycle everything I can. I try not to waste natural resources or to pollute. Small things that if done every day, serve to make a better world.

Is the rumor true that you didn't change your clothes or bathe during the filming?

No, of course not (laughs). Well, someone asked me that very thing the other day, and my response was,"Well, I'm glad it seemed I didn´t take a bath during all that time because those are the conditions my character lives in." I was supposed to have that neglected look, but it was a trick of makeup and costume. Yes, it's true that during rehearsals I wore the clothes for a whole week, and I even slept in them, because I had to wear them out so they would look increasingly worn.

In real life, what importance do you give to the clothes you wear?

Very little; I like to be comfortable and when I get dressed I always follow the same ritual. If I wear socks, I put on the left one first, and the same if I wear shoes; I begin with the left foot, it's an odd habit. My son was like me when he was a child; if he didn't put his clothes on in a certain way he wouldn't go to school. He's already overcome that obsession, but I haven´t; I don´t know why.

Your character likes to keep everything he finds, because of his survival instinct. Are you conservative with your resources? With your money, for example?

No, I´m rather stupid with money, but I don't mind. I think that if I run out I will find a way to earn some again. But I am a little like my character; I like to keep things that I find on the street, things that draw my attention. I love going to old bookstores and strange antique shops where you find everything, old belongings from anonymous people. They are tangible representations of life. My house is full of such things, things that have no material value, but are interesting to me.

His beginnings
In 1980 he graduated from the University of St. Lawrence with majors in political science and Spanish. In 1985 he began his film career in Witness, with Harrison Ford (67).

The trilogy
His big break came with the trilogy The Lord of the Rings. And it's true, he was initially unsure about accepting the role of Aragorn. It was his son, a faithful Tolkien follower, who convinced him.

Versatile
Painting is one of his passions. The paintings that appear in his character's studio in A Perfect Murder are his. He's also written a book of poetry and has done various jazz recordings.

Personal life
Viggo is one of those celebrities who guards his personal life very closely. He was married for eleven years to Exene Cervenka (54), singer for the punk band X. They have a son together, Henry Blake, (22).
Top of this page
Last edited: 23 February 2010 05:30:44
© Cuore.