On The Road With Javier Aguirresarobe

Source: Fotogramas
We visit the filming of the adaptation of Cormac McCarthy's novel The Road, an odyssey with Viggo Mortensen and the boy Kodi Smit-McPhee as transient protagonists. Our mission: to request, from the cinematographer of the film, Javier Aguirresarobe, the journal of his adventures. Said and done. 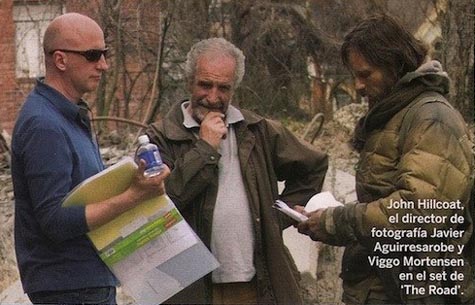 © Fotogramas.
We are in Astoria, Oregon. Under the mist of a longed-for gray day and on the verge of finishing his last shots, Javier Aguirresarobe gets our express request: to sit at the computer and relate his reflections on The Road, the translation to film of the apocalytic Pulitzer Prize-winning novel, The Road (ed. Mondadori) by Cormac McCarthy (No Country for Old Men). Here is his story.

JOHN HILLCOAT: THE BEGINNING OF THE ROAD
Everything began while I was filming Arráncame la vida (Roberto Sneider, 2008 ) in Mexico. One day I received an e-mail with The Road's script and a few lines by the director, John Hillcoat, inviting me to take part. His film The Proposition (2005), with Nick Cave's script, was a great critical success. I read Cormac McCarthy's novel. There can be no sadder, moving and hard story. And so visual. It left me deeply affected. Fifteen days later we met in Los Angeles. It was a four hour meeting. How to approach the photography? There is no sun, there is no light ... I talk about shooting day for night. Of manipulating the negative. Of night scenes like in the old movies and of the moments of the witching hour for the big scenes. More will than knowledge. We hit it off, though I returned to my filming in Mexico like one comes out of an exam, with uncertainty. Hillcoat waited four weeks to decide. I considered myself a lucky man.

PITTSBURGH: THE STARTING POINT
On January second I leave for Los Angeles and days later arrive in Pittsburgh, where the production is based. Adapting to the American lifestyle was difficult for me, though in the end I did it by taking charge of something that I consider essential: food. I became a cook. Rice, marmitako-style tuna, simple Spanish omelettes. And the crew was enticed by the smell of my cooking. I'm beginning to become part of the preparations for The Road. Its scoutings. Long treks through difficult terrain. The wintry air. The snow. Uff! What have I gotten myself into! The days are very short. The light collapses at five in the afternoon. I remember my well-heated apartment with its enormous kitchen. As well as my book of notes and my doubts in view of the visual and apocalyptic proposal put forward by the film.

LUIS RUSSO: THE SCRIPT SHOT BY SHOT
After three weeks of weaving the road of the film I arrive at an unusual destination for me. The construction of the movie by means of a storyboard. Luis Russo, an Argentine draftsman, arrives from Los Angeles. With Luis I begin unveiling the shots of every sequence. Hillcoat, seeing our work and immersed in a thousand problems, almost always agreed with us. Good sign. Luis was questioning the script. With a gun again, he tells me. That's right. More cannibals. That's what the script says, mon ami. Days pass this way. Patience. I, a skeptic with storyboards in general, think that this time they were very useful to me. They helped me to know what takes were necessary in the filming. Dreamed the same movie.

CHRIS KENNEDY: THE BUILDER OF DREAMS
Cinematography is the work of a team. And I don't refer only to camerawork. The art director, the Production Designer, is a key piece. An ally or a problem. Chris Kennedy, Australian and Hillcoat's right-hand man, is a special guy. Long disheveled locks and always wearing hiking boots . His work is coherent, silent, without ostentation. Fundamental. In the dailies I see his hand in everything. The shades of color. The smell of the deterioration. The atmosphere of sorrow. We have dreamed the same movie.

FIRST DAY: THE BEGINNING OF THE END
The great day arrived. They say that the problems or virtues of a shoot are outlined on that day. And that's how it was on The Road. It is sequence 9. The Man, Viggo Mortensen, and the Boy, Kodi Smit-McPhee, see an abandoned gas station. Among its rubble they find a little oil, gold on their road without hope. Afterward we move to the set for sequence 92. My nerves are on edge because night is approaching. I end up filming with that end-of- the-evening light, incomparable. And at just the right moment comes the wrap, the last shot. All in all, there had been 16 takes. Not bad. I have a feeling that this movie is going to be a mirror of this first day. A filming grazing the limits of the light. And fifty more locations await us.

VIGGO: THE FRIEND
Mortensen is The Man. That´s the way he is known in the film. Or Papa, as Kodi Smit-McPhee, his fictional son, calls him. Viggo is one of the pillars supporting The Road. I´d say he is everything. I have seldom seen an actor so dedicated, so ambitious and so ready for his work. Mortensen immersed himself in the project to the extent of giving all. He placed inconceivable demands on himself. After every take he would look me in the eyes and say: Have we got it? He's been a lesson in professionalism and comradeship. We shared wine and soccer talk. Furthermore, Viggo became Kodi´s father. They were more than co-workers in the shoot. Very few times I have felt such a perfect father and son chemistry in the cinema. Off the set they behaved the same way. In cinema, sometimes, you are witness to an unwritten love and tenderness. I owe a lot to Papa.

KODI: THE GREAT DISCOVERY
From a mystery to the most pleasant surprise of the shoot. This Australian kid (he was 11 then) left us open-mouthed. We wondered how a child would respond to this role. And Kodi arrived. Clear eyes, sweet gaze, soft voice. Innocent and generous little man, the only support to hold on to in the crumbling morals of the story. We have all lived affected by emotion at his acting, his lines divinely recalled. I predict the best for him. With affection and because he deserves it.

CORMAC: GREY AND COLD COUNTRY
Cormac McCarthy came almost at the end. He arrived with his son who, like Kodi, was then 11. He was a witness to our cold, grey and windy days. Silent and kind, he offered a lesson in humility and good manners. At the end of the first day he asked me: At what time tomorrow? He considered it an obligation to live it like the rest of us. His perfect Spanish surprised me. I´m sure he will remember us in that battle against the wind and the waves. And so we will remember him, behind us, with his son and those penetrating but kind eyes.

CHARLIZE: WELCOME SWEETNESS
Four days before the end Charlize Theron arrives. And it gladdens the eye. Why didn't she come before! Slim and beautiful, besides being a good actress, she is very nice. It is to her credit that she got into it overnight. And she did it wonderfully.

THE END: TALE CONCLUDED
I reach the end remembering, as well, Robert Duvall and Guy Pearce, two other travelers in this movie. Every job is a world and this one has been beautiful. I've fought to achieve a natural light, brushing the documentary. And a visual coherence. That was my vision and I have respected it all the way to the last of the 1,200 shots filmed. What am I left with? With Viggo's comradeship. Hillcoat's kindness. The generosity of my crew. And with Kodi's look, in the presence of his new family, in the presence of hope.