A Walk on the Moon 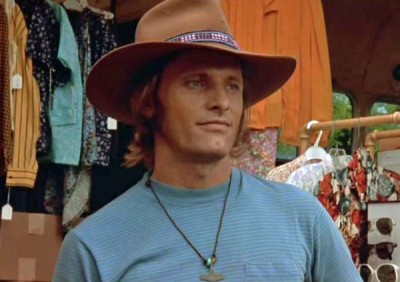 © Miramax Films / Village Roadshow.
I had to have some definition in my body if I was going to take my shirt off in the same movie that Viggo runs around naked in. Trust me, that's mighty intimidating. - Liev Schreiber


A Walk on the Moon

The rest of the leads also seemed to just click into place during the auditions. Getting Viggo Mortensen was Goldwyn's only "moment of panic," the director says, because he wanted a free spirit type, but definitely not a hippie, and he had his heart set on the actor from "A Perfect Murder," Gus Van Sant's "Psycho."
"When I saw some of Viggo's work, I thought, that's always who I've had in my head. I realized there is not one other actor anywhere who could play Viggo's part other than Viggo. He has this kind of complexity and mysteriousness to him. He doesn't have to say much and you get a lot."

"I knew I wanted him for that role in such a way that I was saying, Please take some of my money and give it to him....Because he gives immeasurable depth to what he does, full commitment, full conviction."

"I think being a conventional leading man is something that gives him a lot of trouble," says Goldwyn, recalling Mortensen's fears that A Walk on the Moon's Bluse Man might become a one-note sex god. "Of course, the success that implies is very attractive, but the trappings of that for someone like Viggo, who has so much to offer, can be very scary."

'I know that some people are describing Walker as a hippie, but he really wasn't. He was a little older than that generation and probably more influenced by jazz and the beat generation, so that made him maybe a little more open to things. It wasn't just about Woodstock for him.'

Liev Schreiber on heading straight for the gym the minute he knew Viggo had been cast as his wife's lover:

'I had to have some definition in my body if I was going to take my shirt off in the same movie that Viggo runs around naked in. Trust me, that's mighty intimidating.'

'I knew I was up against Viggo Mortensen. Come on, the guy is easy on the eyes, and he doesn't wear a lot of clothes in this movie. If anyone was to believe that I might get the girl, I was going to have to do some work. So I jumped rope, I ran, and I didn't eat.'

'If Viggo and I convince people we're enjoying every second of that encounter we've really done our job as actors. It was freezing in that river. The water was filled with debris and cigarette butts and the rocks were covered in little worms.'

Walker is no mindless hippie going with the flow. He cares about Pearl. Certainly, he cares about pleasing her sexually. She gets her own flight to the moon at the same time as Neil Armstrong. And what Walker does to her under a waterfall should be bottled.

Their sexual connection is reinforced by the blazing chemistry between Lane (the adorable child in "A Little Romance'') and Mortensen. While he seems pallid in his solo scenes, Mortensen comes alive when Lane is around. It's clear why Pearl would risk everything for this stranger.

As the Blouse Man, Viggo Mortensen is rugged and attractive, but the character is underdeveloped. In a way, this is unimportant, because his primary function is as a catalyst.

....Following its world premiere at the 1999 Sundance Film Festival, A Walk on the Moon received a standing ovation from the 1300 viewers in the Eccles Theater - an occurrence that's a testimony to the film's emotional strength and truth. It's easy to make a bad movie about a woman finding herself by cheating on her husband, but difficult to fashion one that hits most of the right notes.

A Walk on the Moon
Reelviews
James Berardinelli
1999

Originally called ''The Blouse Man'' in honor of its traffic-stopping title character, ''A Walk on the Moon'' has its elements of attractive fantasy. The blouse man is one of the peddlers who visit the camp to sell their wares, and it took Ms. Gray many rewrites to turn him into an object of desire. However, as played with silky eroticism by Viggo Mortensen, the gentlemanly Walker Jerome arrives to charm the camp's old ladies and weaken Pearl's knees.