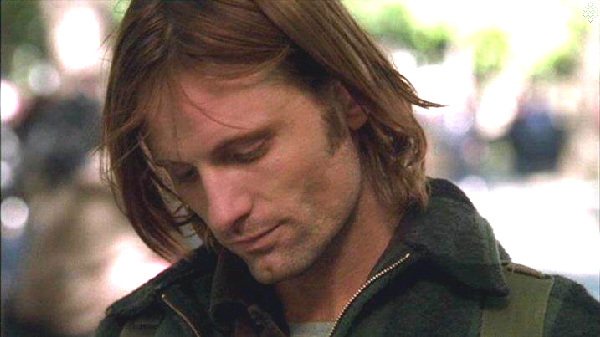 © Warner Bros.
Viggo Mortensen undergoes an interesting transformation in his key scene with Douglas; we believe him when he's a nice guy, and we believe him even more when he's not; he doesn't do a big style shift, he simply turns off his people-pleasing face. - Roger Ebert

In 'A Perfect Murder' he is - in spite of Michael Douglas's and Gwyneth Paltrow's presence - the star.

'I played a painter and I needed to have all of this artwork around me, so I asked if I could do some paintings myself. I just went crazy. I couldn't sleep. I did about 45 paintings in two weeks.'

'All three of the main characters in A Perfect Murder are ambiguous,' he warns. 'At my first meeting with Gwyneth, I took two photographs of her. I used both of them for the main art work in Murder. It helped me to believe in my character.'

'...I'm surprised they let me do that, actually. There was just a little time before we were going to start and I just asked, "What if I did this myself? I showed them a couple of small samples and they said sure if I made this bigger and I said OK. So it was one of those things where you're at a job interview and they say can you speak Chinese? Because if you can speak Chinese you've got the job. And, of course, you go, "Yeah sure. You'll water ski or whatever. Then, you just figure you'll figure out how to speak Chinese between now and next Wednesday. Well maybe it's not that extreme... I like to draw and stuff but the reason they used photography in it was because that was something that I did know and I had a certain stock pile of images I could play with. That helped!'

Viggo Mortensen on doing the paintings in A Perfect Murder
The Fire That Fuels an Artist's Heart
by Carnell
Carpe Noctem magazine #15, 1999

Because of his role Mortensen had to face an interesting phenomenon: Would David Shaw's images reflect the artistic feelings of himself, Viggo Mortensen or do they belong to the character of David Shaw?
"I think both are right", answered Mortensen, "I didn't have time to occupy myself too much with this duality. I think that the artwork represents on the one hand my own subconsiousness and on the other hand my ideas on who David is."

"...there's also some other personal belongings in the movie because, as he says, "my movies are a kind of photo album for me. When I look at them some years from now, they'll reflect my feelings and where I was at that time. The pants I wear are some I found in Denmark. Other belongings are some things I got from my aunt in Jystrup. They're just some small things which make me feel at home and more relaxed," Viggo says.

"Viggo's ability to go into his part is very special. And his demands on himself are unique. For instance, he lived for a long time in his character's shabby apartment in Brooklyn to identify himself with the character," says the producer Arnold Kopelson, who also was very impressed about one of the sex scenes between Viggo and Gwyneth Paltrow, a scene which was obviously too strong and authentic for the studio bosses and was, therefore, cut out of the movie.

Interviewer: Is it true that you sang serenades to calm Gwyneth Paltrow before the love scenes in 'A Perfect Murder'?

Viggo: How do you know that?

Interviewer: She has said that herself.

Viggo: That is correct. To calm her and create a certain atmosphere of intimacy I did sing a couple of love songs that I learned in Argentina when I was young. I don't know if that ended up scaring her instead.

Q: What surprised you about your other costar, Michael Douglas?

A: Just before Christmas, Michael was singing Christmas songs all day long, but he'd change the lyrics and he'd make the crew sing along, too. It was just goofy. You don't think of him as being that kind of a dorky guy.

"Normally I think it's an extreme lack of ideas to make re-makes," Viggo Mortensen says, "but on the other side ? when you can make "Hamlet" over and over again why not Hitchcock?"

In the end, the actor who makes the biggest impression is Viggo Mortensen, whose gentle presence seems to be masking some diabolical undercurrents. He's the only character who keeps us guessing throughout, and he manages to steal every scene he appears in by slyly underplaying the role.

Mr. Mortensen has the movie's richest role as the duplicitous painter who is coerced into agreeing to murder his lover. In the scenes in which he is supposed to appear sympathetic, he insinuates enough surliness to give his character a disquieting undertone of potential violence. But once David has been established as a rat, the actor shows flashes of pained regret for having to kill a woman he half loves.

But Viggo Mortensen, well heck, now there's an actor with some bite!! If you have yet to hear much about this man, open your ears, and listen wide. This guy can act...and act well goddammit! I have loved almost all of his performances, with his role in THE INDIAN RUNNER (5/10) and last year's G.I. JANE (6/10) standing out in my mind, and certainly a force to reckon for all great future character roles. Watch for him...he's hot!

Viggo Mortensen undergoes an interesting transformation in his key scene with Douglas; we believe him when he's a nice guy, and we believe him even more when he's not; he doesn't do a big style shift, he simply turns off his people-pleasing face.