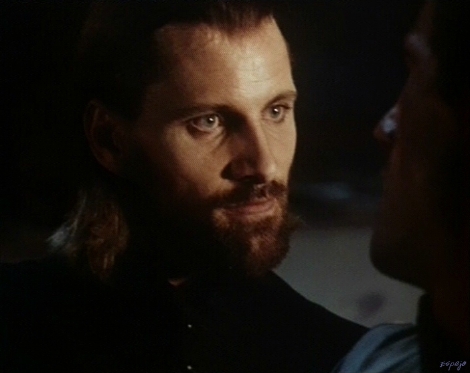 Courtesy of Viggo's Celluloid Haven.
© Neo Motion Pictures / Overseas Film Group.
Lucifer? Ah...that was fun, but difficult, because the truth is that I couldn't prepare the role the way that I usually do...going to Lucifer's house or meeting him or meeting his family. But I think that we all have a dark side and so I had to think a little bit about that. - Viggo Mortensen

For the small but pivotal role of Lucifer, a name actor dropped out at the last minute, necessitating a scramble to find someone who could bring something special to the role. Clabaugh had recently shot the lowbudget thriller American Yakuza (1994), starring a young Viggo Mortensen, and offered his name up. Lucifer was thus cast. "He had a ton of stuff to do, and he came up with a lot of fun stuff on his own."

Clabaugh waves off any notion he helped "launch" Mortensen's career, although he's taken great pleasure watching his ascent to stardom in the Lord of the Rings trilogy, A History of Violence (2005) and his Oscarnominated turn in Eastern Promises (2007).

"Viggo never wanted to be a star, he wanted to be an actor," Clabaugh observes. "Viggo was really consummate in everything he did."

His participation in this movie was agreed at a moment's notice. It went all so quickly that he read the script while flying out to Arizona, where the scenes in which Mortensen appears were shot. "I accepted, in part because I had always wanted to work with Christopher Walken," the actor says while sitting on the sofa's edge. His face lights up when saying Walken's name. It's evident that Christopher Walken is a cult actor for many young actors nowadays. "I would do any movie with him, no matter what [it was]."

On "The Prophecy'
Viggo Mortensen: A Very Devilish Devil In The Prophecy
by Ferran Viladevall
La Opinión 1995

So when you did The Prophecy, did it strike you as interesting or potentially controversial that religion was the basis for this horror?

No, that was kind of a ridiculous situation actually because the script was not complete. The director was the writer of Backdraft [Gregory Widen] so we thought he was going to write this extraordinary script. We all knew each other and once Walken signed up, who's going to say no? We all sort of arrived and kept expecting new and exciting pages, and he was not forthcoming with these new and exciting pages. We were in fact writing the script as we went....

...Viggo Mortensen came, he wrote that scene where he came in to play the Devil. That was just beautiful, and I didn't know Viggo until he got there. I just sat there watching him tell me this beautiful story. It was incredible what he came up with. That was an amazing performance. I was like, "Who is this guy?" Of course, then I had a big old crush on him but never saw him after the movie. Isn't that weird? Don't you think Viggo and I should work together?

"Even though I didn't have much time to prepare for the role, the character interested me and I explored his story. I see him as the prodigal son, very gifted but such a rebel that his father throws him out of paradise. I asked myself how he would have reacted. He certainly would have felt misunderstood, because he was the most intelligent and brightest of all the angels. Inevitably he would ask himself, 'Why has he rejected me?' So he would have had ego problems. Ultimately he's very human..."

Lucifer? Ah...that was fun, but difficult, because the truth is that I couldn't prepare the role the way that I usually do...going to Lucifer's house or meeting him or meeting his family. But I think that we all have a dark side and so I had to think a little bit about that.

"If they give me a Salvadorian script, I'm game."
By Isabela Vides - translated by Margarita
7 March 2007
Source: La Prensa Grafica

Hailed as 'mordantly witty', a young vaguely edgy actor named Viggo Mortensen wound up stealing the remainder of the film from Walken, creating one of the most memorable embodiments of evil ever put to screen. 'The devil doesn't really need to yell at people and slap 'em around,' says Mortensen now, six years later, 'because he knows he's powerful. That was one superficial guiding principle I tried to keep in mind. You are it. You are the Dark One and you don't have to prove it.'

On "The Prophecy'
His Occult Fellowship,
by Lisa Maccarillo
Fangoria magazine #208, 2001

'There were some silly things which I felt were interesting that were cut out of that movie for reasons of whatever, shots didn't look right, or they wanted to speed the movie up. I think [the studio people] were afraid we were too kinda wacky. "It's the devil, man. You can't do stuff like that. I go, "What are you talking about? I can do anything I fuckin' want. '

Viggo Mortensen on The Prophecy
The Fire That Fuels an Artist's Heart
by Carnell,
Carpe Noctem magazine #15, 1999

Very few actors can convincingly play the Prince of Darkness. Jack Nicholson is one, and Viggo is the other. Mortensen plays the devil with a malicious glee that can only be seen in psych wards.

Not surprisingly, he manages to turn in a good performance and makes a very frightening Lucifer (I would bravely argue that makes a scarier Satan than Al Pacino or Robert De Niro, but I'm not sure the fingernails and rose eating will help my case). He even manages the tricky balance of being horrible and seductive enough to slip you out of your soul, a balance few Lord of Darknesses achieve. Plus, he manages it in a mullet. Come on, you always knew that Satan not only invented that hairstyle, but rocks the business in the front and party in the back.

Stars in Rewind: Viggo Mortensen in 'The Prophecy'
by Elisabeth Rappe
Cinematical
12 October 2009

Cast as Satan, he's really the only one in the whole movie who actually holds his own with Walken on screen, and while you feel like Walken did this for kicks, you really do feel like Mortensen was doing his level best to channel evil in a way we haven't seen for quite some time.

Gabe's hubris gets so out of hand, he raises Hell -- that is, Lucifer. Perched on a post like a big, black-plumaged bird of prey, beautiful Viggo Mortensen is a long-haired, soft-voiced, doe-eyed seducer. But this devil's something else again when he reaches into Gabriel's chest, tears out the angel's heart and devours it -- uttering a chilling little burp of satisfaction as he swallows. Sauron would be proud.

Mortensen...chose a performance that is far from the usual portrayal of how one imagines the Prince of Lies should be. Mortensen, with long hair and full beard - his outward appearance reminding one more of Jesus Christ - played Lucifer with an impressiveness that was burnt into the audience's mind forever. He didn't yell, he didn't lash about, but he still seemed to be menacing. The devil knows his power. It is not necessary for him to demonstrate his power and to seek self-affirmation - all his terrible strength lies in his calmness.

With that, Mortensen provided a portrait of the devil, as it had not been seen to date.