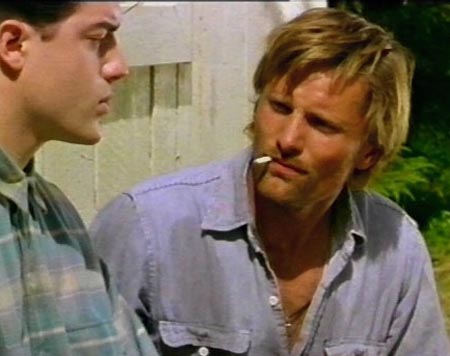 © Fugitive Features/Hauskunst/Keytsman Productions.
Viggo is one of the few people I've worked with who, I feel, is a true kindred spirit. - Philip Ridley


The Passion of Darkly Noon

....his reputation for dwelling deep within his characters was established long before Rings. For his role as a mute in 1995's The Passion of Darkly Noon, Mortensen remained silent throughout filming. "I only heard him speak after the shoot was over, and then only to say, 'Thanks everybody, so long.' He'd make clicking noises in the back of his throat to communicate," recalls costar Brendan Fraser. Mortensen refused to break character even to settle his hotel bill. "The concierge probably didn't speak English, and here's Viggo gesturing with his hands and pointing, scribbling on a pad. And I think Viggo eventually got 50% off the bill. If you know Viggo, it makes perfect sense. In a way, he transcends the acting."

'Viggo is one of the few people I've worked with who, I feel, is a true kindred spirit. From the moment we first met - when I was casting The Reflecting Skin in Los Angeles - it was as if we'd known each other all our lives. He understands my work totally. By the time we were doing Darkly Noon I hardly had to give him a word of direction. He knew instinctively what I wanted. Just as well really. Because Viggo - being Viggo - decided that, as he was playing a mute, he wouldn't speak at all for the duration of making the film.'

What has caused him to race down from his suite, probably giving several PR assistants heart attacks in the process, is the urge to impress upon me that one director has inspired him more than any other he has worked with - Philip Ridley, the British film-maker who cast Mortensen in his Lynchian adult fairy-tales, The Reflecting Skin (1990) and The Passion of Darkly Noon (1995).

"That man will never sell out," he enthuses, "because his vision is unique."

[Brendan Fraser's] performance is that good you could easily compare it to Norman Bates in Psycho, or Jack Torrence in The Shining. But Fraser isn't the only person who shines here. Mortensen is quite the revelation as well. Although he has no dialogue throughout as Clay is a mute, his silent actions are evidence that this actor is not one who doesn't need lines to act the role of his career. To a lesser-talented actor, this restriction might have resulted in a poor performance but does not.

"The Passion of Darkly Noon" Review
By Russell Hill
WILDsound

That this silly story doesn't play as unintentional comedy is due primarily to the sobering influence of some solid actors. Fraser can't make Darkly a psychologically complex or very interesting character, but he does bring some gravity to the role that makes him tolerable. Done up unbecomingly as a bleached blonde, Judd still evinces some of the directness, openness and emotional honesty that made her debut performance in Ruby in Paradise such a dazzler, while Mortensen, Zabriskie and Loren Dean, as a local kid, are all fine.

The strength of Ridley's debut helped him attract a top-tier cast, and they all perform to the level and tone of the script. David Lynch regular Grace Zabriskie gives good crazy as an old woman who uses Lee as part of her own vengeance against Callie, while Mortensen does his usual fine work here, getting across the depth and intensity of his feelings without the use of speech.