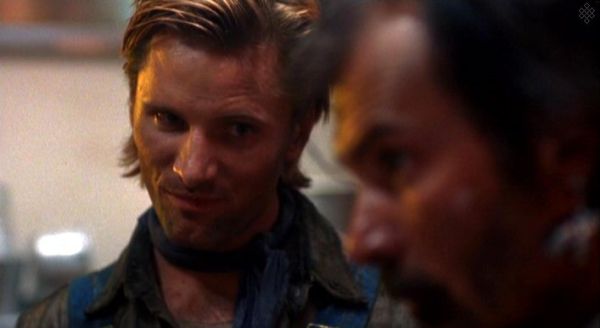 Courtesy of sagralisse.
© New Line Cinema.
That was fun. I don't know how many times they sent that to the censors. - Viggo Mortensen

'I was visiting a friend in Los Angeles and he had a part in the third. "We need a man. Wasn't that something for you?', he asked. Why not? I had seen the original 'Texas Chainsaw Massacre', and I thought there was something about it - in spite of everything. I hoped the third would contain the same. But the movie company got cold feet and cut away the most terrifying and gruesome scenes, and it ended up being a rather incoherent movie.'

"He was very cool," Mihailoff says. "Let's face it: At the time, he wasn't 'Viggo Mortensen,' you know what I mean? He wasn't the star he is today for sure, but he was a very serious, intense guy. We only had a few scenes together, but I remember very distinctly what a good actor he was. When they give me the hotrod chainsaw in the movie [more on that a little later], I'm like a big kid at Christmas – I can't believe it and I just keep swinging it around. And Viggo –I saw this in the dailies afterwards – Viggo ducks, and it wasn't rehearsed and it wasn't scripted. But it was very intelligent reaction to what I was doing."

...the production itself had a few hiccups; the originally cast actor for the role of Tex didn't work out, and had to be replaced (however he was replaced with Viggo Mortensen, so it's not exactly the worst thing that could happen)...
The screening [at the New Beverly Cinema, LA] was boosted by a fun Q&A with Foree, who revealed that he accidentally broke Viggo's ribs during their fight scene - the shot is seemingly in the movie (watch Viggo suddenly clutch his side after being thrown to the ground)...

"That was fun. I don't know how many times they sent that to the censors. People think that the ratings board is some kind of official [body which has an] answerable objective, answerable to the public or something. It's not. It's just a bunch of guys making decisions with certain codes to go by. I do think that if that movie had been put out by a big studio I think they would have gotten [away with more ....Anyway, they kept getting X's and so they cut so much out that I think the movie is only like 70 minutes long. Unfortunately most of the really funny jokes were associated with gruesome bloodletting of some kind or another. There was a lot of funny shit that was going on."

Robg.: Billy Butler and Viggo Mortensen are both in this and weren't they roommates at the time?

They knew each other then, yeah.

Mike C.: What ever happened to this Viggo Mortensen guy? (Laughs)

Yeah, I don't know! I wished him the best. But, no he was great?

Robg.: And I had heard that his first audition didn't go all that well? He had a bad day or something?

Well yeah. I brought him in because I had seen him in PRISON, which a friend of mine had written. And I thought he was great in that, and I thought he was a really interesting guy. I knew who he was, so I brought him in. The problem with the casting on this, there was always Bob Engelman there, and sometimes DeLuca. So there were other chefs in the kitchen, you know? It wasn't that his audition was bad, but New Line had a guy that they wanted. Deborah Moore, the executive in charge of production had a guy that she really thought highly of, and he actually was cast very briefly as Tex.

Then he booked a very high paying commercial that would've conflicted with the first day of shooting. So, I said you have to pick one or the other, because I need you totally there on the first day. So, he chose the commercial. (Laughs) So, I was able to get Viggo, so it all worked out. And Viggo, just like everyone else in the cast was always there, ready to go and had great ideas. Just a joy to work with, and I'm not just saying that. I can guarantee his approach to stuff now is exactly the same as it was then. He's just so committed and he's such a really good guy. All the family members were great.