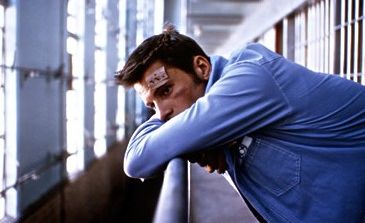 Courtesy of sagralisse.
© Empire Pictures.
He was this striking looking guy and he really was a good guy and still is. He's just a very nice person. But boy he really brought up the smoldering intensity right away. That was terrific. - Screenwriter Courtney Joyner

Before Viggo Mortensen became Aragorn and before Renny Harlin became known for helming such flashily forgettable action fare as The Long Kiss Goodnight and Driven, the two made sweet incarcerated horror music together with the aptly named Prison (1988). Well, not that sweet, but Prison does have the dubious distinction of being one of Harlin's best as well as the finest film to come out of the late '80s trend of the return of the vengeful executed (remember Wes Craven's Shocker?).

Review Fix: What was it like to work with Lane Smith and a young Viggo Mortensen?

Harlin: It was great to work with both, Lane Smith and Viggo Mortensen. At first mention I wasn't convinced that Lane Smith was right for the role of the warden, but after meeting with him and learning his passion for this part, he really became the character. He was fantastic in the role. Also, I met with about 80 young Hollywood actors for Viggo's part. I couldn't find the one. I was looking for a young James Dean. Then, Viggo Mortensen walked into the room. I knew almost instantly that he was the one. There was such a charisma about him. I really thought that this film would make him a household name. Unfortunately, since the film wasn't really released theatrically, it took Viggo a little longer to get there, but he still got there eventually.

It was a real low budget horror exploitation thing. The cast was a bunch of people [who were] New York stage actors. For that kind of movie, it was a pretty experienced group of actors; good actors got those parts. So, I was surrounded by people who really knew what they were doing, which was nice. It was fun to work with them. I mean, the story was what it was. It was a horror movie and it was on the cheap side and all that, but Renny Hahn had a certain amount of visual flair. Other that,I don't know if it stands out any more than the other movies at this time. I liked the location, I liked Wyoming.

Viggo had already been in Witness and one or two other things. He was definitely somebody that people were keeping an eye on and what have you. He was this striking looking guy and he really was a good guy and still is. He's just a very nice person. But boy he really brought up the smoldering intensity right away. That was terrific.

It excites me to work with somebody who is a new talent and an up and coming star, so that I can help to boost his career. I have done that before. I am going back in history, but in 1988, my first American movie was actually called PRISON and I found a young guy who had only done a couple of bit parts and nobody knew him. He had done nothing before of any note and I made him the star of my movie PRISON. His name was Viggo Mortensen. I really like working with people that I believe in, who can bring something fresh to a film."

Daily Grindhouse: PRISON is pretty remarkable on a lot of levels; it also features Viggo Mortensen in one of his first feature film roles. I know it's cliché to say an actor has intensity but I think PRISON is one of his more intense roles. There is a scene in the prison yard when he's going toe-to-toe with a prisoner who's trying to run the yard that is just cool as hell. His performance actually in EASTERN PROMISES kind of reminds me of PRISON because in both films he uses his eyes so much.

Renny Harlin: That's a really interesting point. When I was casting this little million dollar horror movie, I really wanted to get good actors though to make it stand out. We saw something like eighty guys in Hollywood, guys you would know from TV and bit parts in movies, but they all felt like the same old thing and I was really frustrated. After we get done with the eighty guys in comes Viggo who had hardly done anything at that point, I think WITNESS was his only film but I just looked at him and thought please let him know how to act. My mantra was that I wanted to find the next James Dean and he was awesome, very low key and on the spot I said this is our guy."

"After this movie wraps, I'm thinking of going into goatherding, like my mother and her mother before her."

Viggo Mortensen is something of a find as Burke, an inmate apparently bred on James Dean and Montgomery Clift films. All the supporting roles are solid as well. As for the Spirit of Forsythe, he's not just another masked menace or a flesh-rotted presence, but more of a malevolent specter à la The Keep. When his hell breaks loose, it's quite chilling.

Viggo Mortensen, in an early role before stardom, offers a strong-willed, no-frills performance that suits the character wonderfully.

This was Mortensen's first lead role, too, but he delivers with a calm and extremely cool persona who holds his own against the more traditional thugs.

Even though Mortensen is the lead he really doesn't say too much but his character just has this strong silent presence and he takes care of business.

Prison features a strong cast of recognizable actors, many of whom were at the start of their careers. Viggo Mortensen (The Prophecy) has enjoyed the most success and it is easy to recognize his talent in this early piece. His performance is subtle as a short-time convict gradually pushed into the role of reluctant hero.

This was an early role for Mortensen, who would go on to fame in The Lord of the Rings, Eastern Promises and The Road, among other films. It's interesting to watch him here as he channels a James Dean vibe, with his wedge-cut hair and sulky, almost shy delivery. He rises to the occasion when the dramatic scenes demand it, but for much of the movie his presence borders on the self-effacing, in contrast to his later work.

Mortensen, who can count PRISON as his first starring role, is equally great as the "strong silent" con who has no problem threatening to tear the dick off of his ward's biggest, baddest rapist in the middle of the yard. It's not a showy perfomance (particularly when you put it into context with the rest of Viggo's career, TEXAS CHAINSAW III included), but it's enough to keep the film anchored and give the audience a formidable anti-hero to root for once Forsythe's ghost begins wreaking havoc.