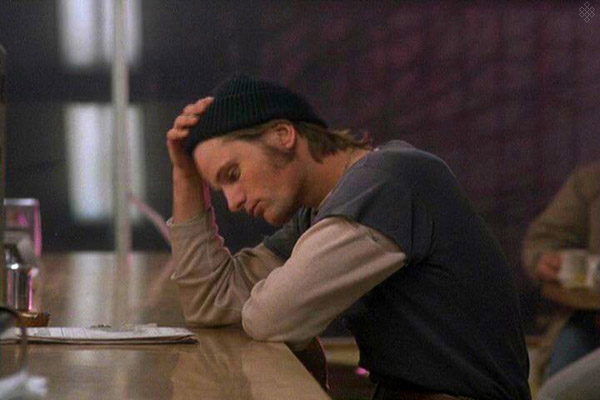 Courtesy of sagralisse.
© Columbia Pictures / Weintraub.
"In the beginning everyone was very obsessed with getting my name changed.'Viggo Mortensen - that's too long and too strange', they said. I suggested as a joke to change it to "Vic Morton'. That sounds like one of those movie private investigators in the 40's... "Vic Morton, private eye'. - Viggo Mortensen

"I remember trying out for a play once in junior high school, and as soon as the audition started, they said 'Speak up! Speak up!' And I just stopped and took off. I wasn't really cut out for it."

Mortensen….never had any overwhelming desire to jump into anyone else's skin. Instead, he drifted into it – prompted, in part, by an experience he had in Denmark when he was 21.

"When I was a volunteer at the Winter Olympics, I met this woman who asked me if I would go and look after her elderly parents in Sweden for three weeks. They were in their nineties, and they lived miles from anywhere. It was one of the strangest experiences of my life. Every morning, the old man would write a letter to the king explaining why he couldn't pay his taxes. The wife was obsessed with Björn Borg and with playing bridge. She would insist that I play with her, even though I had no idea of the rules. Also, you need four people to play bridge, of course.

"Every night we would sit down and pretend to play. We had imaginary partners and she would deal out the hands. I never had any idea of what I was meant to do, none at all. It was totally crazy, but it was one of the first times I had to try to pretend to be someone else and in an odd sort of way I found it fulfilling."

"......I had a good teacher, a man named Warren Robertson. He worked with me, and kind of encouraged me, and felt I had some, you know, raw talent or whatever. Everybody needs a little encouragement."

Students are analyzing the work of the 1980s director as part of their film classes, and Molly Ringwald, who starred in Hughes films Pretty in Pink, The Breakfast Club and Sixteen Candles, jumped at the chance to help them understand the moviemaker's themes better.... according to EW.com, she drew gasps when she revealed she wanted future Lord of the Rings hunk Viggo Mortensen to play her love interest, Jake Ryan, in Sixteen Candles, after kissing him during auditions.

She said, "It was between two men... It was Michael Shoeffling, who ended up being cast, and Viggo Mortensen, who had just moved from Denmark. I was 15 years old, and I flew to New York to read with everyone. It got to the (final) Jake Ryan shot, and we had the kissing scene. And Michael Shoeffling did not kiss me during the audition - Viggo Mortensen did.

"He made me weak in the knees. Absolutely."

Ringwald teamed up with Mortensen years later in Fresh Horses and the actor revealed he thought the kiss cost him the role.

She explained, "He said, 'I've always been curious, do you know anything about what happened?' And I said, 'Hey man, I was rooting for you. I really wanted you for that part.'

"I brought up the thing about how he kissed me and the other guy didn't. He said, 'I always thought that's why I blew the audition! I go over it again and again. Why did I do that?'"

"I was sent plane tickets to London, I did a load of tests, and when I thought the part was mine, they gave it to Christopher Lambert. What happened with The Purple Rose of Cairo, by Woody Allen, was worse as he cut all the scenes I was in. That was frustrating! I looked a real fool, ashamed, especially with my family and friends as I had announced my participation in the films to them. My parents thought I was lying and would say: "Son, tell us the truth! What do you do in New York?" [Great laughter]"

Viggo Mortensen
A Multi-talented Hero
Dominical
by J. A. - translated for V-W by NacidaLibre
27 August 2006

'The "Blood Red" auditions at the Actors Studio were notable for one other reason: Viggo Mortensen came by every day--barefoot, with long, dirty blond hair--wanting to audition in the worst way for one of my Italian immigrants. His dirty feet and hair scared me just as much as his blue-eyed blondness wasn't right for the cast I was building. After days of just being rude to him, I finally threw him out of the studio and told him never to darken my casting door again. I have since apologized to him for my lack of artistic vision and behavior. It's the one truly bad casting mistake I ever made. He's such a talented actor; he could have played Italian or anything else he made up his mind to do. I often use him as an example of how one-pointed, dedicated, and willing to be rejected an actor has to be.'

Viggo Mortensen was almost cast as Jake. Molly Ringwald said she was rooting for Viggo. Ringwald: "Michael Schoeffling did not kiss me during the audition - Viggo Mortensen did."

"But I like to think that had I gotten the lead in some of those early movies that I auditioned for, I wouldn't be the same person I am today. I would have been so busy being a star that I wouldn't have learned about anything else in life. I probably wouldn't have devoted so much time to writing, painting or music.

'Without the spotlight on me, I was able to live a life and learn a lot."

"Before the audition, I wanted to practice a little so I called up a friend of mine, [actress] Valeria Golino, and she helped me to get all dressed up. Then I walked on Broadway in New York in the middle of the day. Nobody even blinked an eye, and some guys whistled.'

Viggo Mortensen on auditioning for To Wong Foo, Thanks For Everything, Julie Newmar.
The Hot New 39-Year-Old
by Dennis Hensley
Movieline magazine, 1998

"In the beginning everyone was very obsessed with getting my name changed.'Viggo Mortensen - that's too long and too strange', they said. I suggested as a joke to change it to "Vic Morton'. That sounds like one of those movie private investigators in the 40's... "Vic Morton, private eye'. No, my name is Viggo Mortensen, I am Viggo Mortensen, and Hollywood will have to live with that'.

'In my first three movies I got cut out, among others in Woody Allen's 'Purple Rose of Cairo' and Jonathan Demme's 'Swing Shift'. It's a little embarrassing when you drag your friends of family along to the cinema and tell them that 'just watch now' - and then you've landed on the editing floor. Therefore I've stopped telling them in advance to pay attention to this or that scene. Because you never know if it's in.'

'Ironically, he had successfully auditioned for a Panida Theater stage role as Biff Loman in Arthur Miller's Death of a Salesman before learning of his selection for Penn's movie [The Indian Runner]. Deborah McShane, a Panida board member, clearly remembers the unpretentious, calm and kind man whose audition 'created an energy shift in the theater.

'Karen Bowers (Panida's manager) heard the very quiet, knowing and sensitive voice,' McShane recalls. 'She stopped what she was doing and came down the aisle. We cast him in the role.'

A Visit With Viggo
By Marianne Love
Sandpoint magazine, 2004