Comments about Viggo as an actor 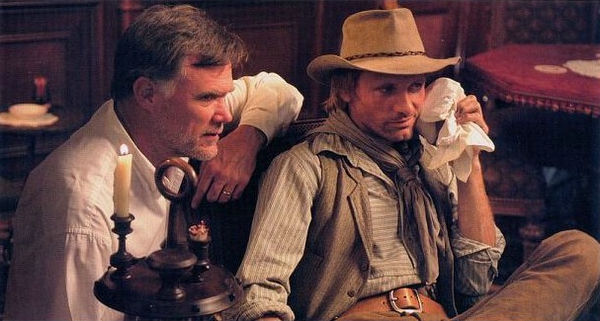 With Joe Johnston.
© Touchstone / Buena Vista Pictures.
Viggo Mortensen is not about the words. He's about being... present... - Ray Pride
Movie City News


Comments about Viggo as an actor

"Viggo has been a fantastic performer for years, he's very subtle, he's never showboating, it's always about the character, and I think that's why it's taken people so long to realise he's not just a good actor he's a great actor."

"he...takes the best out of Method and leaves the bullshit behind."

'I would want to watch Viggo Mortensen in any language.

Sanford Panitch, President of Fox International
Fox International Acquires Worldwide Rights To Viggo Mortensen-Starrer 'Everybody Has A Plan'
By Mike Fleming
Deadline.com
5 May 2011

There are some actors who work with the gesture: the fold of Robert Mitchum's eyes while he takes the last drag off a cigarette; Bogart's voice and the tic of his hand lightly touching his ear lobe to accompany a thought... Viggo Mortensen, on the other hand, can be completely expressive just by walking.

Philip Seymour Hoffman, certainly one of the great actors of our time, told us in a Venetian hallway of the Hotel Excelsior how he regarded Viggo Mortensen as one of the masters of the profession. A point of view that is totally shared.

The man has never disappointed us.

He's the kind of star directors dream about: professional, playful and eager to make a movie that doesn't wrap itself up in a neat pre-digested bow.

Viggo Mortensen on Everybody Has a Plan, Argentine Popes and His Beloved San Lorenzo
John Lopez
Huffington Post
21 March 2013

Now Mortensen has long been considered one of the best and most underrated of the new breed of serious, quietly intense and eminently watchable stars. He's like a Stateside version of Alec Guinness – a chameleon who never plays the same role twice.

"I've always sensed that I'd be insulting him a little bit if I called him a movie star," Johnston says. "If he chose to be a movie star, he could've done it a long time ago. . . . He's in control. That's the bottom line. He's not waiting for someone to say, 'Hey, you've made it.' He'll decide when he's made it."

I'm sorry to have to break this to you, but Viggo Mortensen is not a movie star. A poet? Yes. Photographer? Yep. Guitarist? Sure. Author? Uh-huh. Painter? Yessir. Actor? Most definitely. But celebrity? No way.

Despite his quirkiness, or maybe because of it, Mortensen, a 50 year old who has stubbornly resisted the formula for modern movie stardom, finds himself one of the last great leading men standing.

"He is methodical, exacting in his work, he carries out meticulous labors to do something that looks true, and projects it. He is like Robert Mitchum or William Holden, the class of actors whose work seems effortless."

"There are actors whose performances come as light emanating from the screen. Then there's Mortensen. His effect is gravitational. It draws you closer, inward."

....warmest regards to Viggo Mortensen for attending the awards. His star power actually helped keep the electricity in the building running.

Viggo Mortensen has so much on-screen magnetism, he'll probably destroy the credit cards of anyone sitting in the first 10 rows.

He's the guy you can count on to steal a scene or invigorate it.

Viggo Mortensen, however, is that rare American actor who is both muscular and humane, tough and sensitive, fighter and lover. He seduces us with a threat of danger, his chiseled Nordic physique and stunning blue eyes. Never over the top, for Mortensen, less is more. His performances are slow reveals of hidden information and emotion.

Q: What's it like working with Viggo Mortensen? Is there any competition about how far you can push each other?

Let me tell you something: it's impossible to have a competition with Viggo Mortensen because he's not on that vibe, you know? And neither am I. No, no, when you work with Viggo it's very warm. You get presents all the time and there is no competition on the set.

I think everybody finds Viggo to be a bit of a mentor because he's becoming a kind of — and certainly this is nothing that he would want — but I think he's becoming a kind of iconic figure in terms of how you should be an actor. Just your demeanor, your seriousness, but your sense of humor and the kind of research you do and your professionalism, and your loyalty to the project and to the people who are creating the project.

'To me, there's a lack of self-consciousness to the great actors. I think the performance of Viggo Mortensen in Eastern Promises is brilliant: he's living the guy's life on screen and you can't take your eyes off him. It's the same with Marlon Brando. You might not know why you're drawn to him, but you are.'

I tell him [Viggo] I've interviewed two directors he's worked for (Johnston for this film [Hidalgo] and Tony Goldwyn for A Walk On The Moon), and both said almost the exact same thing about him: Viggo Mortensen doesn't have to say much and you get a lot...

Sittin' On The Ritz
SPLICEDwire, by Rob Blackwelder
26 March 2004

Viggo Mortensen is not about the words. He's about being... present...

One of the things that has always fascinated me about Viggo Mortensen is the way he does ambiguity. The way he can look cruel and gentle at the same time. The way he can embrace extremes of danger and empathy.

...who would have thought that Cronenberg (a poet of unease and neurosis) was ready to mine a vein of dark heroism or to find the situations that could leave Mortensen looking like a god of understatement?

....if you have the opportunity to meet him in person and see how different he is from his role as Aragorn, you begin to appreciate that he is a true actor. He even morphs himself into his characters' physicality to the point where you might not recognize him when he is simply 'Viggo.'

In a world of paste reproductions Viggo Mortensen is a rare gem of creative energy. His work as an actor goes far beyond the normal level of effort exerted by a conventional leading man which results in his performances being elevated into works of art as unique as his poems and pictures.

"For Viggo, I think it's the experience of doing the work and achieving his high standards that are his measure of success," Diane Lane says. "It's nice being able to morph and disappear and morph again and reappear. He's like Hollywood's secret weapon. The only problem for Viggo might be that it's not a secret any more."

'He's a method actor. He is able to scream loudly if he has to - just watch G.I. Jane. He's an excellent actor, but a shy actor'.

The thought about Viggo Mortensen not feeling home in this city is not far away. He is at the same time too much and too little for Hollywood.

The Playlist commenting on how selective Viggo is choosing films.
Kevin Jagernauth
The Playlist
29 June 2012

'Many actors tend to think of their work in terms of career - this strange sort of concept that acting is like climbing up a mountain, that they get bigger with each job - and art doesn't move like that. Viggo knows that instinctively.'

".... because he's capable of far more astute and profound judgements than most of the people he's around, I think there's a banality of mind in this industry that a man like Viggo would sort of despair of."

"For me, there was no doubt that Mortensen was going to have great career after the Lord of the Rings: Fellowship of the Rings. But he didn't wait for this saga to be excellent, he always made very good career choices, he always took very interesting options. Personally, I find him excellent in The Indian Runner. He is very fastidious in his choices and it is totally apparent in his roles, in a way that I admire. He has a work philosophy close to mine. He is a bit like a big brother. So, his course does not surprise me, I am proud of Viggo, proud also that he is such an accomplice to a director of the talent of David Cronenberg. I wish only one thing for Viggo: that he continues to cut a path in this medium, because the medium needs actors of his caliber, who make films of course, for the public, but also for themselves, their own personal enlightening."

We can only hope that there is room on the A-list for a shoeless poet looking for beauty in Hollywood's seedy patchwork, who is gamely making it up as he goes along.