"You never know where despair will take you; you only have to look at Haiti"

By Susana Gavina - translated by Ollie, Rio, Sage and Zooey 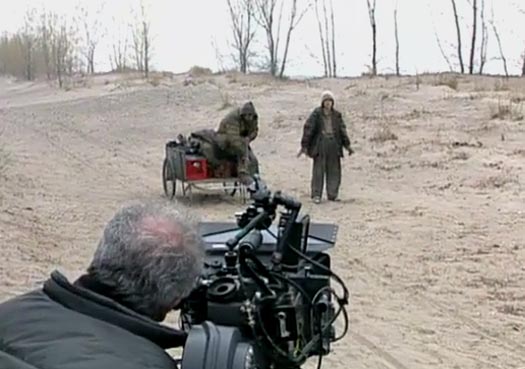 © 2929/Dimension Films.
Viggo Mortensen finds himself a little removed from the sets and the stage (after two decades he had planned to come back to the theater, in Madrid) but family problems have made him slow down. He is only back to fulfill his commitments to the promotion of his most recent film The Road, based on the Pulitzer prize-winning book of the same name by Cormac McCarthy, also author of No Country for Old Men which earned the Oscar for Javier Bardem.

It's three in the afternoon in Spain, nine o'clock in the morning in New York where the actor carries out this interview. Unlike his last appearances in our country where he was witty and funny, now a sad note can be detected in his voice despite his speech being passionate when he talks about this film which deals so harshly and honestly with the essence of human beings, and how they can react in extreme situations.

Journey after the Apocalypse

The Road tells of a post-apocalyptic journey through the United States, where all forms of life - except human - appear to have died. Everything has been destroyed and only man remains standing, gathered into packs that go out to hunt and capture other men in order to survive, reaching the level of the most primitive cannibalism. A story where the line between good and evil is fading, where circumstances try to justify their behaviour. Nevertheless, a father (Viggo Mortensen) and his son (Kodi Smit-McPhee) on their tireless way towards the South, a point of hope in this story, fight to not cross that line.

"This story has made me think about a lot of things: family, the world..., and what I would do in such a desperate situation. It's enough to look at Haiti, where they are living in such an ominous situation, an earthquake, that is going to add to the problems they already had. How do you react to that?" Mortensen wonders, to whom the disaster in the Caribbean country has immediately come to mind. The analogies to some aspects that are tackled in the film are so powerful that the connection springs forth unaided. It seems to be a sad coincidence. A mirroring of the reality of being human that has come to inform McCarthy's terrifying discourse. "In Haiti a high percentage of the population was already fucked up by poverty, and now this. Why? It makes no sense. You can read stories like this in which some characters act with compassion and others don't."

After leading roles like Alatriste, Eastern Promises, Appaloosa...Mortensen recognized that to make this film meant "a challenge" for him. "I was attracted to exploring those emotions. It's a story that has made me think about very personal situations," he confesses. For Mortensen, it's about "a great love story between a father and a son. A tough story, that touches you but which in the end gives you a certain faith in human beings. That was something difficult to achieve as much in the book as in the film."

Premiered already in France and in England, "where it was liked a lot," he deplores the barriers it has suffered in the U.S., "where they have abandoned the distribution of the film and people can't see it." The problem, according to Mortensen, "is that they didn't know how to sell it there. It just needed to be done with honesty."

For his costars, he has nothing but words of praise, especially for the boy, Kodi Smit-McPhee, who bears a striking resemblance to Charlize Theron, his mother in the story. "He was the best partner I've ever had on a shoot. During the casting he amazed everyone because he had read the book, and more importantly, he understood it."

Mortensen emphasizes that during filming, there was no" plot" to avoid difficult situations with Kodi. "He starred in every scene. He understood the difference between fiction and reality perfectly well." Of course, like the rest of the crew, he had to adapt to the harsh conditions of the filming, which lasted three months, always outside, suffering from the inclement weather. "Kodi was born in Melbourne and had not seen snow. We were very cold but he said it was one less thing to worry about because it wasn't necessary to pretend."

According to the actor, the original screenplay for the movie had been almost literal. "The complicated thing was to transfer the poetry of the book to the screen, a poetry that resides in the description of the landscapes and of the characters in those landscapes. A poetry that is also in the feelings between the characters."

The Miracle of Aguirresarobe

The maker of this miracle is the Spanish photographer Javier Aguirresarobe (candidate for the BAFTA award for this work), who immersed the story in a deathly gray color, which reflects the ashes of a civilization. "The work of the director and the cinematographer is very subtle, and it will not be given the appreciation it is due, even in ten years. Javier worked in very hard conditions, with very little light and color, and achieved a very beautiful narrative. Many of the photographers who have seen the movie have said to me that they would be unable to do some of the things that Javier has done."

In spite of the devastating experience that the film can turn out to be, the actor finds something of hope in it. "After seeing it, you realize that life is worth its sorrows. The fact that we are alive, that fact, is what's important."
Top of this page
Last edited: 4 February 2010 15:11:31
© abc.es.