Viggo Mortensen Takes His Act On The Road

By Louis B Parks 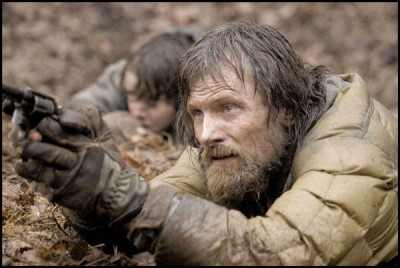 Image Macall Polay.
© 2929/Dimension Films/MGM.
There's nothing glamorous or thrilling about the end of the world in The Road. The planet -- people, plants and animals, even the atmosphere -- is dying away with a mournful, ugly whimper.

Author Cormac McCarthy's 2007 Pulitzer Prize-winning novel -- which finally hits screens Wednesday -- may be the grimmest of all post-apocalyptic tales. No pretty people bravely facing a future death as in On the Beach. No tough action heroes fighting eccentric villains in the style of The Road Warrior or a hundred other doomsday melodramas.

The unnamed lead characters of The Road, a father and son, spend their gray days searching for overlooked seeds and hiding from other humans while struggling to retain their humanity, nourished only by their love for each other. The filmmakers have, as much as possible, brought the book directly to the screen, adding nothing to make it more light-hearted or commercial, depending on the audience to care about these two companions and their desperate relationship.

"It's a very faithful adaptation. Probably the most faithful I've ever been part of or seen," says Viggo Mortensen. "And I include The Lord of the Rings, which was very faithful in spirit to (author J.R.R.) Tolkien."

Mortensen plays the father with the resolve and understated intensity of a person who knew long ago he was defeated but will not give up, especially while his son still lives.

The film starts 10 years after tragedy has befallen humanity. Neither McCarthy nor the film tell us what has happened, and the survivors are long past discussing it or caring.

But it's not really mysterious. The effects seem much like those predicted for nuclear winter after a major war. Debris has darkened the sky, draining the world of color, killing the trees, dropping the temperature. Plants cannot grow, and that means no food. By now, there are few survivors. Most of those still alive are dangerous. Many are cannibals.

"In the end," Mortensen says, "it doesn't really matter (what kind of disaster befell Earth). What Cormac Mc-Carthy has created, what allows for the dramatic tension, is he just strips everything away and intentionally didn't explain it. And he's right, because it's irrelevant."

The Road is about the still blossoming relationship between father and son. As McCarthy tells us in his first chapter, they are "each the other's world entire."

No one who reads McCarthy even a little will be surprised by the story's tone. The 76-year-old novelist, who lives in New Mexico, is -- as he has said -- willing to deal with the tough issues of life and death. 2007 proved a watershed year for him. The Road won the Pulitzer. No Country for Old Men, made by filmmakers Joel and Ethan Coen, was a box office hit and won the Oscar for best picture (awarded in 2008). And Oprah Winfrey added The Road to her 2007 Book Club selections. Winfrey even got the famously private McCarthy to do a rare interview: He said his own protective feelings toward his son, John, now 10, were the inspiration to write The Road.

That feeling of protection and love infuses all of The Road.

"That was the biggest challenge for us," says Mortensen. "He makes it about them, about their relationship. It's purely about the emotion they share. That's the journey. The road through this destroyed environment is a metaphor for this relationship.

"Sure, I did research and thought about it, but in the end it's about that moment-to-moment relationship. When you take everything away, that's when you see what's really going on inside people and what they're made of."

Fortunately for Mortensen, who is noted for intense preparation to get the look and feel of his characters just right, he is also the father of a son, Henry, now 21.

"It helped me initially," he says. "I was able to talk with Cormac McCarthy before we started shooting. I had my book with all my notes and the script. We just talked about our sons."

Mortensen, who usually makes only one film a year, was more than ready to take a break when The Road was offered in 2007. He had recently done Eastern Promises, for which he was best actor Oscar nominated for 2007; Appaloosa, a western; and Good, a little-seen film about a good man caught up in the Nazi rise to power. But, an avid reader of McCarthy, he put aside his plans for a break in order to make The Road.

At first, his biggest concern was having the energy that would be required for the part. "How am I going to find a way to get across what McCarthy does so well, that emotional weight that the man is carrying?

"My next question, which was the most important for this movie to work, was where ... are we going to find a boy like that? We have to find the best young actor in the world. A kid who is pretty much a genius actor and has some kind of wisdom that stands out.

"The challenge, really, was making the relationship between the boy and the man work, to be credible. The audience is not dumb, if they don't buy it emotionally, you don't really have a story. If the boy isn't unique and mature and alive and heartbreaking -- like he is in the book -- it doesn't matter how well we prepare the movie, it's just not going to work."

The filmmakers selected 11-year-old (now 13) Australian actor Kodi Smit-McPhee.
"Kodi had that thing in his eyes," Mortensen says. "As much as he is a well-adjusted and normal kid, and a bit of a prankster on the set, which kept our spirits up, he also had a gravity, a presence. He commits so fully and has such an understanding of the story and the book and knew what we were trying to do. There is a thing you cannot manufacture; it's either there or it's not. There is a profound melancholy (and) knowing in him."

The ongoing relationship between the father and son gives the movie a sense of hope. Throughout their years together, it has been the man who has instructed the boy on what it means to remain one of "the good guys" in a world gone mad. But as the years and losses add up, it is more and more the son who brings the dad back to his humane roots.

"You're crushed but somehow uplifted at the same time," Mortensen says of the story. "That's what we had to get to. We had to earn that and the only way we could do it is not take short cuts, in terms of the look of the movie and in terms of the emotional trip that these characters go on.

"And only then can you come to that beautiful, simple conclusion that love is the most important thing, that kindness matters, especially when you have nothing else to hope for."