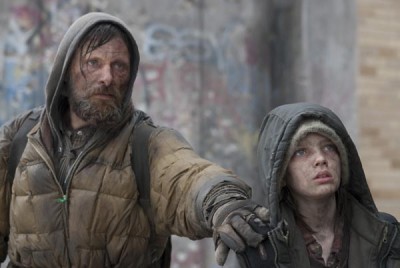 Image Macall Polay.
© 2929/Dimension Films.
In his latest movie The Road, Viggo Mortensen looks a sorry and destitute sight as he shuffles along wearing sodden rags, more than two stone below his normal weight, his handsome face largely disguised by an unkempt beard, and dark, hollow rings around his penetrating blue eyes.

As screen images go, you couldn't find one more different from that of the powerful and imposing warrior Aragorn, the heroic Lord of the Rings role that shot him to international stardom in Peter Jackson's blockbusting trilogy.

Not for nothing is The Road Oscar-nominated Mortensen's most challenging and controversial film choice yet.

This is the bleak and downbeat screen version of Cormac McCarthy's Pulitzer Prize-winning novel about the end of the world; an epic, post-apocalyptic tale of the survival of a half-starved father (Mortensen) and his 10-year-old son (Kodi Smit-McPhee) as they journey across a barren America that has been destroyed by a mysterious cataclysm.

Life is unremittingly tough in a world without any energy, power, vegetation or food.

There are constant threats and danger, such as marauding scavengers and hunters, some of them cannibals who keep a cellar-full of barely human cuisine in a big house on the hill.

Mortensen had to make a physical transformation for the role.

"Obviously, I couldn't look extremely well fed, so I lost some weight, I ate less, and I was more careful about what I ate," says the 51-year-old, who estimates he lost around 30 pounds that way.

"But after a certain point, it was more a leap of faith for everyone involved.

"It wasn't really about the preparation. I watched certain kinds of movies, I lost some weight, and we thought about the logistics, but it was much less about the externals, and far more about revealing yourself from the inside.

"It was much more an internal job than I've ever experienced before."

The Road includes several flashbacks to his life with his wife (Charlize Theron) before the great disaster - before she took her own life, rather than see it taken by what, or who, she knew coming.

In the pre-apocalyptic scenes, Mortensen looks more his own healthier self.

"There was a big feed before the last few days, when we did all the flashbacks with Charlize," reveals Mortensen. "I just went out and made a complete swine of myself."

As for a better understanding of what it would be like for a man to be on a trek with his son across a devastated landscape, Mortensen thought of his own son, Henry, now a 21-year-old university student.

"Throughout the movie, I'd think, 'My son did something like that,' after something that Kodi did," says New York-born Mortensen, who is now divorced from Henry's mother, American singer Exene Cervenka.

"But after a while, it didn't matter. Just thinking of my son was a way in to play the role - and then I put it away.

"You don't have to be a dad or a mom to relate to the predicament these people are in - this man and child."

Mortensen is as introspective, serious and brooding an actor as you could find at the top end of Hollywood's A-list of leading men, and as such he is perfect casting for The Man (we never know the name of his character).

For the director, John Hillcoat, there was never any question that anyone other than Mortensen should take this singular role.

"If anyone could survive in a post-apocalyptic world, it would be Viggo," says the Australian film-maker, who first won acclaim for his 2005 film The Proposition.

"It's such a challenging and extreme survival world that he has to do things that have to be credible."

Most of The Road was shot in the winter in rural Pennsylvania to simulate a world that has gone through such a huge climactic change, and some scenes of desolate towns were captured in areas of New Orleans not rebuilt since Hurricane Katrina.

Mortensen describes himself as a huge fan of Cormac McCarthy, author of the original novel, although he had never read The Road before being sent the script.

He admits he was probably more familiar with McCarthy's novel No Country For Old Men, which went on to be a hit movie by the Coen brothers.

"Even though No Country For Old Men has won Oscars and sold well as a book as a result, The Road is still Cormac's most far-reaching, universally appealing work," says Mortensen, who was Oscar-nominated for best actor himself for his 2007 role as a tattooed Russian gangster in David Cronenberg's Eastern Promises.

"It's easily understood, the dilemmas, by any culture. But I hadn't got around to reading it, just out of stubbornness.

"I kept seeing it in airports and then it was on The Oprah Winfrey Show, on her book list. It was a big deal.

"Then I read the script, by Joe Penhall, and I thought it was a really good script, and a great story, and I realised it was quite an honour to be offered this role.

"So I ran right out to the store and read it - and it's one of those books that you can't put down.

"I read it all and realised this film's screenplay is probably the most faithful adaptation of any book, not just in spirit, but in letter - and that includes Lord of the Rings, or anything else I know of that I've been in or seen."

Although The Road is very different from The Lord of the Rings, both films share huge mythic landscapes and aspects of other-worldliness.

And Mortensen could find comparisons between the experiences of making both projects.

"The Lord of the Rings was a film, like this one, where the crew had the book," he smiles.

"And as Joe Penhall's script was very true to the book, even down to Cormac's prose descriptions, the crew was looking forward to that, and you appreciate that kind of support; when you feel that people are really into the story, that it's not just another job, for the crew members."

In order for The Road to come together, it was clear to the film-makers that casting the role of The Boy (as the son is known) would be crucial to the success of the movie.

As gruelling as the shoot was for Mortensen and the crew, the pre-teen actor who plays the son would have to be both survivor and a great natural actor to keep up.

Though the casting process was thorough, encompassing several hundred boys from around the US and Canada, an audition tape that Kodi's father had sent from Australia was the one that won out.

"I think that Kodi's performance will be a historic one - honestly, I think it's going to be one of those people remember for years and years," says Mortensen, who has played opposite some of the seasoned greats, including Al Pacino, Sean Penn, Ian McKellen and Robert Duvall, who appears in The Road in the role of Old Man.

"I've been lucky, I've been able to work with some very good performers, but I never had a better acting partner, ever.

"I have never worked with someone who is so consistently in the moment, from take to take, pushing himself, pushing me, pushing everybody," he adds.
Top of this page
Last edited: 4 January 2010 15:28:47
© Media Wales Ltd.