The Road's Vision Of Apocalyptic Doom 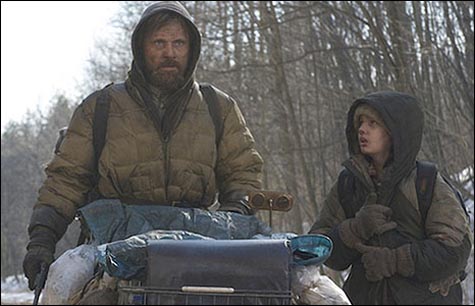 Image Macall Polay.
© 2929/Dimension Films.
The Earth is reduced to a sunless, choked wilderness and human life is all but obliterated.

But a nameless man and his son survive in the barren ruins of civilisation, and are embarking on a gruelling trip by foot in the vague hope of finding something of the old world.

The bleak vision of Cormac McCarthy's novel is brought to life on screen by lead actor Viggo Mortensen, who admits he ate less and altered his diet to capture the emaciated, worn state of the post-apocalyptic survivor.

He also slept in his clothes for several days during the shoot to make the sense of vagrancy and lack of possessions seem more realistic.

"I read the script and ran right out and got the book which I just couldn't put down," he says.

"The landscape was so real, gritty and truthful that you had to live up to that as an actor - you just couldn't hide."

The 51-year-old's pivotal relationship is with his on-screen son, who was born after the event which dealt a deathly blow to humanity.

The pair's interaction is at the heart of the film, and Mortensen said he was "worried" about how the producers would find a boy capable of the role.

But the Lord of the Rings star has nothing but praise for Australian actor Kodi Smit-McPhee, who was 11 when the film was made.

"He is amazing in the movie and an extraordinary individual," declares the Oscar nominee.

"It's a measure of his talent and humanity that he was able to be joyful as a kid on set and then just focus and deliver his character's sorrow and fear," he explains.

Not only do the pair face extreme physical challenges, but threatening straggles of other survivors who have turned to cannibalism.

While the boy has hardly any references to the old world, his father's flashbacks are the only interludes of sparkling colour in the film.

When he wakes up from dreams of his former life, the grinding sense of reality and horror is gut-wrenching.

"It came down to being quite naked and very honest from the inside," says Mortensen of his performance, which is an early tip for an Oscar nomination.

"It had to be that way of it wouldn't have worked. Kodi could pull certain things out of me and would return it. The complicity that was forged in hardship can be felt on screen," adds the actor.

"In the end, it was all about us being brave enough to let it all hang out. It was much more of an internal job than I've ever experienced."

The Road has been called "unbearably sad" and "tough" by some critics, while its makers have been quick to point out that it is a story with a glimmer of hope.

McCarthy's novel, meanwhile, captured the imagination of America with its powerful message about the unconditional nature of parenthood.

Mortensen agrees, saying "you would have to be obstructed in some way not to be moved by it".

"I've seen a lot of people with a sort of blissed-out look on their faces but tears in their eyes at the same time.

"And any story that can make you feel that this world is beautiful and worthwhile has done its job, and so does this film," adds the star.

The reason why the Earth has turned into a ashen, burnt-out shell is never clearly explained, but a line from an elderly traveller - played by Robert Duvall - hints at climactic catastrophe.

"Some people said it was a con, but I believed in it," says the aged man, who has clung onto life in a world where times and dates have become immaterial.

While The Road concentrates on the survival of two individuals, there is a chilling message about why they have been robbed of the Earth's warmth.