Source: Los Angeles Magazine
An email exchange with Viggo Mortensen on the subjects of hope, endurance, and human nature 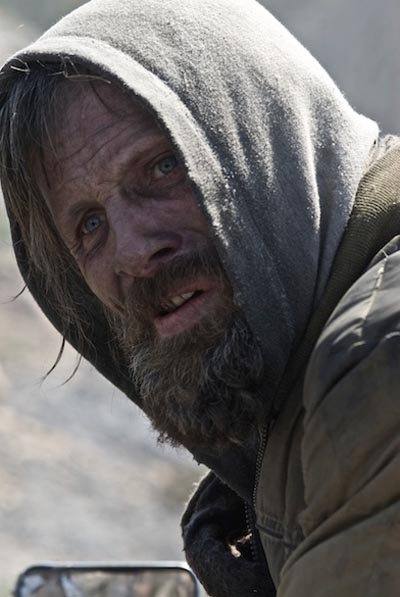 Image Macall Polay.
© 2929/Dimension Films.
He has been nominated for an Oscar (for the 2007 mystery Eastern Promises) and was declared a bona fide sex symbol (after his turn in the 2005 crime drama A History of Violence). He's starred in three of the biggest-grossing movies of all time (The Lord of the Rings trilogy in 2001, 2002, and 2003). But Viggo Mortensen has always been motivated more by collaboration than celebrity. His new film, The Road, is an adaptation of Cormac McCarthy's Pulitzer Prize-winning novel about survival in a postapocalyptic world of cannibalism and other unimaginable horrors. As "The Man," Mortensen navigates this devastated landscape with his son (played by 11-year-old newcomer Kodi Smit-McPhee). We exchanged e-mails with the actor, poet, publisher (of the L.A.-based Perceval Press), and polyglot (he speaks Danish and Spanish, among other languages) on the subjects of hope, endurance, and human nature.

Hi Viggo,
The Road is true to McCarthy's novel in that the nature of the cataclysmic event that has ruined the planet is never explained. As you constructed your character of "The Man," though, you must have filled in that blank for yourself. Was it a comet, or did humankind bring the end of the world upon itself?

It does not really matter, because the character cannot do anything about it. I think that numerous things happened -- fires, floods, drought, earthquakes (which the book and movie refer to) as well as fighting that led to the destruction of the power grids. Once things went wrong, there was no more Internet, phone, TV, radio, so it was not possible to know what really had happened and was continuing to happen all over the place. As when we have had blackouts, big snowstorms, fires, floods like those following Hurricane Katrina, or even as a reaction to events like those of 11 September, 2001, in New York and Washington, D.C., many people tend to isolate. General ignorance and wild, paranoid speculation tend to take over.

You've had a lot of physically demanding roles, from sword fighting in the LOTR trilogy to horseback riding in Hidalgo to wrestling naked in Eastern Promises. But The Road seems to be in a class by itself. How much weight did you lose to play a man starving to death?

I am not exactly sure. Enough to be credible as the character. Maybe 30 pounds or so. It was a basic requirement of the story that I not look well fed, so I simply ate less. That was not the hardest part, though. Nor was the hardest part the physical endurance test Kodi and I took part in by working in the cold, wet environments. The hardest part for both of us was the emotional journey, being exposed on the inside.

How did you prepare yourself emotionally to imagine the end of the world?

I've always thought that the end of the world, the end of me, of anything, can happen at any time, just as the sun always goes down at some point each day. It is natural, and not something to fear so much as be aware of and, when possible and appropriate, struggle against.

This may sound odd, but The Road had unexpected echoes of WALL-E, last year's animated movie about an Earth used up and left behind by humans. Though WALL-E was clearly aimed at a different audience, both movies highlight the tenacity of love and the importance of even small gestures of kindness. Did you see WALL-E?

Yes, I did. I get your point. Had not thought of that. Thanks!

Were there any other movies you thought about as you prepared for this role?

For inspiration with regard to my understanding of Kodi's character and regarding the environment, I looked at some of Tarkovsky's work -- Ivan's Childhood and Stalker, for example. I also had another look at Sokurov's Mother and Son and Dreyer's The Passion of Joan of Arc for the emotional truth of the performances and cinematography. I listened to certain music, looked at photographs, read certain kinds of poems. I also spoke with people who live in the street in different cities, when they were willing to speak with me.

Do you see The Road as a cautionary tale? As in: Here's a glimpse of the price we could pay for ignoring global warming/nuclear proliferation/fill in the blank?

Let's not look past the fact that in this country and around the world many places already look that way, owing to natural as well as human-generated destruction of the environment, and many people are living lives of desperation, barely surviving and understandably falling prey to their worst impulses out of fear and hopelessness. Many places and many people are ALREADY THERE. By the end of the story the characters come to understand, as we potentially do, the truth of what is written in the Talmud -- words to which can be found in most any spiritual teaching text: "The highest wisdom is kindness."

Did inhabiting this bleak world change your perspective on life?

Just as "The Boy" reminds "The Man" to follow the lessons he himself has tried to impart with regard to kindness, I was reminded many times in the telling of this story that this world and all of the life in it are precious. As my character says, "If I were God, I would have made the world just so." In other words, even if I could, I would not trade this world or this life for any other.

Some people have described The Road as a horror movie. How do you react to that?

It does not really make sense to me. I do not think it will be in that section at the video store.

You agreed to do The Road at a time when you were worn out and ready for a break. Was there any way in which being exhausted was an advantage going into this extreme role? Did it make rawness more accessible?

Yes. Just as being a father gave me an initial way in, a shortcut if you will, to understanding the story and my character, being a bit tired to begin with gave me a start on that aspect of the role.

How much did you draw on your relationship with your own son, Henry, for inspiration?

He was always there with me in some way. I did not have to think about it. The wisdom of "The Boy," and of Kodi, the instinct for kindness, are very present and always have been in my son.

You've said that you learned a lot about acting from Smit-McPhee. In the film's production notes you're quoted as saying, "I have never had a better acting partner, ever." What is it about Smit-McPhee that leaves Al Pacino, Ed Harris, and Ian McKellen in the dust?

I did not say he was better than them, but rather that none of them was better than Kodi. He was every bit as alive to the potential of any scene and as technically equipped to make the most of every moment as Robert Duvall was in his fine work as "Eli" [also in The Road]. Kodi is an unusually mature and inventive actor and had moments of brilliance each and every day that most fine actors can only dream of having once in a great while. There is a purity, a degree of focus in his work, that allows his natural intelligence and goodness to make themselves evident.

More than once during the film, Smit-McPhee's character asks you, "Are we the good guys?" The idea that there is a line that good people will not cross is something your character holds dear. Are you a Rousseau man (man is basically good) or do you side with Hobbes (man is naturally wicked)?

I am an optimist.

A while back you were quoted as saying that you were listening to a lot of conservative talk radio. How can monitoring that make you anything but a pessimist?

I sometimes feel sorry for them and their families, and for the people who might be swayed to choose contempt over compassion by the hateful and often deliberately misleading words of these reactionary pontificators. Sometimes I am upset over the influence their hate speech seems to have. However, as I say, I am an optimist and believe that historical facts and genuine, selfless courtesy eventually rise to the surface. I continue to listen to these poisonous blowhards now and then in order to be informed, to "know thine enemy," as they say, know the potential enemy that lurks in myself, the enemy of kindness. It's never over until it is over, and we can always do something good.

A theme of the film is the gift -- and the burden -- of memory. Your character's flashbacks to a happier time of beauty and calm seem to both sustain and torture him. In one of those flashbacks, your wife, played by Charlize Theron, argues that mere survival isn't enough for her. Living in utter fear and deprivation, she seems to feel, is not really living. Your character doesn't agree. Do you?

I don't, but I understand her point. By the way, I think that the movie makes it slightly clearer than the book does that her point of view is the most logical, rational one in that world apparently devoid of hope. Charlize did a very good job showing us the sincerity and truth of her character's position. When her character essentially asks mine how and why I plan to survive in a toxic environment populated by murderous rapists and cannibals, my character does not really have an answer. It is his instinct to survive and protect his son that drives him. While he may not know exactly how he or his son can manage to survive, he definitely knows why it is worth trying. The simplest way to say it, "sappy" as it sounds, is that he understands, as does his son, that the impulse to be loving is reason enough to live on.

Quite a bit, but all in Spanish. I am still fine-tuning them, and the translations I am making into English of them, so maybe I will wait a little longer to offer them.

How do you say "apocalypse" in Danish?

From the Bible, it is "åbenbaring," but the more-or-less scientific term is "apokalypse."