Actors, Director Of 'The Road' Focused On Telling A Love Story 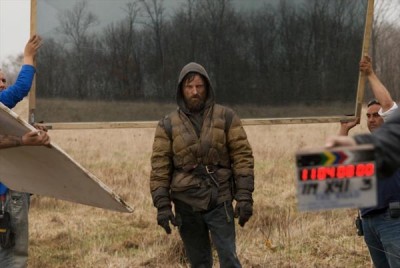 In The Road, the post-apocalyptic world is simply the canvas to see how people behave. Do they turn into thieves and cannibals or do they "carry the fire" -- and therefore hope, love and decency -- with them in this extreme environment?
Cormac McCarthy's best-selling book, about an unnamed father and son traveling through the wasteland that is America, arrives in theaters Wednesday.

It stars Viggo Mortensen, young Kodi Smit-McPhee and, in smaller roles, Charlize Theron, Robert Duvall and Guy Pearce. Director John Hillcoat shot The Road in Pittsburgh and elsewhere in Pennsylvania, along with Louisiana, Oregon and Washington.

During the Toronto International Film Festival, long before the special-effects driven 2012, the message of the day was clear: The Road is a father-son love story.

"My job on this movie was to keep this boy alive and to keep myself alive in order to do this," Mortensen said of his character, called simply The Man.

"I know and the audience knows if I'm gone, he's got nothing - no food, no roof, it's cold and there's people looking to eat him. You know, it's about as bad as you can get," he said with a laugh at the obvious.

The boy who calls him Papa keeps him alive and in the present, as much as the dire circumstances do. "Otherwise, the guy I play probably would not have lasted as long. He would just be consumed with sadness and regret and missing his wife and missing the world that was," Mortensen said.

"The kid that Kodi plays doesn't know from green grass, he doesn't know animals unless I tell him about them or show him a picture or describe it."

The Boy, as he's identified, cannot live in the past because it doesn't exist for him. But he can "carry the fire," a refrain that runs through the text and film.

"Carrying the fire means being human. No matter how much is taken away from you, having a certain ethical standard, I guess," said Mortensen, an Oscar nominee for Eastern Promises.

He acted fatherly toward his young co-star at a press conference, explaining an unfamiliar term and joking, "You're getting out of control" at another point.

Just as he had in Pittsburgh, Mortensen took care to praise Kodi, who he considered his partner rather than a child actor. Turning to Duvall, who joined the cast for two days, Mortensen said, "I remember when you came out there, after a few minutes of working with him, you go, 'Where'd you get the kid?'"

Melbourne, Australia, where the 13-year-old Kodi, brother and son of actors, lives with his family. He shone in a TNT miniseries based on Stephen King stories and bowled over critics with Romulus, My Father.

Mortensen and Kodi bonded over Bodies ... The Exhibition at the Carnegie Science Center, salt-and-vinegar and chili-flavored crickets at Mexican restaurants in Pittsburgh and Kodi's pranks, sometimes at the expense of cinematographer Javier Aguirresarobe.

Wintry days were short and the film demanded a "miserable" look, making Aguirresarobe the most stressed-out person on the set many days.

"If the sun would even hint at showing up that day, he would be, like, literally screaming at the sky," Mortensen said. As a photographer (and poet, painter, publisher and musician), the actor marveled at how Aguirresarobe "painted this movie" while Hillcoat said the Spaniard teased lyrical beauty and gentle compositions from the terrain.

Hillcoat co-opted the obvious and often-used word for the exterior world he created. "The word 'bleak' that keeps coming up, I don't even understand it," the director said.

"I mean, I can intellectually understand it. Emotionally, I don't understand it because for me, emotionally, it is this incredible love story. When I read the book, it made a profound impact on me."

In fact, he dedicates the film to his son, Louie, a third-grader in England where they live.

Hillcoat conceded being separated was the hardest part about making the movie, over and above any logistics. "It was quite ironic, here I was making a love story about a father and a son and missing my own son."

He brought Louie to Pittsburgh where he learned to ice skate Downtown and developed a fondness for hockey games and pizza at Enrico Biscotti in the Strip District. "I have to say, if you can pass it on somehow, the people in Pittsburgh were just fantastic."

It had been Pittsburgh's bare trees that helped draw the production. "We wouldn't have been able to film there if it wasn't for the deciduous trees losing their leaves in the winter because obviously the world we had to create, we wanted it non-specific and yet familiar, like in the book."

Although a Thanksgiving 2008 release initially was floated, that was never realistic and Hillcoat hinted as much while filming at the old Benkovitz warehouse in the Strip District in April 2008.

A year and a half later, he said, "One of the frustrating things about this is that there was such expectation about this book, and I understand that but unfortunately, that release date was way over ambitious.

He didn't want to compromise the film and neither did the producers or distributors. "So it did push it into this year and yet we didn't want to release it as a summer movie and we needed these sort of festivals, we wanted these festivals to launch it. Cormac always agreed with that, he always thought it needed Cannes or Venice to launch it." In fact, it had its world premiere in Venice and then went to Toronto.

As with the book, the film provides no explanation for the end of life as we know it.
The question of "What happened?" is irrelevant, Hillcoat said, because the story is about the journey. "If, God forbid, anything happened to such a degree, there wouldn't be the analysis ... anyone that survives would try and keep surviving.

"It's how we behave as humans what makes us human. Do we descend into animals or do we attach ourselves to what makes us special?"