On The Road With Viggo And Kodi 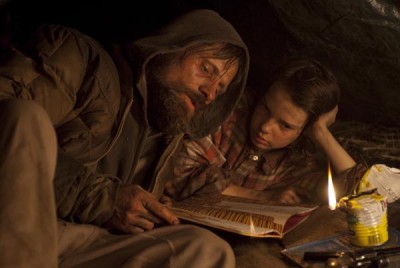 Image Macall Polay.
© 2929/Dimension Films.
Viggo Mortensen, 51, and Kodi Smit-McPhee, 13, are the co- stars of the post-apocalyptic drama The Road, and when they talked about the film at the Toronto International Film Festival in September, they did it together. It was something Mortensen insisted on. The joint interviews felt like you were eavesdropping on a friendship in progress, or maybe a comedy routine that was being developed.

Mortensen and Kodi play father and son in the film (Charlize Theron has a small role as Mortensen's wife). In the story, based on a Cormac McCarthy novel, some terrible event has happened - a nuclear bomb? an environmental disaster? - sending The Man and The Boy on a long trek through blasted forests seeking food, warmth and shelter from marauding bands of cannibals.

"It was great to have someone who would go anywhere with you," said Mortensen.

"Oooh," said Mortensen, pretending to flinch. Then he added, "You weren't half bad."

Mortensen is a huge fan of Kodi's, an Australian actor who was 11 when he made The Road. "I can't say I've had a better acting partner, regardless of age or years of experience," he said. "I really respect him and I think everyone on the crew felt the same about Kodi. Robert Duvall (another of the movie's actors) did."

Kodi, whose father is an acting coach, flew to the U.S. to audition for the role. He read the script, then picked up McCarthy's novel at the airport.

"Did it make you sad?" Mortensen asked.

"Yeah, it did," Kodi said. "Near the end, it was pretty much the same (as the screenplay), so I got the same feeling, which was good. . . . It's just like that thing when you watch Titanic. It makes you cry, something that gets you inside. It's pretty sad."

Mortensen turned to me and said, "It was amazing to have someone of Kodi's age who could go to those places - who could have fun and keep things light, which was good for all of us on the set, but when he needed to, he could go all the way. It was raw and it was really full, what he was doing. But he's a kid. He could still have fun, but he had a very good approach to acting."

He added that The Road wasn't "just another movie," but rather a team effort to adapt a difficult story. "You felt encouraged," he said. "There's nothing like, as an actor, whether it's your acting teacher or your friends or your audience or the crew, you feel that 100 per cent unspoken support." Then he turned to Kodi.

"Didn't you feel like the crew was into this?" he asked.

"Yes, because they were into the book and it's kind of like seeing it being made," Kodi said.

Mortensen said he got a similar feeling on the New Zealand set of Lord of the Rings, the movie that turned him from a supporting actor into a movie star. "There was an intimacy there, too, and a support that you felt because people were really into it," he said.

Kodi asked him, "Did you have (the) same relationships with people?" and Mortensen replied, "Only because it was so long, we were there a long time, and New Zealand is not a huge country; it's not like Australia, which is enormous. We kind of got to know everyone eventually pretty well. It was pretty tight. But it was much bigger." He said months would go by when he wouldn't see the hobbits, "so it was different in that sense, but there was a good family feeling, in spite of the size."

When Mortensen and Kodi talked, you felt some of the family feeling of The Road. Director John Hillcoat searched everywhere - the U.S., Canada, Britain - looking for a young actor to play The Boy, but Mortensen was an easy choice as The Man.

"I was trying to think of an everyman, yet someone you could really buy as credible in making that journey," Hillcoat said. "Actors come with baggage, as well. Sometimes that baggage can help, like Mickey Rourke in The Wrestler. His baggage was part of the performance. With Viggo, there's something slightly elusive about him, and he has quite a wide range, and yet, also, there's this real physicality about him. And there's this tenderness.

"And his face also reminded me of Grapes of Wrath, the Dorothea Lange photos of the Great Depression, Midwest people struggling with the collapse of the environment and the economy."

Back in the room with Kodi, Mortensen was recalling the first public screening of The Road at the Venice film festival.

"It was an 11-minute standing ovation, but not just that: They all turned around as they were clapping, and people all in front of us were turned around looking, and many people had these peaceful smiles but with tears running down their faces. It was amazing."

When the movie showed at the Telluride film festival in Colorado, Kodi said he liked the question-and-answer session later. He remembers people asking him what was the hardest part of making the movie. It was a scene when The Boy and The Man go into a river to bathe. "They would have seen that, but they wouldn't know how cold it was," Kodi said.

"But he stayed in character," Mortensen said. "I looked at him, I'm this far away, I'm looking at him like I'm looking at you, and I'm like, `Oh, something's different right now.' But there was something he was saying without saying it; he was saying that, `I'm still in character, let's keep going.' He wasn't saying `I've got to go.' And that changed. . . . We already had a strong relationship and things were going well, but that was pretty much a bonding moment. It took it to another level."

Kodi said, "It was real. That was the next level up."