By Juan Luis Caviaro – translated by Zooey (with additional transcription) 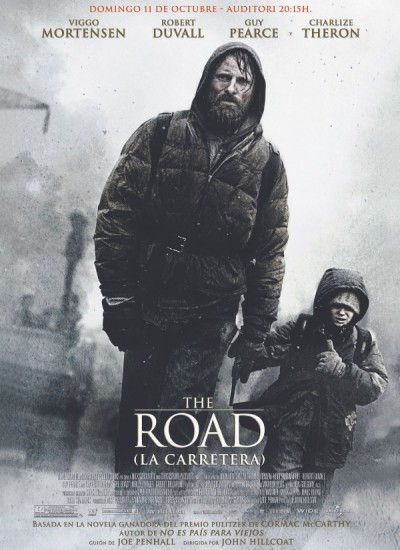 Movie Poster (Sitges)
Image Macall Polay.
© Dimension Films/2929 Productions.
The last day in Sitges was for the The Road. The film, an adaptation of the Cormac McCarthy novel, was shown in the morning, at the 8:30 screening, and at night, being the closing event of the 42nd Festival. At 1:30, we arranged to attend a press conference at which there would be Viggo Mortensen and John Hillcoat, the leading actor and the director.

Having been at other press conferences, believe me, you can tell when a star is coming. The press conference doesn't fit in the room and the nervousness is very palpable, everyone wanting to have the best location and the best visibility. (Many seemed to be the actor's fans). After a little delay, finally Hillcoat and Mortensen entered, quickly receiving a wave of flashes. Ángel Sala said thanks to everyone, presented the guests and began the round of questions. There wasn't much time, and I don't believe that the few questions that were asked (some ridiculous) provided an opportunity to make the most of the session, but fine, at least I was able to hear and see up close one of the best actors on the planet, and to know a little more about the film, which, by the way, from what I heard had been very well liked and not just by me.

Viggo, the film made me think of "Man is a wolf to his fellow man." Is that what you think?

VM: Man can be a wolf and also a lamb. In the novel, as in the film, which is pretty faithful to it , what's being expressed is the idea of "el hombre bueno," the good guy who is defined by his choices. To choose love, or to choose hate. We all can do good or bad things.

Hi, Viggo. Your character has a pretty bad time in the film. What would you have done in his situation?

VM: Well, I am stubborn. I would try to bear everything possible. You never know. These are the situations we go to the movies for, the kind recounted in this story. What's important is why, why do we survive? To survive and nothing more, or is there something else, beyond that? A choice, as I mentioned before.

Was the filming very difficult and how did you keep your good humor? And then to Viggo, the director of Solomon Kane said you were his first choice, if you might tell us something about that?

JH: Making the film was very difficult. We worked in outdoor locations, in winter, it was hard. But it gave meaning to the film. It helped to tell the story and it helped the crew. We filmed in 50 locations, had to move to four different states. This gave more dimension to the film.

[JH transcript from video: Well, yeah, it was about as easy as the journey of the father and son. (Smiles) No, we were filming in real locations in the middle of winter, so that was tough but I think actually working in those landscapes gave the meaning of what we were doing more poignancy and I think it helped both the crew and the cast to work off this environment. So I think ultimately, even though it was very tough and, you know, conditions were difficult logistically - there were 50 locations, we moved across 4 states - I think that it added another dimension for all of us.]

VM: Let's see if I remember...that other directors want to hire me. Well, as an actor that seems very good to me; there's a shortage of work. [laughter]

For both of you: The film is very scary; what was most terrifying for you?

JH: To find oneself totally negated by fear. It is difficult, to be under so much pressure, to keep one's humanity, to do the correct thing.

[JH transcription from video: Being shut down by fear and facing - it's also a story about facing mortality, around mortality as a species as well as individually. So that's a tough one. And under pressure, losing one's humanity. Being able to make the right choice and rise above things.]

VM: I fear to fail as an actor. The challenge was to find a way to get naked from the inside, to be honest with the feelings, more than in other films, other stories. It was important to find the child, to find a genius, actually. Even with the work of the photographer, of Javier Aguirresarobe, the film crew, the director's preparations... even with all this work, without The Boy, we would have nothing. And also that I wouldn't have a companion in the film who could pull reactions from me. It's good to have a little fear as an actor, to learn, to do something new and interesting.

For Viggo: How did you prepare physically for the role?

VM: Well, I left the tortillas on the side. (laughs.) No, it is necessary to eat a little less. You have to be thinner. I listened to music, poetry, watched films. I did everything I could do that I believed would help me enter the emotional state. A state of grace with The Boy. But the external things were not the most important. Of more importance to the process, as I say, is to find the courage to tell the truth without words.

Hello, Viggo, good day. For you, which is more complicated, maintaining the safeguards to your private life or interpreting a role? I ask you because if there is something that makes you an enigmatic and powerful actor, the key appears to be in the methods you use to avoid getting worn out as an actor.

VM: The truth is, I don't think about it. I protect myself, out of respect for my family and my friends. I am not interested in calling attention to myself that way. It is really difficult to be well-behaved and admit your mistakes. That also really counts in telling this story well. To be honest with the Boy. It created a very strong link, a complicity, in everything we lived through. It's truthful and I believe that's apparent. That can't be faked.

How was it to work with a child so young and to tell him such difficult things?

JH: In terms of logistics, it was very difficult. My great fear was finding a boy like this, that can take us on such a dark journey. I talked a lot with Viggo about that; it was very important. And when we found him [the boy's name is Kodi Smit-McPhee] it was a blessing. It was a gift. I learned a lot from him. There was a beautiful moment. In the film, when the Man is at the point of crossing a moral line, in the script, as in the novel, it said that the boy should cry inconsolably. We tried that but it wasn't working out. He said that it didn't work, that what he felt was anger, that he couldn't cry. So we did it that way. And he was right. He was incredible.

[JH transcription from video: Well yeah actually, in terms of logistically making this film, going back to your question as well, my greatest fear was the kid, how do you find a kid that can go through this and take us on this journey? But we were blessed with Kodi. He was a great gift, like the material itself. Viggo and I spoke about Kodi more than anything else, by that I mean not Kodi, but the Boy because we shared that same fear. And you know I learned a lot from him as well. His instincts were razor sharp. There was a wonderful moment where he, he stands up for himself once he has the encounter with - the Man crosses a moral line. And as scripted, and in my own head, and from the book, he was crying, emotionally distraught, and I was really pushing him to go in this direction. And he just couldn't get there. And it was because his instincts were telling him, "No, I feel anger." And he was right. He's amazing.]

VM: I want to recount something, so you'll know what he's like. He's a boy, and during the filming he had to entertain himself. It was complicated, it was cold, snowing. But he made fun of all that in a good way. He showed himself to be mature and ingenious during the filming. Something very funny happened with Robert Duvall. After filming a couple of takes, he approached me and asked me where we found this kid; he's brilliant. Then I went to see Kodi and I asked him how it had gone. He told me, "The old guy's ok!" He is Australian, but you don't notice it. People think he's from the United States. And he also speaks pretty good Spanish. During the filming, Javier was the one who suffered most, with the weather, the gray skies, and he was on his knees, begging, cursing the sky. The child cracked up laughing. There was another Argentine kid with us and between him and me we taught him to speak...good Spanish. [laughter]

We've seen several movies about the apocalypse. What do you make of that?

JH: Things are happening in the world. We were living in a bubble. But now we have climate change and everyone is more conscious.

[JH transcript from video: Well, I think there's been a lot going on. I think we've all been living in a bubble. And there's a lot of things, the chickens have come home to roost. With the environment, certainly, we're all witnessing climate change, now; we're much more conscious. Violence in the world has entered our doorsteps again. So I think it's the very real fears that people are more conscious of now.]

VM: I am optimistic. It is the end of the Festival, but not of the world...and not of the Argentine team. [laughter]

It's said there are no movies without sponsorship. Is that why a Coca Cola appears in the film?

JH: The Coca-Cola is part of the novel. It was included because corporations are heartless.[Sic - see actual transcript below.] It wasn't for money. In fact, we had problems. We wanted to be faithful [to the book] and we contacted them, but Viggo can tell that better.

[JH transcription from video: That's pure context. That's from the book. The Coca-cola. The film was and the book was a deliberate comment about consumerism, you know, how meaningless these corporations are in a different context. And there was no sponsorship. In fact we had a real problem getting permission to use Coca-cola and we wanted to be faithful to the book, 'cause it's an iconic moment. And actually it took Viggo himself to, well, maybe you (to Viggo) should tell that story]

VM: For me, I'm not interested in making an advertisement. Except that in this film, here we are. The Coca-Cola is in the book. I entertained the idea that it should be Diet Coke. [laughter] It would have been funny. But we had problems. They only put their products in films for the whole family. So they gave me a number and I called them. I told them everything. It's going to be great. Cheaper, free. As if it were ever free at the World Cup! [laughter] If it was Pepsi it would not be like the book. We filmed with several, with Pepsi, with Fanta...Things went better with Coke. [laughter] We sent them the scene we filmed and they were impressed. And they agreed...