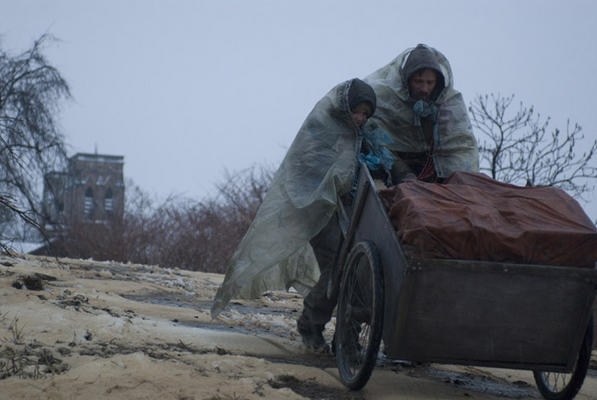 Image Macall Polay.
© 2929/Dimension Films/MGM.
John Hillcoat's superb adaptation of the prize-winning novel by Cormac McCarthy leads its audience on a road to nowhere. The route takes us through blighted forests and past derelict homes, all the way to a grey and barren ocean that breaks against the shore.

Outside the cinema at the 66th Venice film festival, the sea is bright and blue and inviting. But for how much longer, exactly? The implicit message of McCarthy's post-apocalyptic fable is that we are all already halfway down The Road. It is perhaps telling that the film's makers chose to reject computer-generated effects in favour of shooting at real American locations: the ghost neighbourhoods of Pittsburgh, the "Abandoned Pennsylvania Highway", and the suburbs of a storm-ravaged New Orleans.

Hillcoat's drama follows the trudging progress of two unnamed survivors of an unnamed catastrophe - a man (played by Viggo Mortensen) and his 10-year-old son (Kodi Smit-McPhee) - as they plough south and forage for food. But the way ahead is fraught with danger and provisions are few and far between. In the end all they have (and by implication, all the rest of us have) is each other.

What a haunting, harrowing, powerful film this is. Before last night's premiere there were rumours that its lengthy post-production period (the movie was actually shot back in February 2008) spelled signs of a troubled, sickly production. By and large, those fears have now proved to be unfounded.

Admittedly, in dramatising McCarthy's bare-bones prose, Hillcoat sometimes runs the risk of over-dramatising (I could have done without the plaintive music and the unnecessary slabs of explanatory voiceover). But no amount of window-dressing can distract from the tale's pure, all-consuming horror. In one particularly chilling scene, father and son stumble upon a pleasant, well-kept home on the outskirts of town. The house, it transpires, is commanded by a gang of cannibals that farms human beings in the cellar beneath the kitchen.

At such moments The Road paints a brutal portrait of a dying planet stalked by starving, desperate men. And yet there is a tenderness here too, and it shows its hand in the subtle, moving interplay between the two main characters. Mortensen is perfectly cast as the gaunt, wasted hero, while Smit-McPhee copes well with a demanding role as his soulful offspring, forever willing to share his meagre meal. Although they walk together, we have the sense that these two are ultimately headed in opposite directions. Born into the old world, Mortensen's father starts out strong and then begins to fade. Born into the new, his son grows in stature and picks up the baton. He presses on down the road, hungry, filthy and wonderfully sane; a glimmer of hope for the human race.