Source: The Times
The actor Viggo Mortensen talks about The Road, a post-apocalyptic story about survival and death 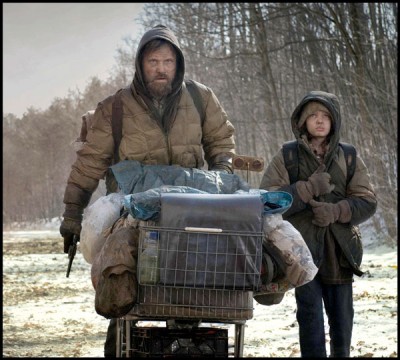 Image Macall Polay.
© 2929/Dimension Films/MGM.
Viggo Mortensen has always had a thing about death. The 50-year-old Lord of the Rings star has never liked it. Always feared it. Hated the fact, even as a child, that his life would one day, arbitrarily, end. "It is unfair," thought the mini-Mortensen, at six years old, "that someday I am going to die." This knowledge spurred him forwards through the variegated careers of an artist, poet, painter and eventually a blockbusting actor. But still the death thing remained. "I no longer resent death," thought the grown-up Mortensen. "But it won't go away."

And then came The Road, a movie utterly steeped in, well, death. A bold and faithful adaptation of Cormac McCarthy's Pulitzer Prize-winning novel, The Road tells the post-apocalyptic tale of a father, simply called The Man (Mortensen), and his son, The Boy (Kodi Smit-McPhee), and their brutal journey down through the perilous Eastern Seaboard.

Here, while dodging the last few demented and mostly cannibalistic denizens of a physically ravaged planet (the cause of the destruction is never explained), the emaciated father must try to impart to his son the essential need for human goodness in the face of abject nihilism and savagery. Oh, and on top of everything else, he is dying.

"I know! Why would I want to go there?!" says Mortensen today in a downtown Toronto hotel room. He is sporting silky shoulder-length hair (an effeminate touch that is duly balanced by the hyper-masculinity of his granite-like jawline), wears a blue T-shirt and jeans, and speaks quietly and thoughtfully, and often at length, on every question, hammering his subject from all sides until it submits to the truth. "I knew that if I did the work properly, I would end up going to places and looking at things that I normally would not," he continues. "But I went to those places, and I looked at those things -- at mortality, at family, and at the prospect of a future without me." He chuckles ruefully, concluding: "And I'm OK with it now."

And, indeed, it is true that the film, which was directed by John Hillcoat (The Proposition), is a journey into dark places. Yet it's also one of hope and sublime beauty, seen exclusively in the relationship between Man and Boy, in soft moments of tenderness between them, and in knockout tear-jerking lines such as "My boy, my boy, you have my whole heart!" Mortensen explains that this optimism flourishes because the film works on different levels. It's not just a movie about a post-apocalyptic free-for-all, he says. Nor is it a movie solely about fatherhood.

"Although that was initially my entry point," he says. "Having been a father myself, and having had a son who was in some ways like the boy in the movie. But really, it's a film that asks: 'When everything else is stripped away, what does it mean to be human? Does it just mean taking care of your food and those few people you want to protect? Or is there some other reason to be around?'"

Despite this thematic intrigue, the film mostly works because of the complete conviction of the two leading actors. Mortensen in particular, ashen-faced and skeletal, gives a harrowingly convincing turn. The actor, famous for his method research, once stayed entirely in character, as a mute, refusing to speak for the full four-week shoot of the thriller The Passion of Darkly Noon. For The Road, on the film's wintery Pennsylvania locations, according to producer Steven Schwartz, Mortensen would sleep in his clothes, and stay out in the freezing rain in order to remain "in the zone". "He paid attention to every detail," says Schwartz. "If the shoes weren't wet enough, he would spray himself. He was totally absorbed and obsessed with the part. He became The Man."

Typically, Mortensen himself is humble and quietly dismissive of his own legend. He will coyly admit that the shooting on The Road was tough. "I've worked on other movies that involved physical hardships, but in this one I was in a survival state of mind, keeping myself hungry, thinking about the past," he says. "I've never been in a movie where there was as much pressure on an emotional level. It was difficult, which it had to be to work."

And still, the man who moved to Moscow for four weeks before playing a Russian mobster in David Cronenberg's Eastern Promises will confess that there is often a kind of inspired madness to his method. "There is a strange wizened quality to my face in The Road that is beyond any make-up, and beyond any explanation," he says. "It happens in movies, every once in a while. You go further than you intended. There are looks on my face in that film that have only come from a great leap of faith."

Mortensen's powerful screen presence is perhaps all the more confounding because he was a decidedly late bloomer. There is no stage-school brat past here. In fact Mortensen, the eldest of three boys born to a Danish father (also called Viggo) and an American mother (Grace), had an unusual and peripatetic upbringing that was entirely free from acting ambitions.

Instead, raised in Argentina until he was 11, Mortensen moved to New York State to be with his mother when his parents divorced and his father returned to Denmark. During this time, he says, he had little knowledge of movies, let alone acting. Later, in his early twenties, after studying Spanish at university in New York, and while a truck driver in Denmark, he learnt about acting by devouring, Tarantino-style, the back catalogues of art-house masters such as Bertolucci, Ozu and Bresson. "I started appreciating movies for the work in them, and began wondering how it was done."

Mortensen then moved back to New York, landing in a small acting class called the Robertson's Theatre Workshop, and thus began a decade of hard graft, nabbing bit parts and theatre roles. He grabbed Hollywood's attention playing the wildcard Vietnam Vet, Frank, in The Indian Runner, yet his ascent to stardom was slow, only truly defined by the success of the Rings movies at the start of this decade. The gaps in work, thus, allowed for the development of Mortensen's skills as a painter, poet and musician -- he currently exhibits internationally, has published several volumes of poems, and records music with LA-based guitarist Buckethead (aka Brian Patrick Carroll).

These days, Mortensen lives between New York, Denmark and a ranch in Idaho where he keeps horses. He is choosy about the roles he takes, but says he never contemplates quitting the business. "I don't have anything else lined up, but that doesn't mean I'm quitting," he says, dampening down rumours of his imminent retirement. "Maybe I should bulls*** like other actors, and say that I've got 12 movies on the way, but I don't."

He does, nonetheless, drop some tantalising hints, acknowledging that there is scope for a guest appearance in a long-awaited adaptation of The Hobbit. At the moment, though, Mortensen says that he's not bothered by the intricacies of his own career moves. Still recovering from The Road, he is a man who finds happiness in the simplest things. In fact, he says, reflecting on a film that has finally tackled his own death demons, "after doing this movie, and seeing this movie, I'm just happy to be alive."