Source: The Big Issue (Australia)
Actor Viggo Mortensen (who is also a poet and pianist) found fame playing Aragorn in The Lord of the Rings trilogy. Now, without long hair and horse, he confronts moral dilemmas in Nazi Germany. 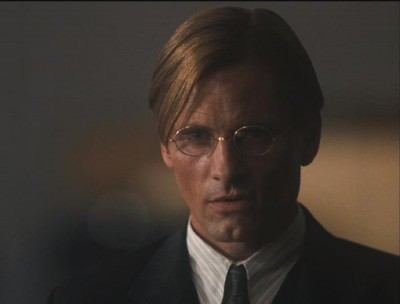 © Good Films.
One morning during last year's Toronto International Film Festival, word spread that Viggo Mortensen was playing the grand piano in the foyer of the hotel that was the festival hub. At first, throngs of publicists and celebrities whisked past, oblivious to the identity of the piano player. By afternoon he was still going and, having realised that the dressed-down pianist was one of Hollywood's leading men, an audience had gathered.

Such moments of transient anonymity were a throwback to a time before Mortensen's appearance in The Lord of the Rings trilogy (2001-03). Now 50, Mortensen was born in New York City to an American mother and Danish father, and spent his childhood living in Venezuela, Argentina, New York state and Denmark. (He is fluent in English, Spanish, Danish and French, and apparently not half bad at Norwegian, Swedish and Italian.) Mortensen came to acting late - he only attended acting school after working for some time as a truck driver in Denmark.

Having made his debut film role as a young Amish farmer in Peter Weir's Witness in 1985, Mortensen had a few critically acclaimed films behind him by the mid-90s. These included main roles in The Indian Runner (1991), Carlito's Way (1993) and Jane Campion's The Portrait of a Lady (1996). But it was only when he took the role of the sensitive long-haired warrior Aragorn in Peter Jackson's Rings trilogy that Mortensen found a mass audience. Since then, he's compounded his popularity with a string of standout performances in A History of Violence (2005), Eastern Promises (2007) and last year's Appaloosa - very different parts that have demonstrated he is as much brain as brawn.

Still, it needs to be said that the impromptu recital in Toronto wasn't an attention-grabbing stunt. That isn't Mortensen's style. It's just that when Mortensen sees a piano not being used, he has to take the opportunity to play. "There are pianos everywhere, just there for the playing," he explains softly while promoting his latest film, Good. This observation is as much fact as an esoteric statement. Constant journeying around the world has revealed as much to him, and while preparing for his part in Good Mortensen discovered that - like his character in the film, John Halder - he finds a refuge in music.

Mortensen likes to explore, so while rehearsing and filming in Budapest he took to the streets and came across a piano-tuning shop. "It was crammed with beautiful old pianos," he recalls. "There was an old upright one in the back room that [the piano tuner] was willing to rent out, so I had it moved to my hotel room, where I could fumble around on it without bothering anyone." Mortensen started tinkering on it every day as a way to unwind. Eventually, the piano became part of his preparation for filming. "Every night I would play and just think about him. It was an unusual way to get into Halder's mind, but it was very helpful ...unconscious."

Based on a play by British writer CP Taylor, Good - directed by Vicente Amorim - is set in Germany in the 30s, but it is more than a story about Nazi Germany. The film examines how good people can be swayed into the arms of evil, but its essence is about the moral turnings of people everywhere, at any time. Mortensen agreed to be part of the film when several Holocaust films were also doing the rounds. "I wasn't worried about that, although I was worried that we'd get lost in the shuffle," he says, referring to the big marketing budgets of films like The Reader and The Boy in the Striped Pyjamas. "What made Good different was that there were no 'extraordinary' events - no big fighting scenes, gas chambers or killing sprees. None of the things we traditionally see in films about the Holocaust."

Neither is it a film made with the "benefit of hindsight", as Mortensen puts it. Widely arcing stories that focus on the atrocities committed by the Nazis often frame Germans as evil-doers. When we look at them it's easy to say: we're not like that.

Good offers a different approach. It focuses on the events leading up to World War II, when many ordinary people didn't really see what was coming. Mortensen's character is one of those people: a writer and a teacher who permits himself a small moral concession, then another and one more again, until one day he is forced to put on a uniform. John Halder is an essentially good man, but by the beginning of the war he realises he has inadvertently helped the Nazi cause. Then, as Mortensen says, "the film ends and you don't know what happens to Halder. He doesn't become a hero or a villain - it's completely open. It's really up to the audience to contemplate - what did he do?"

The strength of the film, as Mortensen explains, is in its exploration of the question: how do you draw the line that you won't cross? "It doesn't limit itself to Nazis. It's about all of us. It's [saying] we have to pay attention, and it speaks to the universal problem of what happens when you don't pay attention."

Good reminds us that people have to be vigilant. It's an idea that has resonance with contemporary world politics, and it synthesizes neatly with Mortensen's reluctance to rally blindly behind Barack Obama. "Whether it's Germany in the 30s or the US or Australia today, it's always important for people to keep an eye on what the government of the day is doing. We can't just sit back and blindly trust that once we elect it a government will speak for us. Things change very quickly," he says. "Look what happened the last seven years under Bush, Blair, Howard and all the rest. In retrospect it's easy to say if we'd known then what we know now...but that's what this film is saying. Just pay attention to what's going on."

That's not to say Halder doesn't think about his actions. On the contrary, it's his thoughtfulness that makes his journey all the more unsettling. While Halder's internal complexity seems to represent a departure from the bravado-driven characters Mortensen has played in the past, he says the role was more like a "shift in gears" than a totally new challenge: "There are different degrees of that internalness in different characters. Even Aragorn had his internal shades."

Mortensen has his own "internal shades", a quality that almost overpowers the fact that he is strikingly square-jawed and faultlessly buff. Thoughtful, patient and naturally polite, he digests questions and willingly unravels his thoughts as he goes. He likes taking away lessons from his experiences and, as he did with Good, often takes the opportunity to explore new cities and cultures when working on a film.

In Budapest, Mortensen found his way inside Halder through the piano, then took a CD of piano compositions - improvisations - home with him. Subsequently, Time Waits for Everyone was released through his own company, Perceval Press, a personal imprint for Mortensen's other creative endeavours: poetry, photography and music. He curates Perceval carefully, choosing obscure works that might not otherwise be seen.

He gives the impression that he makes thoughtful decisions about his own work, too - regardless of medium. The notes accompanying his CD extend an idea he has hinted at earlier: "There are pianos everywhere, there for the playing, there for the sound of places, to turn the soil, to uncover the roots of things, as road maps to our true motives, instructing, retelling, drawing from us..." There have been numerous photography books, exhibitions in Iceland and Denmark last year, more travelling and more movies. Acclaim - or recognition, at the very least - comes with most of that now. But, as with the piano playing in Toronto, he's not really doing it for anyone else. It's his own way of exploring the world, asking questions of himself and paying attention.