An Interview With Viggo Mortensen

Source: Matt's Movie Reviews
While in town to promote his new film, WWII drama Good, I had the opportunity to chat with Oscar nominated actor, Viggo Mortensen. 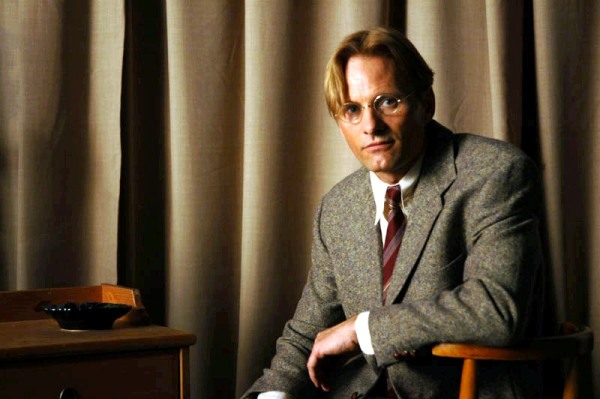 Image Larry Horricks.
© Good Films.
One of the more exciting actors out there today, Viggo continues to turn in fine performances as evident in his portrayal of a literature professor, who gets swept up in Hitler's national socialism, and finds himself in league with pure evil.

Not only did Viggo find the time in his busy schedule to make space for our interview, but he graciously did so while in commute to a live studio interview! Not many people would give up their spare time like that, let alone in such an intimate setting.

How would you describe your characters attitude towards his surroundings? Is it ignorance? Dispassion?

I think he's aware of what's going on, but he's a bit overwhelmed. I think that at first it is understandable that he has some questions. He asks for assurances that he doesn't really have to do anything in particular to be a member of anything. He just has to write this paper. And then the guy points out that "you are not a member"; and then another guy - Steve Mackintosh's character - says he has to be a part of the (Nazi) party...it's just a gradual process that is actually understandable. It doesn't seem that he has to do much to be a part of the whole thing; it's just a little windfall. (He believes) he's gonna make a little more money for doing something he does anyway. And maybe that's not a morally bad thing. But at a certain point, yes, he does realise, and he runs from it, he denies it because it's easier not to face up to what he is doing wrong, to the fact that he's on the wrong road.

Do you see many similarities with your characters apathy in his situation, and the apathy of current day citizens towards global warming and human rights?

Yeah, could be. Certainly there are things we know better. If nobody's watching you, and you want to get rid of a plastic container, and you have to walk another two blocks to dispose of it properly and recycle it, if nobody is watching and you throw it into the garbage can, that's one of those little moments that happen all the time to people. Or, you bump into somebody or bump ahead of them in queue, and they don't complain too much or nobody notices, it's still wrong. I think this movie speaks to that it's about the little decisions that we make that seem inconsequential, moment to moment, in a relationship; family; job; certainly around strangers. It's these things that add up and say who you are. That is what this movie says: it is worthwhile paying attention.

You are active politically both in America and Denmark. Where do you credit your zeal for your activism?

Well, I try not to limit it to only Denmark and the United States. But, I'm just curious about life, and if I see something that's ...I inform myself. If there is something I see is unfair, I try to learn as much as I can about it. And for what it's worth, if someone were to ask me about it, I don't hide my feelings.

Your choices of roles are varied and eclectic. What are your criteria in choosing a role?

I like stories that are challenging, things that I don't know about. I like to learn about them, and you can do that in the movies if you want to. If you're lucky you can play different kinds of characters from different times, from different cultures, you know, form different points of view. I think kids do that all the time, naturally, they make believe games and dress up, all that stuff has to do with instinctively interested in the way others think and do, and think about things and do them. And as you grow up, you start to limit how much you do that. You're self-conscience about it; or you don't have time for it; or what's the point? And for an actor it's important to retain that. It's a part of the job, I think. Well, at least for me it is. And if I wasn't an actor I might not be forced to do that, to look at the world from points of view other than my own. Sometimes points of view I would normally not want anything to do with. Not that I like to see myself, or something like that, but as an actor, to be honest, you are making a concerted effort to do that.

Have you ever thought of combining your passions for writing and cinema, and try your hand at writing a screenplay?

Yeah, I have written one and I have an option on a book that I like, that maybe one day I could make a movie out of. But I have to find the time for it. I'm gradually doing less movie work. I haven't signed up for any movies for a year now. I am promoting this movie (Good), and I will be promoting The Road, but beyond that I don't have any plans to do anything. I am very careful as to what, if anything, I step into in terms of any more movies. Not just in terms of maybe I want to direct, but I just want to be a little calmer. The last 5, 6, even 8 years have been a little hectic, and I have managed to do a lot. And I have managed to be part of, or stay in touch with my family. But I have lost touch with some family a little bit with time, and with friends a lot. And you know there are a lot of things that are basic, which I would like to do.

This past year alone, there must have been a dozen or so WWII themed film productions. Why do you think filmmakers constantly turn to this era?

Well, people are rightly of curious about man's inhumanity to man. How can man get to such an extreme? But people are also increasingly aware - which is what I believe Good is about, in some sense - which it's not in particular to Germans, or Germans in that time, or in Germany, that these things can happen. Racism. Genocide. Until the 20th Century, it was the province of academics - a limited few - who specialised in the study of massacres and genocide, and events like that. Once you get half way through the 20th century and after World War II, and certainly into the television and internet age, it's not just academics, but everybody is aware of the fact that it's not an isolated incident, what the Nazis did. Look at Yugoslavia; Argentina; and maybe in a lesser scale, look at some of the things maybe the United States government participated in; the government Australia has participated in, that are done in our names. And we are, to some degree, responsible for that, and you have to admit that at some level. What can you do? Well, do something! I don't know what. But is must be something. And this is something that is not going to just disappear. It's too easy to say: "Look at those crazy Germans. It's not us". That just lets you off the hook. And it sets the table for you doing the same, or allowing it to be done to you.
Top of this page
Last edited: 8 October 2009 04:31:11